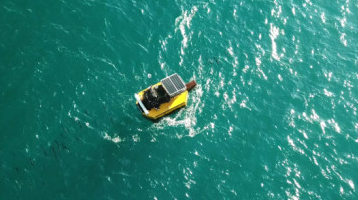 Just 0.5 per cent of the planet’s freshwater is available in lakes and other bodies of water and experts are warning that a water scarcity crisis is currently underway. Climate change is amplifying geopolitical tensions as lands turn to deserts, resulting in humanitarian crises amid the harsh conditions.

Oceans are the most plentiful water resource but salt water cannot be consumed by humans, which leads many experts to one solution: desalination.

The company is quickly gaining international recognition for their technologies that purify ocean water solely powered by the motion of ocean waves. The desalination systems are placed on buoys that are anchored 200 metres to three kilometres from the shoreline, a distance that was chosen based on wave height and sightline away from the coast.

A ‘pumping’ action occurs when the buoys rise and fall with the waves, which compresses the seawater and squeezes it through a reverse osmosis membrane. This results in concentrated saltwater being released back into the ocean and clean drinking water being sent to the coastline through an underwater pipeline that is connected to the buoy.

One point of contention with desalination is the concern about hypersaline water being released back into the ocean.

“When you look at the big picture, there's a lot of freshwater that is flowing into the ocean, namely [from] the Arctic, Antarctica, Greenland — it's all melting. There's more freshwater from ice flowing back in the ocean than there is [hypersaline water] from desalination. And unfortunately, it's not slowing down,” Dragan Tutic, CEO and founder of Oneka Technologies, said to The Weather Network.