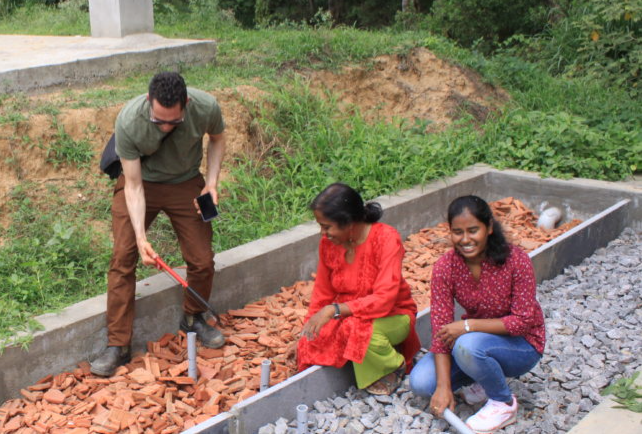 Bengaluru’s water supply is met either by pipelines that draw water from the Cauvery river several kilometers away, or by pipelines that are sunk several feet underground. It wasn’t always like this. In the past, Bengaluru’s water needs were quenched by the many lakes built across the city. Lake water was used for drinking, agriculture, washing cattle and other purposes.

But in recent years, the city’s lakes have become infamous for catching fire, frothing, and becoming dump sites. Many lakes are heavily polluted as the city’s sewage, industrial contaminants and untreated wastewater enter them via stormwater drains, rendering them unusable. Bengaluru generates over 1,100 million litres of wastewater per day, of which only 50% can be treated currently.

A new approach to decontaminating wastewater could be just the solution to cure Bengaluru’s lakes of their pollutants.

“The whole idea is to come up with simple modifications to stormwater drains, into which the wastewater is initially released. With this, you can clean the water as it flows into the drain itself,” says Shubha Ramachandran, water sustainability consultant at BIOME Environmental Solutions Pvt Ltd and one of the team members undertaking this project. The team has named this approach STRAINS, acronym for Strategic In-stream Systems.

“Here the idea is to acknowledge the streamflow, and mimic nature to hasten the process of wastewater treatment in the duration of its flow through the drain,” says Shubha. “As the water passes through the drain, its quality improves.”

Some lakes in Bengaluru have sewage treatment plants (STPs) to treat wastewater, so as to improve its quality before it is released into the lake. However, several lakes with STP facilities do not receive inflows (except overflows from diversion drains during monsoon season), and hence remain dry for several months. In such cases too, in-stream treatment systems can be deployed to treat the dry-weather flows in the drains and allow the treated water to enter the lakes.

The idea was thought out by researchers at the Ashoka Trust for Research in Ecology and the Environment (ATREE). Since the team didn’t have any precedent in the city to follow, they first carried out experiments in their lab.

Priyanka Jamwal, Fellow at ATREE, tested three cheap, easily-available materials – terracotta, gravel and cinder – by exposing them to synthetic sewage. “We exposed them to calculate flow rates, hydraulic retention times, etc., to test which of the materials give the best efficiency for water quality parameters such as organic matter, nutrients and fecal coliform,” says Priyanka. “We found terracotta gives the best efficiency.”

With results in hand, the team wanted to experiment with actual sewage, at a larger scale. They zeroed in on Saul kere in Kaikondrahalli. But as they were constructing the model, they found it was not easy to procure terracotta in the required quantities. Gravel was the second most efficient material easily available. “So then we decided to test both terracotta and gravel side-by-side,” says Priyanka. 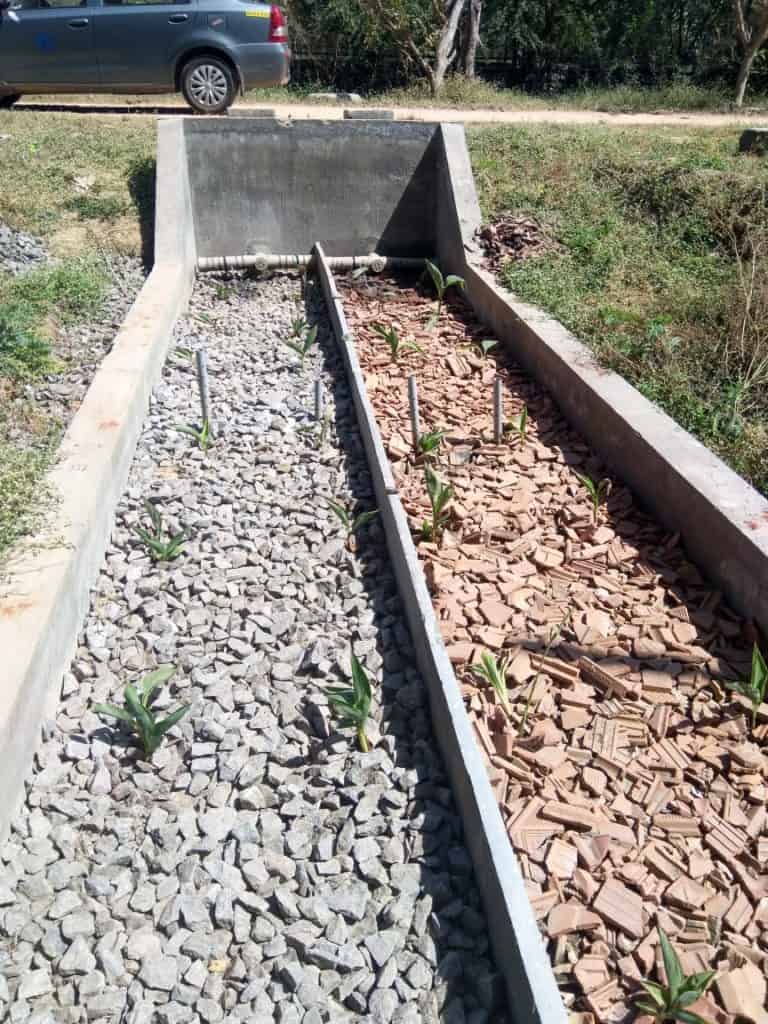 The Strategic In-stream System installed at Saul kere, with gravel and terracotta in either channel. Pic: Daniel Phillips

Sewage would pass through the structures the team constructed in the stormwater drains (image above), before it reached Saul kere. Every month, the team collected water samples at the points where wastewater enters and exits the terracotta and gravel channels, and from two other points in the channels.

The team emphasised on a frugal, flexible and inclusive in-stream approach to managing wastewater in a decentralised manner. “We think about the incorporation of inexpensive local materials, inexpensive local processes that don’t require huge inputs of technology, skills or maintainance,” says Daniel Phillips, a landscape architect pursuing doctoral studies at the University of Michigan, USA.

Easy maintenance of the system was also a consideration for Shubha. “Because, in the long run, you can do many things to filter water, but if it is not easily maintainable it becomes a challenge,” she says. Shubha’s design firm helped locate the placement of filters in the channels.