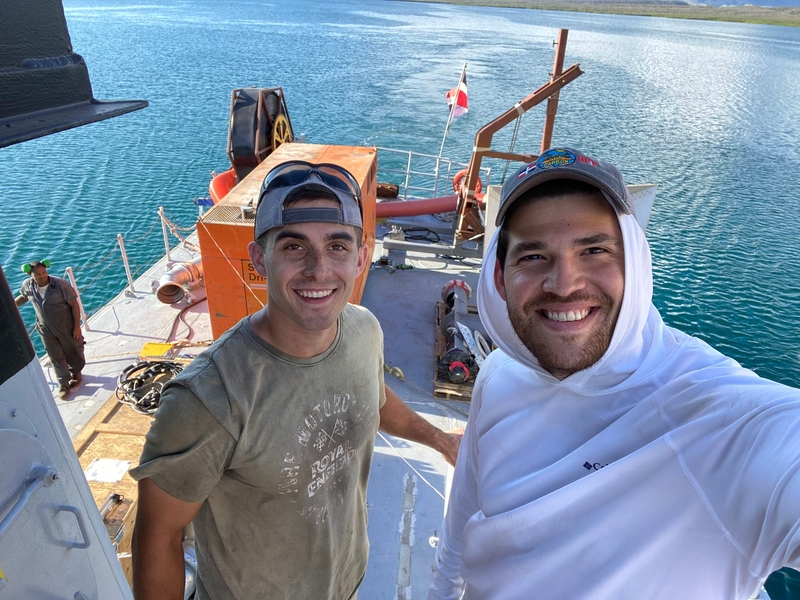 Born and raised amid the natural beauty of the Dominican Republic, Andrés Bisonó León feels a deep motivation to help solve a problem that has been threatening the Caribbean island nation’s tourism industry, its economy, and its people.

As Bisonó León discussed with his long-time friend and mentor, the Walter M. May and A. Hazel May Professor of Mechanical Engineering (MechE) Alexander Slocum Sr., ugly mats of toxic sargassum seaweed have been encroaching on the Dominican Republic’s pristine beaches and other beaches in the Caribbean region, and public and private organizations have fought a losing battle using expensive, environmentally damaging methods to clean it up. Slocum, who was on the U.S. Department of Energy's Deepwater Horizon team, has extensive experience with systems that operate in the ocean.

“In the last 10 years,” says Bisonó León, now an MBA candidate in the MIT Sloan School of Management, “sargassum, a toxic seaweed invasion, has cost the Caribbean as much as $120 million a year in cleanup and has meant a 30 to 35 percent tourism reduction, affecting not only the tourism industry, but also the environment, marine life, local economies, and human health.”

One of Bisonó León’s discussions with Slocum took place within earshot of MechE alumnus Luke Gray ’18, SM ’20, who had worked with Slocum on other projects and was at the time was about to begin his master’s program.

“Professor Slocum and Andrés happened to be discussing the sargassum problem in Andrés’ home country,” Gray says. “A week later I was on a plane to the DR to collect sargassum samples and survey the problem in Punta Cana. When I returned, my master’s program was underway, and I already had my thesis project!”

Gray also had started a working partnership with Bisonó León, which both say proceeded seamlessly right from the first moment.

“I feel that Luke right away understood the magnitude of the problem and the value we could create in the Dominican Republic and across the Caribbean by teaming up,” Bisonó León says.

Both Bisonó León and Gray also say they felt a responsibility to work toward helping the global environment.

“All of my major projects up until now have involved machines for climate restoration and/or adaptation,” says Gray.

The technologies Bisonó León and Gray arrived at after 18 months of R&D were designed to provide solutions both locally and globally.

Their Littoral Collection Module (LCM) skims sargassum seaweed off the surface of the water with nets that can be mounted on any boat. The device sits across the boat, with two large hoops holding the nets open, one on each side. As the boat travels forward, it cuts through the seaweed, which flows to the sides of the vessel and through the hoops into the nets. Effective at sweeping the seaweed from the water, the device can be employed by anyone with a boat, including local fishermen whose livelihoods have been disrupted by the seaweed’s damaging effect on tourism and the local economy.

The sargassum can then be towed out to sea, where Bisonó León’s and Gray’s second technology can come into play. By pumping the seaweed into very deep water, where it then sinks to the bottom of the ocean, the carbon in the seaweed can be sequestered. Other methods for disposing of the seaweed generally involve putting it into landfills, where it emits greenhouse gases such as methane and carbon dioxide as it breaks down. Although some seaweed can be put to other uses, including as fertilizer, sargassum has been found to contain hard-to-remove toxic substances such as arsenic and heavy metals.

Bisonó León says he comes from a long line of entrepreneurs who often expressed much commitment to social impact. His family has been involved in several different industries, his grandfather and great uncles having opened the first cigar factory in the Dominican Republic in 1903.

Gray says internships with startup companies and the undergraduate projects he did with Slocum developed his interest in entrepreneurship, and his involvement with the sargassum problem only reinforced that inclination. During his master’s program, he says he became “obsessed” with finding a solution.

“Professor Slocum let me think extremely big, and so it was almost inevitable that the distillation of our two years of work would continue in some form, and starting a company happened to be the right path. My master’s experience of taking an essentially untouched problem like sargassum and then one year later designing, building, and sending 15,000 pounds of custom equipment to test for three months on a Dominican Navy ship made me realize I had discovered a recipe I could repeat — and machine design had become my core competency,” Gray says.

During the initial research and development of their technologies, Bisonó León and Gray raised $258,000 from 20 different organizations. Between June and December 2021, they succeeded in removing 3.5 million pounds of sargassum and secured contracts with Grupo Puntacana, which operates several tourist resorts, and with other hotels such as Club Med in Punta Cana. The company subcontracts with the association of fishermen in Punta Cana, employing 15 fishermen who operate LCMs and training 35 others to join as the operation expands.

Their success so far demonstrates “'mens et manus' at work,” says Slocum, referring to MIT's motto, which is Latin for "mind and hand." “Geeks hear about a very real problem that affects very real people who have no other option for their livelihoods, and they respond by inventing a solution so elegant that it can be readily deployed by those most hurt by the problem to address the problem.