A river used to run through it: how New Mexico handles a dwindling Rio Grande 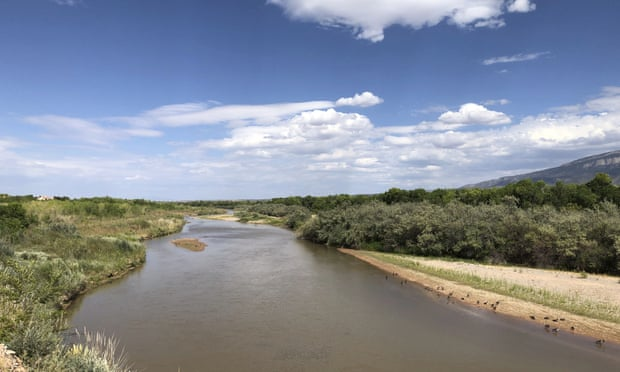 The Rio Grande used to flow freely, but now in Las Cruces, humans, fish and plants are vying for water in the arid landscape

The Rio Grande as it flows through Rio Rancho, New Mexico. In Las Cruces, when the growing season ends, nothing is left in the river bed.

The Rio Grande as it flows through Rio Rancho, New Mexico. In Las Cruces, when the growing season ends, nothing is left in the river bed. Photograph: Susan Montoya Bryan/AP

Imagine the world without its most famous rivers: Egypt without the Nile, or London without the Thames. In Las Cruces, New Mexico, residents don’t have to envision the American west without the Rio Grande – it runs dry in their city almost every single year.

But this isn’t its natural state.

Isaac Melendrez, who was born near Las Cruces in 1934 and contributed to an oral history of the Rio Grande, remembered swimming in the river with his family as a child, while throngs of birds soared overhead. During the rainy season, the river’s floodwaters sounded like trains. Now?

“It’s shrunk just about as much as it can,” Melendrez said. “I don’t know what else they can take from it.”

In the past, the Rio Grande would run through Las Cruces for the irrigation season from February to October. But last year, the river didn’t flow until March, and was dry by September. In 2021, the Elephant Butte Irrigation District (Ebid), in charge of measuring and releasing water to Las Cruces from upstream dams, estimated that water levels will be so low they won’t arrive until June and it will probably be gone again at the end of July.

A finite amount of water flows through the Rio Grande every year, so when there are shortages, every city along the river is affected. Due to climate change, hotter and drier seasons are reducing the snowpack that melts to feed the Rio Grande, and rising temperatures are increasing evaporation from the reservoirs. Because of this, the river has had just seven years with a “full supply” of water in the past 20, and only two in the past decade.

“With the lessened snowpack and the depletion of water resources across the south-west, we’re just stacking problems on top of other problems,” says Las Cruces city councilor Gabe Vasquez. “Every living thing that depends on having water in the desert suffers as a result.”

The Rio Grande’s flow was always variable, but drying up completely was an extraordinary event until the 1890s. When it began to dry up regularly, due to upstream agricultural development, Congress authorized a series of projects, spanning decades, to control where and when the water runs. For example, dams release carefully calculated amounts of water to irrigate the green belt of farms that stretch down it.

In Las Cruces, the Rio Grande’s flow is diverted and drained, flooding into pecan orchards and feeding crops like onions, corn and famously peppery green chiles, for which the state is known. Here, most of the water is owned by irrigators through a century-old system called “water rights”.

These were granted on a first come, first served basis to the farmers and ranchers who settled the state, and the oldest rights are prioritized when the Ebid allocates water every year. Despite making up about 2.4% of New Mexico’s GDP, the agriculture and processing industry receives three-quarters of the state’s surface and groundwater.

Which means in Las Cruces, when the growing season ends, nothing is left in the river bed.

“When the river is flowing during those summer months … our community comes out in droves to float the river, to fish the river, to enjoy picnics by the river, to birdwatch, to swim,” says Vasquez. “The type of quality of life that anyone living next to a body of water should have, we miss out on for the majority of the year because we don’t have that source of recreation.”

The Chihuahuan desert, where Las Cruces is located, is the most diverse desert in the western hemisphere, and humans aren’t the only ones vying for water in the arid landscape.

The river dries up, and if you go look in the irrigation ditches after that happens, you’ll see dead or dying fish

The Rio Grande used to provide water on a bell curve, with powerful floods in the spring and summer and lower and slower flows in the winter. Now the dams release about 20% of what naturally occurred in the river’s peak months, and species that spent millions of years adapting to the first cycle struggle to survive on this one.

Cottonwood trees evolved to release their seeds in time with spring floods that would wipe out existing vegetation and clear land for them to take root. Without this advantage, cottonwood populations have dwindled, and invasive species like salt cedar, which shed their seeds year-round, monopolize their habitat instead.

Pools of sitting water from the floods also attracted insects, which attracted the south-western willow flycatcher to nest and feed their young. Due to steady riparian habitat loss, they were classified as endangered in 1995.

“It’s all connected, right? It’s a web,” says Beth Bardwell, former director of conservation, Audubon New Mexico. “And here on the Rio Grande, we’ve basically begun to take out one web strand after another until it’s a really simplified system, and it can’t sustain a whole lot any more.”

Of the 27 native fish species originally found in this stretch of the Rio Grande, only 14 remain. Some manage to survive in irrigation drains when the river isn’t running, but most live in the reservoirs above Las Cruces, swimming down the river when the dams open up and dying when they’re shut off again.

SOURCE AND FULL ARTICLE THE GUARDIAN