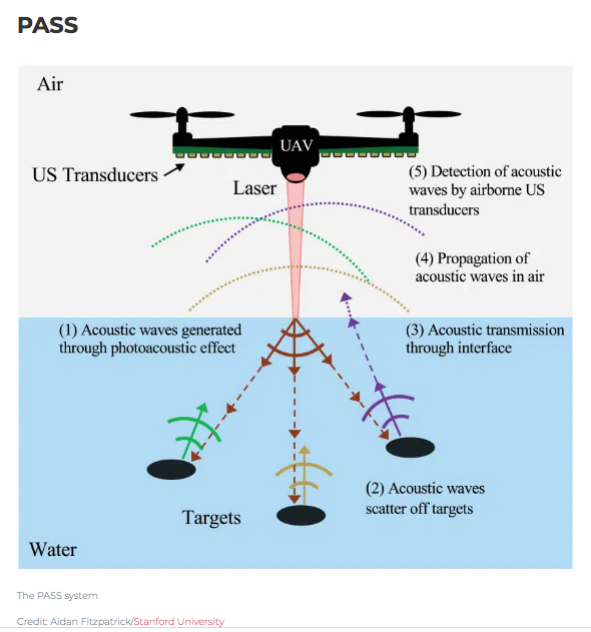 A great many areas of the ocean floor covering about 70% of the Earth remain unmapped. With current technology, it's an extremely arduous and time-consuming task, accomplished only by trawling unmapped areas with sonar equipment dangling from boats. Advanced imaging technologies that work so well on land are stymied by the relative impenetrability of water.

That may be about to change. Scientists at Stanford University have announced an innovative system that combines the strengths of light-based devices and those of sound-based devices to finally make mapping the entire sea floor possible from the sky.

The new system is detailed in a study published in IEEE Explore.

"Airborne and spaceborne radar and laser-based, or LIDAR, systems have been able to map Earth's landscapes for decades. Radar signals are even able to penetrate cloud coverage and canopy coverage. However, seawater is much too absorptive for imaging into the water," says lead study author electrical engineer Amin Arbabian of Stanford's School of Engineering in  Stanford News .

One of the most reliable ways to map a terrain is by using sonar, which deduces the features of a surface by analyzing sound waves that bounce off it. However, If one were to project sound waves from above into the sea, more than 99.9% of those sound waves would be lost as they passed into water. If they managed to reach the seabed and bounce upward out of the water, another 99.9% would be lost.

Electromagnetic devices — using light, microwaves, or radar signals — are also fairly useless for ocean-floor mapping from above. Says first author Aidan Fitzpatrick, "Light also loses some energy from reflection, but the bulk of the energy loss is due to absorption by the water." (Ever try to get phone service underwater? Not gonna happen.)

The solution presented in the study is the Photoacoustic Airborne Sonar System (PASS). Its core idea is the combining of sound and light to get the ob done. "If we can use light in the air, where light travels well, and sound in the water, where sound travels well, we can get the best of both worlds," says Fitzpatrick.

An imaging session beings with a laser fired down to the water from a craft above the area to be mapped. When it hits the ocean surface, it's absorbed and converted into fresh sound waves that travel down to the target. When these bounce back up to the surface and out into the air and back to PASS technicians, they do still suffer a loss. However, using light on the way in and sound only on the way out cuts that loss in half.

This means that the PASS transducers that ultimately retrieve the sound waves have plenty to work with. "We have developed a system," says Arbabian, "that is sensitive enough to compensate for a loss of this magnitude and still allow for signal detection and imaging." Form there, software assembles a 3D image of the submerged target from the acoustic signals.