Algorithm-guided irrigation approach could reduce irrigation water use by 24% 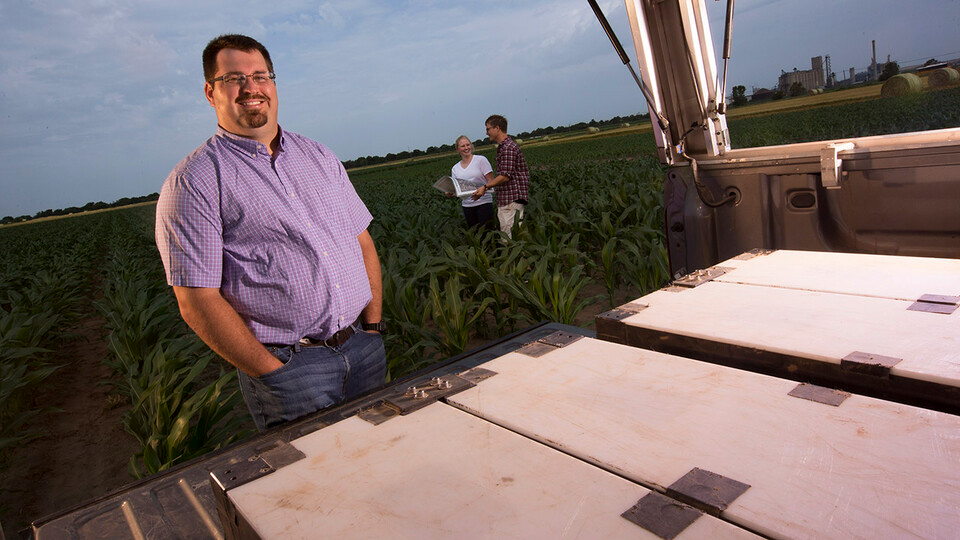 A research paper by Trenton Franz, associate professor of hydrogeophysics at Nebraska, and co-authors points to an innovative irrigation approach that could decrease water use while increasing producer profitability.
Craig Chandler | University Communication 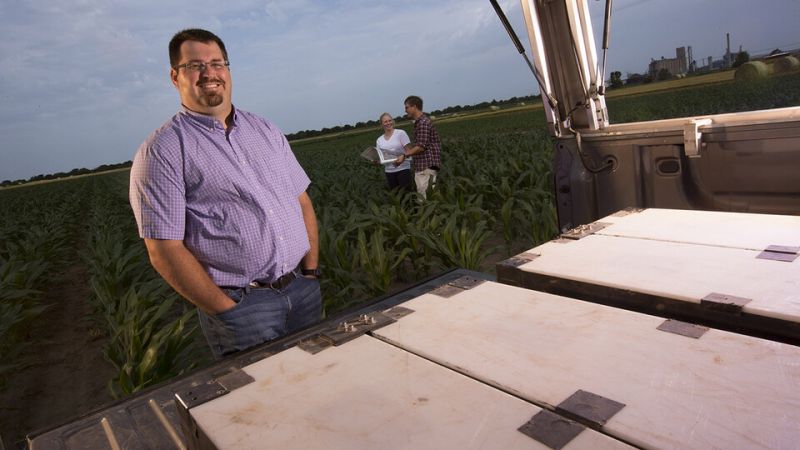 Agriculture’s future in Nebraska and globally will depend in great part on efficient water use. A research paper by University of Nebraska–Lincoln scientists points to an innovative irrigation approach that offers promise to decrease water use while increasing producer profitability.

Traditionally, the level of needed irrigation has generally been determined by gauging water availability in the soil. An irrigation-scheduling algorithm developed through testing at 12 locations across Nebraska includes an additional factor — the level of water concentration in the atmosphere.

That approach “takes both the water supply and demand into consideration, and that’s where we’re hoping to gain some efficiency by looking at both simultaneously,” said Trenton Franz, associate professor of hydrogeophysics at Nebraska. “That’s fairly complicated, so this algorithm does a fairly nice job of trying to basically optimize the processes, as well as making it more automatic.”

In an article in the journal Nature Communications , Franz and co-authors found that the algorithm-guided irrigation approach could reduce irrigation water use by 24% while maintaining crop yields and increasing profits by 11.2% and water productivity by 25.2%. As a result, the article said, this new methodology “could significantly improve water sustainability.”

The article’s co-authors also include Daran Rudnick, associate professor and irrigation management specialist in the Department of Biological Systems Engineering, and Andrew Suyker, research professor of micrometeorology in the School of Natural Resources.

If follow-up testing currently underway confirms the algorithm’s practical use, the technology could drive improved water efficiency among the large majority of agricultural producers who don’t use soil moisture sensors, said Franz, associate director for research in the School of Natural Resources. About 10% to 15% of producers use moisture probes.

“It’s that missing 85% of people who aren’t too interested in using soil moisture probes who really make a big difference,” Franz said. “So maybe instead of saving 4 inches of water using good probe management, maybe this algorithm could save 1 to 3 inches, but over a much wider range of people who are willing to have a lower investment in that. It’s very time-consuming to manage these soil moisture probes, so I know that’s one barrier to adoption.”

The best approach would be a “semi-autonomous” use of the algorithm, to maintain a degree of control by producers, Franz said.

Researchers tested the algorithm at 12 locations across Nebraska, using data from Nebraska’s Eastern Nebraska Research, Extension and Education Center near Mead to calibrate the model tested at the other sites.

In a follow-up to the initial study, Rudnick, working out of the West Central Research and Extension Center near North Platte, is overseeing current tests of the algorithm by scientific teams from the university, state agencies and producer groups. Husker students will participate through the Testing Ag Performance Solutions program, in which student teams compete in field tests to maximize positive results in terms of irrigation water use, profitability and water productivity. The follow-up testing is now in its second year.

This testing, Franz said, “will include head-to-head comparisons against other scheduling methods — business-as-usual, producer groups, rainfed, etcetera — to see how the algorithm performs in a blind test. This is critical to further show the utility of the method.” Water issues have long been a part of life for Franz, a Colorado native.

“Growing up on the Front Range, water was always a concern,” he said.

He has extended family in the eastern Colorado farming community, and his grandfather and an uncle both worked for that state’s Division of Water Resources.