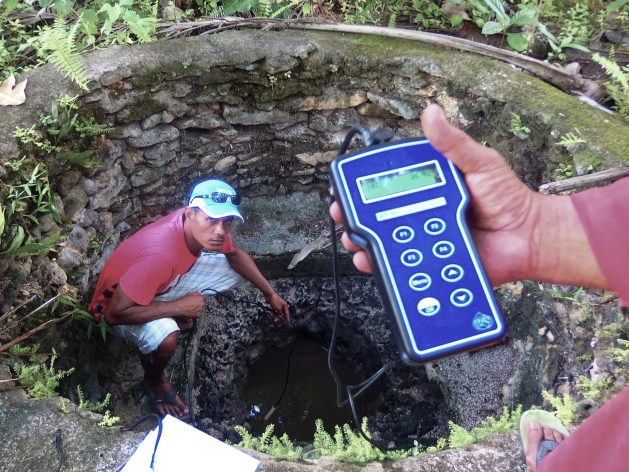 Rural communities on one of the nine islands that make up the Polynesian nation of Tuvalu are anticipating how life will change when they are connected to piped clean water for the first time.

Technical experts measure the salinity of groundwater wells on Vaitupu Island, Tuvalu. This month work will begin on building the network of tanks and pipes which will eventually convey clean water from the north of Vaitupu Island to the 1,500 people who live in the villages of Tumaseu and Asau in the south. Courtesy: Pacific Community

Despite being surrounded by millions of square kilometres of ocean, just over half of the 12 million people who live in the Pacific Islands region have access to clean water, the lowest of any region in the world. In remote island communities in Tuvalu, and across the region, the deficit of clean water is a major obstacle to disease prevention, lifelong health and development progress.

Pisi Seleganiu, whose family live in villages on Vaitupu Island, which is located about 120 kilometres northwest of Tuvalu’s main Funafuti Atoll, told IPS: “It very much affects their daily lives. The only source is rainwater; the issue is when it becomes dry there is no supplementary water supply. People use a lot of fuel to drive to the far end of the island to get water and bring it back to the villages.”

This month work will begin on building the network of tanks and pipes which will eventually convey groundwater from wells in the north of Vaitupu Island to the 1,500 people who live in the villages of Tumaseu and Asau in the south. It’s the culmination of years of consultation between the island’s customary leaders and the regional development organisation, Pacific Community, which is headquartered in New Caledonia, about traditional knowledge of water resources.

Located in the Central Pacific Ocean between Kiribati to the northeast and Fiji to the south, Tuvalu’s estimated population of 10,580 people reside on low lying islands; the highest elevation is 4.6 metres. Surface sources of freshwater are very scarce. There are no rivers, for instance, and islanders are overwhelmingly reliant on capturing rainwater for drinking, cooking and hygiene.

“Tuvalu is blessed to have plenty of rain annually…rainwater harvesting with adequate storage is the only sustainable means to maintain supply for the population,” Uatea Salesa, project manager at the Pacific Community for the Vaitupu Water Security Project, told IPS. But he added that, during times of drought, even the rainwater wasn’t enough.

The atoll nation is highly vulnerable to the El Niño Southern Oscillation (ENSO) climate phenomenon, an alternating pattern of changes in the water temperature of the tropical Pacific Ocean, known as El Niño and La Niña, that, in turn, drive warm and cool atmospheric changes and fluctuating periods of rainfall. In 2011 Tuvalu experienced a severe drought, attributed to La Niña, following months without rain, which led to the government announcing a state of emergency and supplies of freshwater being airlifted into the country by international donors.

Population growth has also increased pressures on the country’s water resources. Tuvalu has a total land area of only 26 square kilometres and a population density of 408 people per square kilometre, resulting in a huge demand for consumption of a fragile natural resource.

Boosting the country’s water security is a major priority for the Tuvalu government and, to this end, desalination has been explored.

“Desalination was installed to supplement the water supply by the government on Funafuti Island [where the capital is located] and on some of the northern islands as a backup during periods of low rainfall and during drought,” Salesa said. “But desalination is an expensive technology and will not be sustainable if it becomes an alternative source of water supply.” Soseala Tinilau, the Tuvalu government’s director of the Department of Environment, told IPS that the challenges of managing and supplying water also included the low capacity of households to store clean water and continually maintain guttering and water tanks.

The importance of clean water for life and human, as well as national development, was stressed by Dr Stuart Minchin, director general of the Pacific Community, on World Water Day, Mar. 22, this year.

“Lack of access to safe drinking water and sanitation poses a serious health risk, particularly to children, and a fundamental development constraint for Pacific nations….While access to potable water and sanitation is a basic human right that many of us take for granted, it is a right currently denied to over two thirds of Pacific Islanders, especially those in rural areas, informal communities on the fringes of the region’s growing urban areas and on the hundreds of small islands scattered across the Pacific,” Minchin stated.

Clean freshwater is an essential agent, at the moment, in the battle against COVID-19, but also in reducing the prevalence of waterborne diseases in the Pacific Islands, such as diarrhoea and cholera, which are fatal illnesses for young children. And, in an island state, such as Tuvalu, which is increasingly linked to the fortunes of climate change, it’s an imperative for continued human habitation.

“Water is an issue of survival for people in Tuvalu, water is life,” Tinilau told IPS.

And in the Pacific, it’s an issue of greater magnitude in rural communities, where only 44 percent of people have access to water, compared to 92 percent in towns and cities. In Tumaseu and Asau on Vaitupu Island, villagers whose livelihoods are mostly associated with fishing, have access to health clinics and sanitation, but life is challenging without a consistently reliable source of water in the communities.

This is now set to change after technical experts from the Pacific Community drew on the traditional knowledge held by village elders of where sources of well water were located and carried out scientific investigations in 2014. It resulted in the groundwater potential on Vaitupu Island being mapped and quantified for the first time.

“We checked out where they said the location would be, the possible sites. We used technology where we passed electrical signals down to the ground and then we knew exactly where the water was, the level of the water….it was great to see the science behind the assessment actually proving the local knowledge,” Salesa told IPS.

As the elders had said, the most expansive groundwater lens was in the far north of the island, near the coast. The island council then led successful applications to secure funding from the New Zealand Government’s Ministry of Foreign Affairs and Trade for the construction of overhead tanks at the well site and pipes to convey water direct to the villages. Clean water is expected to be on tap in Tumaseu and Asau by June 2022.

“It will be so beneficial to implement this project. It will help to improve the status of living of people in both communities. It will make a big difference to health issues,” Seleganiu said, adding that villagers will also have more time to devote to income earning and community development activities, without the time-consuming labour of transporting supplies of water by road.