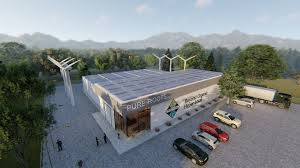 Foundation Farms Corp. To Shake Up Vertical Farming Industry By Implementing Cavitation Technology Into Its Vertical Farms With Its E-ROOTS Process.

Foundation Farms, Corp., ("Foundation Farms") a subsidiary of GME Innotainment, Inc. ("GMEV") today announced that it has developed its own proprietary process that it is calling its E-ROOTS process which will be incorporated into each vertical farm that is built, owned and operated by the company. This process incorporates patented hydrodynamic and ultrasonic cavitation equipment as the core technology along with air injection to enhance crop production through natural root stimulation techniques.

Cavitation is a natural phenomenon which has numerous examples in nature, the largest of which is the role it plays in the cleanup and health of the world's rivers and oceans. Waterfalls and rapids in fast-moving rivers and crashing waves in oceans and lakes create numerous cavitation events providing re-aeration and cleansing of the water.

Cavitation involves the formation of thousands and even millions of water vapor micro-bubbles in the moving fluid followed by their sudden pressure-induced collapse. The resulting phenomenon is the instantaneous release of tremendous quantities of thermal and mechanical energy. In the technology world, most people are quite familiar with the negative results of unwanted cavitation—the erosion of water pump impellers and boat propellors. Despite many attempts over the years by engineers and scientists to develop technology to harness the positive potential of cavitation, it is only recently that certain individuals and groups have succeeded in developing mechanical equipment that generates controlled cavitation without destroying itself in the process. This new and proven technology is what Foundation Farms will utilize in its process.

From a technology perspective, the E-ROOTS process is relatively simple to install and operate, has a low operating cost and comes with significant benefits:

Ed Kroeker, CEO of Foundation Farms stated, "My life interests, professionally, have revolved around agriculture, food and water. For the past 40 years I have designed numerous water treatment facilities around the world. During the last six years I had the unique privilege of assisting in the commercialization of a recently patented cavitation system. I am excited to be able to bring this knowledge and experience into our vertical farming ventures. I am convinced that the impact of E-ROOTS technology on the profitability of the vertical farming industry will closely parallel the impact of LED lighting technology. LED lighting is focused on optimizing energy transmission to the plant tops and E-ROOTS optimizes energy transmission to the roots."

Yves R. Michel, GMEV CEO commented: "Foundation Farms is establishing new horizons within the rapidly growing vertical farming industry. We are excited about the further developments made by the Company."