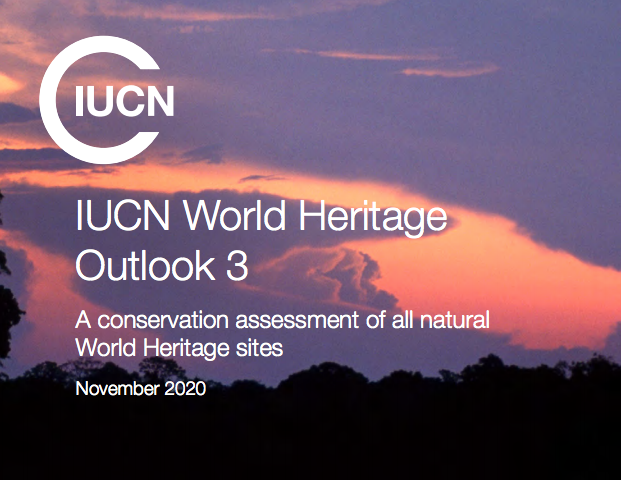 Gland, Switzerland, 2 December 2020 (IUCN)  – Climate change is now the biggest threat to natural World Heritage, according to a report published today by IUCN (International Union for Conservation of Nature). A third (33%) of natural World Heritage sites are threatened by climate change, including the world’s largest coral reef, the Great Barrier Reef, assessed as having a “critical” outlook for the first time.

“ Natural World Heritage sites are amongst the world’s most precious places, and we owe it to future generations to protect them ,” said  Bruno Oberle, IUCN Director General . “ The IUCN World Heritage Outlook 3 reveals the damage climate change is wreaking on natural World Heritage, from shrinking glaciers to coral bleaching to increasingly frequent and severe fires and droughts. As the international community defines new objectives to conserve biodiversity, this report signals the urgency with which we must tackle environmental challenges together at the planetary scale.”

Among the   83 natural World Heritage sites now threatened by climate change is the Great Barrier Reef, where ocean warming, acidification and extreme weather have contributed to dramatic coral decline, and as a result decreasing populations of marine species. In the Cape Floral Region Protected Areas of South Africa, climate change has exacerbated the spread of invasive species, while the Pantanal Conservation Area of Brazil was badly damaged by the unprecedented 2019-2020 wildfires. In Kluane Lake, located in a World Heritage site in Canada and the USA, the rapidly melting Kaskawulsh Glacier has changed the river flow, depleting fish populations.

The IUCN Outlook assesses the prospects for World Heritage site values – the unique features which have earned them their World Heritage status – based on threats, and how good protection and management is. It assesses 63% of sites as either “good” or “good with some concerns”, while 30% are of “significant concern” and 7% are “critical”. Half of the sites are found to have “effective” or “highly effective” protection and management, with the sustainability of the sites’ funding being the most common issue rated as a “serious concern”. The  Outlook  finds that 16 natural World Heritage sites have deteriorated since 2017, while only eight have improved.

The report also finds early evidence of the effects of the turmoil caused by the COVID-19 pandemic. While lower tourist numbers may ease pressure on some ecosystems, in more cases impacts appear negative. Closing sites to tourism causes significant revenue loss, and illegal activities are on the rise with fewer staff deployed to prevent them.

The year 2020 should be remembered as a tipping point in the history of humankind. A time when our ability to act collectively in the face of uncertainty has been tested to its limits and when, confronted with tragedy, we transformed our lives to protect each other, often at great cost. In the midst of the COVID-19 pandemic, we must look to a brighter future, a future where we stand together and work as one for the common good. This testing time comes as the international community determines a new course of action to preserve the diversity of life on Earth through the Post-2020 Global Biodiversity Framework.

Led by the UN’s Convention on Biological Diversity, we are taking stock of progress towards the Aichi Targets set in 2010, and agreeing new targets and indicators for the next decade and beyond. The World Heritage Convention, created in 1972 and with 194 signatories, can shape this process. The Convention embodies our ambition to pass the planet’s most precious places undamaged from one generation to the next.

Understanding our ability to honour these commitments will surely be the ultimate test for our vision of “Living in Harmony with Nature” by 2050. The IUCN World Heritage Outlook assesses the conservation prospects of all natural World Heritage sites: designated as such because they harbour irreplaceable ecosystems and provide habitats critical to the survival of globally threatened species. Examining the successes and challenges of preserving these places is an indicator of what is happening to biodiversity more broadly.

IUCN’s assessment shows whether current conservation measures are sufficient, if more must be done, and where. The conclusions of IUCN World Heritage Outlook 3 are somewhat sobering. Climate change is now the most prevalent threat to natural World Heritage sites and the harm caused to these sites by the pandemic’s disruption is becoming clear.

Since the previous assessment in 2017, more sites have deteriorated than have improved and, whilst we should celebrate the successes, the threats sites face are escalating. There is much work to be done to secure the conservation in perpetuity of them all.

The great wealth of information brought together for IUCN World Heritage Outlook 3, and the expertise needed to interpret it, are testimony to IUCN’s unique ability to mobilise its Members, partners and Commission experts. The report is the work of hundreds, including many from IUCN’s World Commission on Protected Areas and Species Survival Commission.

The sites they have assessed are celebrated as places so valuable that they transcend national boundaries, cultures and generations. In these uncertain times, we hope everyone can look to these aweinspiring places as proof of our collective commitment to conserving life on Earth.