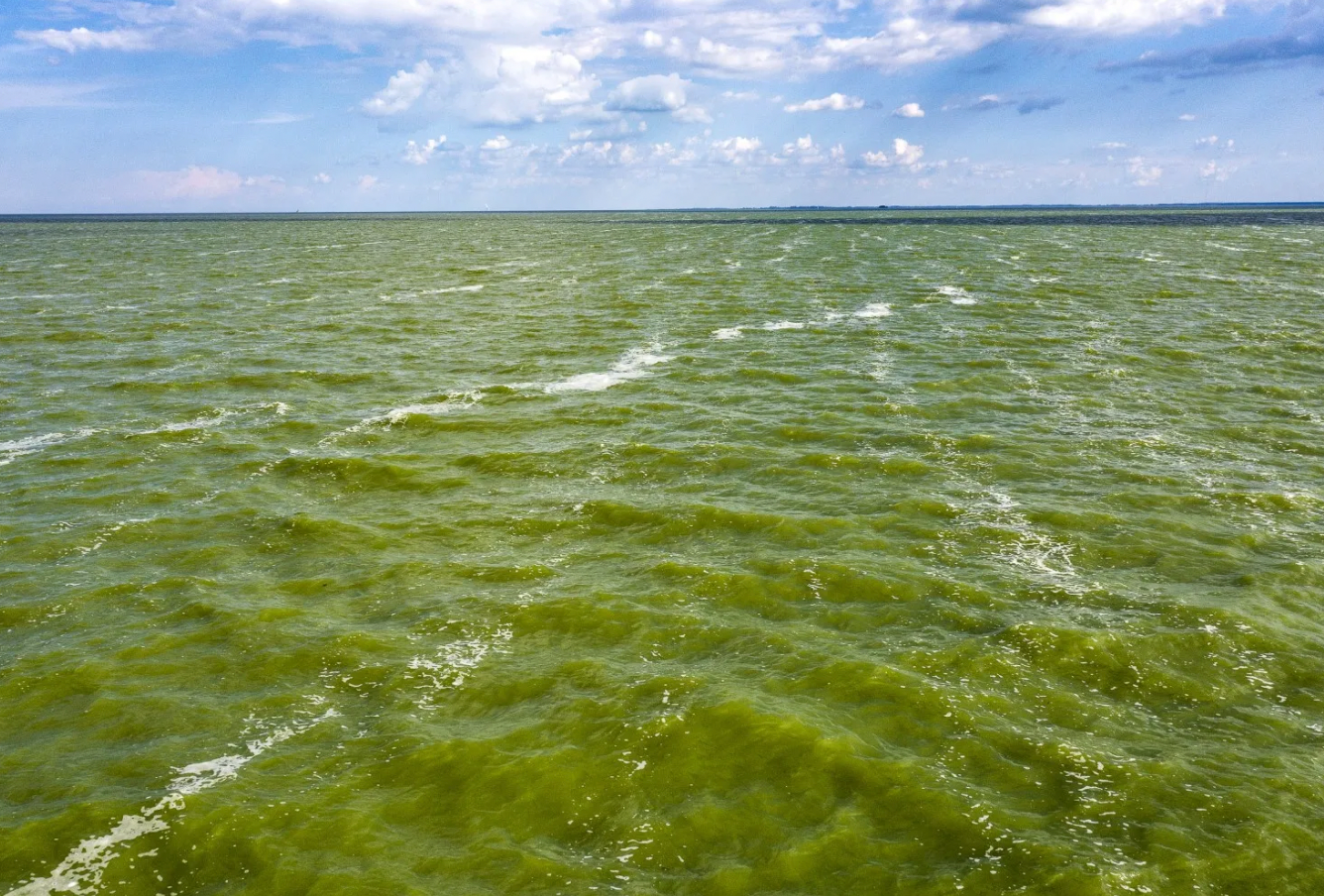 By Keith Schneider, Circle of Blue

The Great Lakes News Collaborative includes Bridge Michigan; Circle of Blue; Great Lakes Now at Detroit Public Television; and Michigan Radio, Michigan’s NPR News Leader; who work together to bring audiences news and information about the impact of climate change, pollution, and aging infrastructure on the Great Lakes and drinking water. This independent journalism is supported by the Charles Stewart Mott Foundation.

First of a six-part series 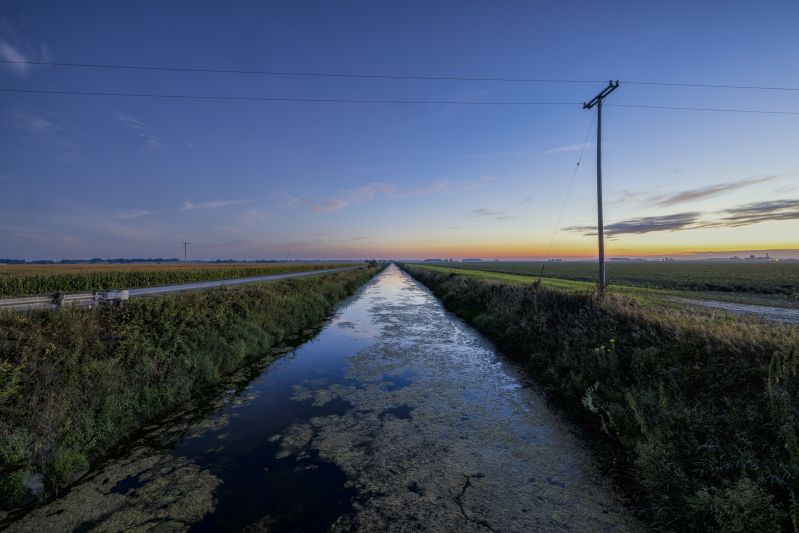 TOLEDO — Just as Great Lakes scientists anticipated, the first blue-green swirls of a mammoth toxic algae bloom surfaced in mid-July in the nearshore waters of Lake Erie, between Monroe, Michigan, and this Ohio port city of 275,000. Viewed from above, the sweeping curls painted an absurd, even mesmerizing portrait of harm on the surface of the shallowest and warmest of the five big lakes.

There is nothing attractive, though, about Lake Erie’s annual algal bloom, or the harmful blooms that now contaminate so many of America’s iconic waters, among them the Chesapeake Bay, Lake Okeechobee, Lake Champlain, and California’s Clear Lake. Harmful algal blooms are the biological consequence of a riptide of bloom-generating nutrients allowed by law and timid regulation to run off the land, particularly farm fields. These nutrients are the source of some of the nation’s worst water pollution.

Those land-applied nutrients, especially phosphorus, largely evaded regulation in the last half-century of increasingly stringent environmental policing, despite the rising number of harmful blooms and their risk to human and animal health and recreational economies. Powerful resistance to oversight from the $1.1 trillion-a-year U.S. farm sector and surprising public tolerance have made toxic blooms a hazardous summertime mainstay of shoreline communities and lakeside residents.

Harmful algal blooms now rank with climate change as a systemic ecological threat and a severe public policy challenge. Just how much of a threat was illustrated eight years ago when a toxic bloom shut down Toledo’s drinking water supply for 500,000 people over three days. The same threat from annual toxic blooms exists for 900,000 people who rely on Michigan’s Saginaw Bay for drinking water.

Just as with climate change, local, state, provincial, and national governments in Canada and the United States have collaborated with science agencies, universities, and non-profit groups to develop effective responses, especially for Lake Erie. More than $400 million has been spent by the federal government to support water quality monitoring networks and cutting-edge science about the sources of contamination and their effects. Collaboration between governments has generated formal state, federal, and bi-national commitments to reduce nutrient discharges, and thorough action plans to achieve them.

What have all the spending and committee meetings wrought? After five months of investigation, and in interviews with more than 40 farmers, state regulators, advocates, and scientists in five states and Washington, D.C., Circle of Blue found that, with a few exceptions, much of it isn’t working. 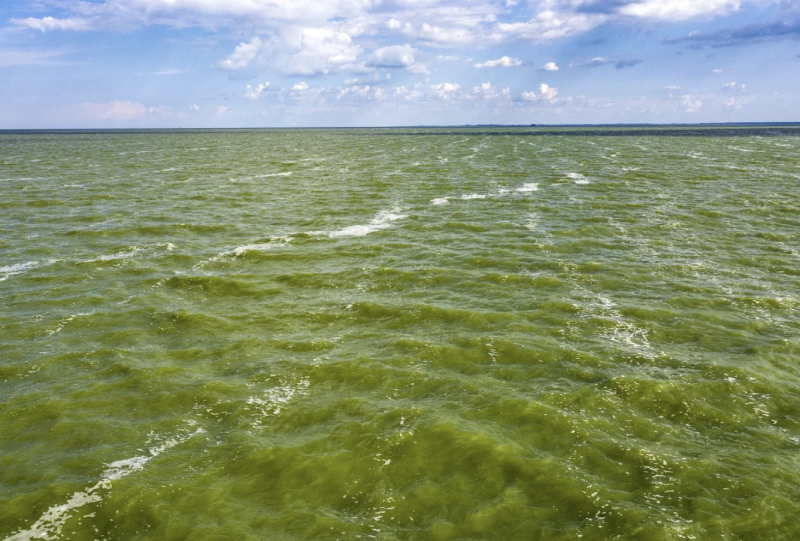 According to assessments by five federal agencies and every state in the Great Lakes basin, Lake Erie is among the country’s most visible examples of waters fouled by toxic blooms. Photo © J. Carl Ganter/ Circle of Blue

Harmful Algal Bloom Project Findings
This is the first of a six-part series, “Danger Looms Where Toxic Algae Blooms,” Circle of Blue’s penetrating assessment of the causes, impediments, and solutions to harmful algal blooms that are more numerous and in many cases getting more dangerous in Michigan, Ohio, and the other Great Lakes states. Funded by the Erb Family Foundation and the Joyce Foundation, the project comes on the 50th anniversary of the Great Lakes Water Quality Agreement, a high point of environmental diplomacy, and the U.S. Clean Water Act, a pivotal piece of American environmental law. Together they were established to clear Lake Erie and other waterways of harmful algal blooms. For the first 20 years after enactment, working in tandem, the Water Quality Agreement and the Clean Water Act did just that. Lake Erie, which was famously declared ecologically dead in the 1960s, recovered.

It’s sick again. According to assessments by five federal agencies and every state in the Great Lakes basin, Lake Erie is among the country’s most visible examples of waters fouled by toxic blooms. There are many others. In 2009, the U.S. Environmental Protection Agency surveyed more than 49,000 lakes across the country and found that 30 percent contained toxins produced by the blooms. Last year, the Environmental Working Group, a Washington-based research organization, counted 476 harmful blooms in 41 states, five times higher than in 2010.