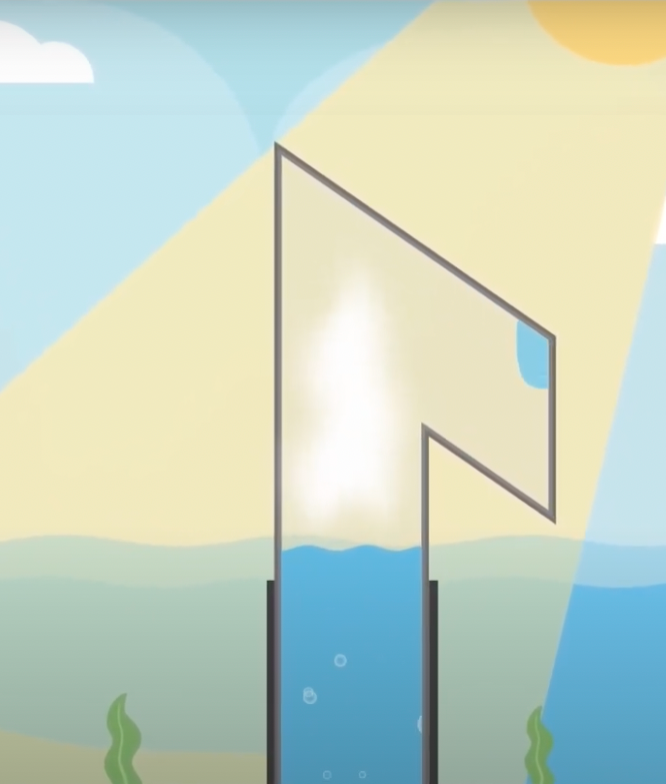 A deep tech solution to water scarcity in the UAE
The Emirati-founded deep tech startup has invented a solar water distillation technology that can produce usable water by trapping the lost evaporated water from the ocean. The startup’s solution involves placing a large greenhouse construct on the seashore, then relying on solar rays to heat the water so it evaporates (as shown above). After that, the ascending water vapor condenses when it touches the cooler side of the construct, being collected and stored as distilled water, with no waste, brine or emissions.

This is incredible especially when you realize that the water evaporating from the Arabian Gulf is at least 84 cubic miles (350 cubic kilometers) per year, approximately ten times higher than the total desalinated water produced annually in the region, according to Manhat.

“Our technology is patented, and its novelty is its ability to produce water from open water surfaces (such as seas, rivers and lakes)," Dr. Alhassan says. "There is other technology that has been on the market for decades, but it has limitations including being based on land and producing brine. Since our technology is on open water surfaces, we only capture water vapor which doesn’t contain any salt, so we don't have to deal with brine which is harmful to aquatic life." 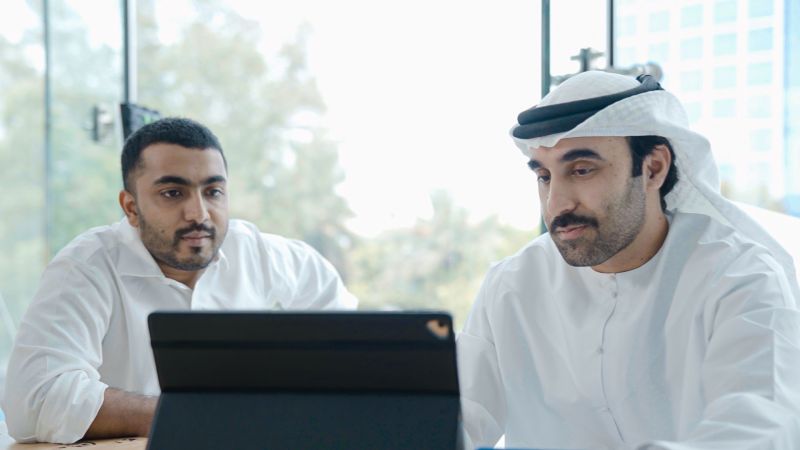 Dr. Saeed Alhassan (R), the founder of Manhat
Manhat has tested various prototypes of its technology both anchored and floating. Both have been deployed around Abu Dhabi in collaboration with Abu Dhabi Ports and the developer group Alreem Island. Anchored devices have been installed into the concrete walls of the corniche [Abu Dhabi’s waterfront], whereas floating devices have been deployed on water surfaces. “We have been able to showcase the water production process without using any electricity, hence, zero carbon dioxide emissions.”

“Once you can produce water sustainably, it opens the door for solving both water scarcity and food security, because availability of water is a prerequisite to agricultural activities on a large scale," Dr. Alhassan continues. "Our technology mimics the natural water cycle with zero carbon footprint or brine rejection. The water can be immediately used to irrigate crops which will benefit coastal countries and mitigate the looming threat of rising sea levels due to climate change."

Tackling the issue of food security, the Abu Dhabi government’s economic accelerator program, Ghadan 21, is focused on agriculture technology. Once fully deployed, the ag tech financial package is forecast to contribute $449.3 million to GDP, create 2,900 new jobs and contribute to the emirate's goal of increasing domestic food production by 40 percent.

“We are the only water technology that can be integrated to provide floating farm solutions," Dr. Alhassan says. "There are very few floating farms around the world and they all depend on grid water, either groundwater or water from desalination plants, which negatively impacts the environment.”

Currently in seed stage, Manhat is working towards funding its groundbreaking deep tech pilot. “Our next goal is to launch a pilot floating farm to grow mushrooms and generate revenue," he concludes. "We expect the pilot project to be constructed and evaluated over 12 to 18 months. After this evaluation period, we will expand our technology to cover other crops including wheat and rice. In five years, we would have technology to grow different crops of high commercial value. If we are successful, we will expand our technology globally."