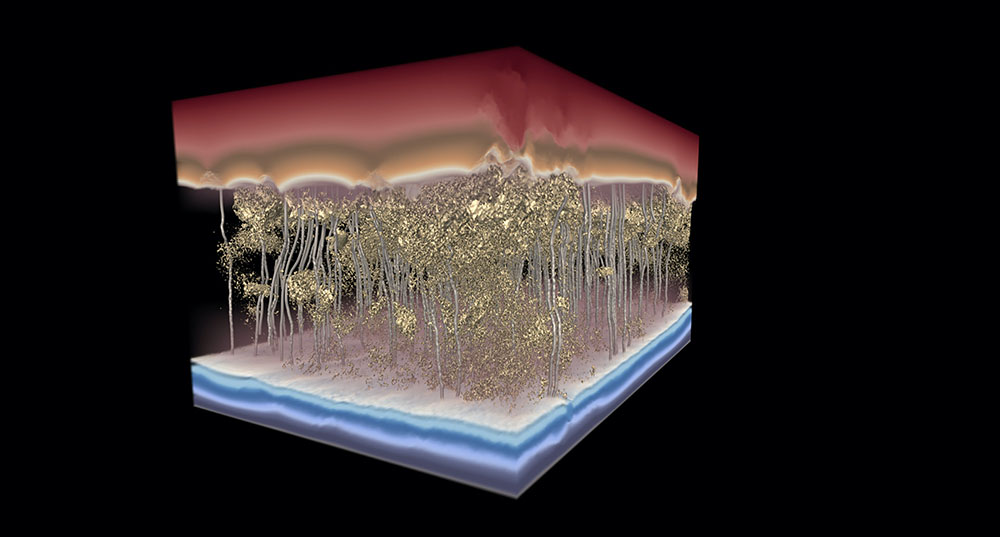 Biological membranes let the right stuff into cells while keeping the wrong stuff out. And, as researchers noted in a paper just published by the journal  Science , they are remarkable and ideal for their job.

But they're not necessarily ideal for high-volume, industrial jobs such as pushing saltwater through a membrane to remove salt and make fresh water for drinking, irrigating crops, watering livestock or creating energy.

The researchers found that creating a uniform membrane density down to the nanoscale of billionths of a meter is crucial for maximizing the performance of reverse-osmosis, water-filtration membranes. Their discovery has just been published online by the journal  Science  and was the cover paper of the Jan. 1 print edition. Reprinted with permission from AAAS.

"The simulations were able to tease out that membranes that are more uniform – that have no ‘hot spots' – have uniform flow and better performance," Ganapathysubramanian said. "The secret ingredient is less inhomogeneity."

The  Science  cover image was created by Greg Foss, a visualization expert and artist at TACC, in collaboration with the Iowa State researchers. Foss also contributed to the manuscript illustrations.

In the cover image (above and right), red above the membrane shows water under higher pressure and with higher concentrations of salt; the gold, granular, sponge-like structure in the middle shows denser and less-dense areas within the salt-stopping membrane; silver channels show how water flows through; and the blue at the bottom shows water under lower pressure and with lower concentrations of salt.

"You can see huge amounts of variation in the flow characteristics within the 3D membranes," Khara said.

Most telling are the silver lines showing water moving around dense spots in the membrane.

"We're showing how water concentration changes across the membrane." Ganapathysubramanian said of the models which required high-performance computing to solve. "This is beautiful. It has not been done before because such detailed 3D measurements were unavailable, and also because such simulations are non-trivial to perform."

Khara added, "The simulations themselves posed computional challenges, as the diffusivity within an inhomogeneous membrane can differ by six orders of magnitude"

So, the paper concludes, the key to better desalination membranes is figuring out how to measure and control at very small scales the densities of manufactured membranes. Manufacturing engineers and materials scientists need to make the density uniform throughout the membrane, thus promoting water flow without sacrificing salt removal.

It's one more example of the computational work from Ganapathysubramanian's lab helping to solve a very fundamental yet practical problem.

"These simulations provided a lot of information for figuring out the key to making desalination membranes much more effective," said Ganapathysubramanian, whose work on the project was partly supported by two grants from the National Science Foundation.