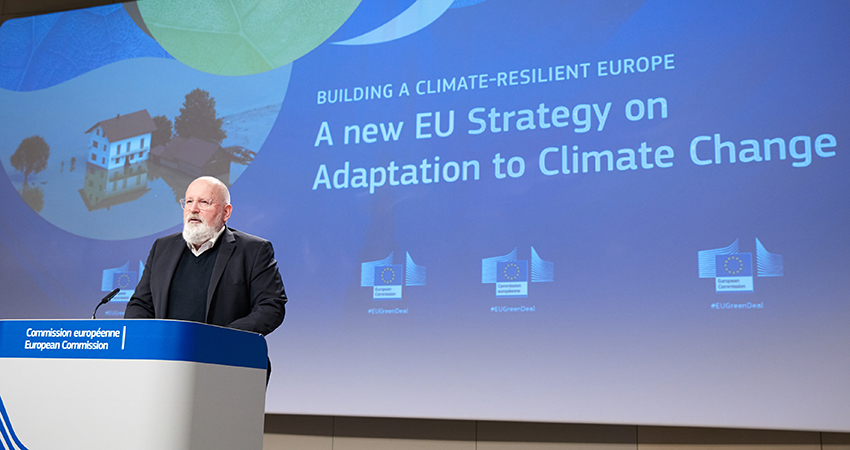 The European Commission (EC) presented a new EU Strategy on Adaptation to Climate Change as part of the Green Deal on the 24th of February. The European Commission is calling for faster and smarter measures to deal with the effects of more extreme weather caused by climate change. More cooperation with countries and partners outside the EU is also needed.

“The COVID-19 pandemic has been a stark reminder that insufficient preparation can have dire consequences. There is no vaccine against the climate crisis, but we can still fight it and prepare for its unavoidable effects. The impacts of climate change are already felt both inside and outside the European Union. The new climate adaptation strategy equips us to speed up and deepen preparations. If we get ready today, we can still build a climate-resilient tomorrow”, said vice-president Frans Timmermans during the presentation of the new strategy. Water is a key topic in the climate adaptation approach. Last year the UN concluded in a report water plays a crucial role on climate change.

According to the new strategy economic losses from more frequent climate-related extreme weather are increasing. ‘In the EU, these losses alone already average over 12 billion euros per year. Conservative estimates show that exposing today’s EU economy to global warming of 3°C above pre-industrial levels would result in an annual loss of at least 170 billion euros. Climate change affects also the health and well-being of Europeans, who increasingly suffer from heat waves.’

The European Commission wants to accelerate action and help to strengthen climate resilience globally. Adaptation actions must be based on robust data and risk assessment tools for all European citizens. To achieve this, the strategy proposes actions that push the frontiers of knowledge on adaptation so that we can gather more and better data on climate-related risks and losses, making them available to all. Climate-ADAPT, the European platform for adaptation knowledge, will be enhanced and expanded, and a dedicated health observatory will be added to better track, analyse and prevent health impacts of climate change.