Fertilizer Runoff In Streams And Rivers Can Have Cascading Effects, Analysis Shows 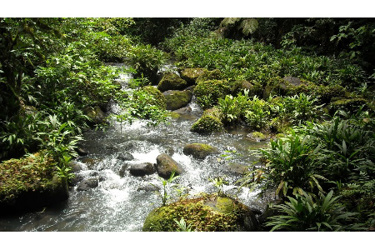 Fertilizer pollution can have significant ripple effects in the food webs of streams and rivers, according to a new analysis of global data. The researchers also found some detection methods could miss pollution in certain types of streams.

“Overall, we found that high levels of nutrients affect streams and rivers everywhere,” said the study’s lead author Marcelo Ardón, associate professor of forestry and environmental resources at North Carolina State University. “Wherever we looked, we saw increases in the abundance and biomass of organisms that live in streams, and also the speeding up of processes that happen in streams – how fast algae grow, how fast leaves decompose, and how fast organisms grow that feed on them.”

“We saw an average 48 percent increase overall in biomass abundance and activity in all levels of the food web,” Ardón said. “We also found that the food webs responded most strongly when both nitrogen and phosphorus were added together.”

While experts already use the presence of a specific type of chlorophyll – chlorophyll a – in water to detect algae growth, researchers said using that method could miss pollution in waterways where algae do not grow, and where decomposition of leaves or other plant matter is the primary source of food for other organisms.

“The food webs in those streams don’t depend on algae – the trees shade out the algae,” Ardón said. “The streams there depend on leaves that fall in and decompose, which is what the insects, such as caddisflies and stoneflies, are eating. In those detrital-based streams, we found similar responses to increases in nitrogen and phosphorus as has been found in algae.”

Another finding was that factors such as light, temperature, and baseline concentrations of nitrogen and phosphorus impacted the response to increases in the two nutrients.

“All of those things will determine how much of a response you get to increased nitrogen and phosphorus,” said study co-author Ryan Utz of Chatham University.

The findings have implications for environmental policy, Ardón said.

“The EPA has been asking states to come up with ways to reduce runoff of nitrogen and phosphorus into streams, because we know they can cause these really big problems,” said Ardón. “We know that at a big scale, and we don’t really know the details. A lot of states that are coming up with criteria to reduce the amount of nutrients in the water focus only on algal responses. Our study suggests regulators should expand their view.”

Anthropogenic increases in nitrogen (N) and phosphorus (P) concentrations can strongly influence the structure and function of ecosystems. Even though lotic ecosystems receive cumulative inputs of nutrients applied to and deposited on land, no comprehensive assessment has quantified nutrient-enrichment effects within streams and rivers. We conducted a meta-analysis of published studies that experimentally increased concentrations of N and/or P in streams and rivers to examine how enrichment alters ecosystem structure (state: primary producer and consumer biomass and abundance) and function (rate: primary production, leaf breakdown rates, metabolism) at multiple trophic levels (primary producer, microbial heterotroph, primary and secondary consumers, and integrated ecosystem). Our synthesis included 184 studies, 885 experiments, and 3497 biotic responses to nutrient enrichment. We documented widespread increases in organismal biomass and abundance (mean response = +48%) and rates of ecosystem processes (+54%) to enrichment across multiple trophic levels, with no large differences in responses among trophic levels or between autotrophic or heterotrophic food-web pathways. Responses to nutrient enrichment varied with the nutrient added (N, P, or both) depending on rate versus state variable and experiment type, and were greater in flume and whole-stream experiments than in experiments using nutrient-diffusing substrata. Generally, nutrient-enrichment effects also increased with water temperature and light, and decreased under elevated ambient concentrations of inorganic N and/or P. Overall, increased concentrations of N and/or P altered multiple food-web pathways and trophic levels in lotic ecosystems. Our results indicate that preservation or restoration of biodiversity and ecosystem functions of streams and rivers requires management of nutrient inputs and consideration of multiple trophic pathways.