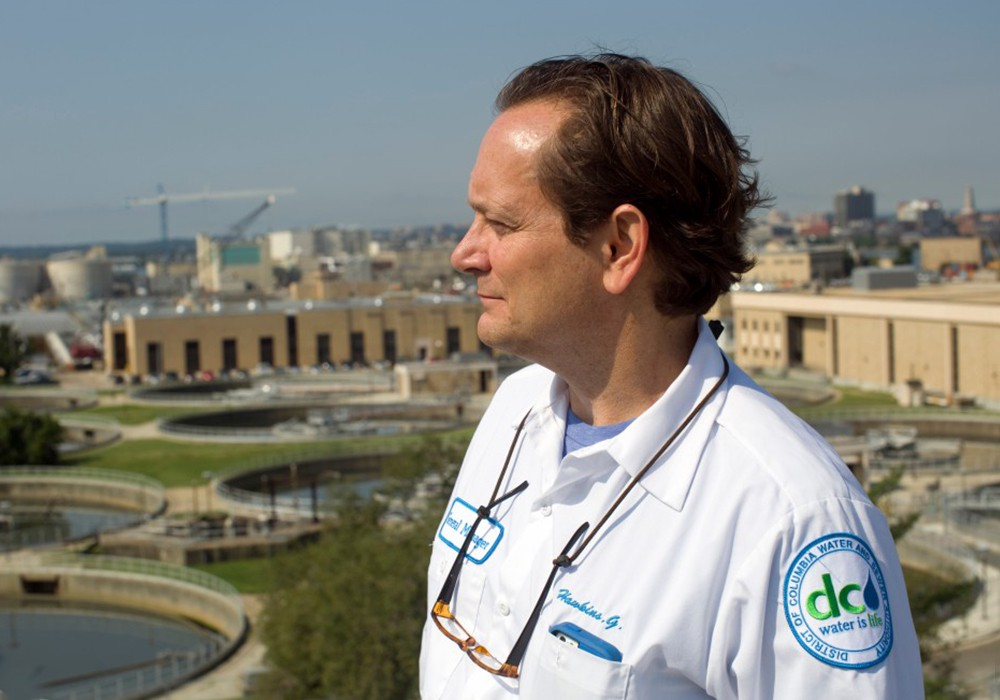 George Hawkins turned the stodgy bureaucracy of Washington, D.C.’s water utility into an engine of innovation.

When George Hawkins took the reins at the  Washington, D.C. , Water and Sewer Authority in 2009, he knew he’d have to hike water rates substantially. New infrastructure required under the Clean Water Act was set to cost billions. To build the political support he’d need, he knew he’d have to improve relationships with the utility’s customers — fast.

In doing so, he transformed both the public image and internal culture of what before had been a functional but inward-looking agency. Most visibly, he rebranded the agency as  DC Water  and elevated the dirty job of handling sewage into a sexy environmentalist mission. He also turned the agency into a hotbed of innovation, with everyone from Ph.D. researchers to frontline workers inventing new products and processes, a dozen of which resulted in patents. Last year, DC Water launched  Blue Drop , a nonprofit enterprise that now markets these products to generate extra revenue that can help protect residents from higher rates.

Hawkins, 57, retired from DC Water in January and is now writing a book about his work transforming the agency. We asked about some of his insights on public-sector innovation and leadership.

Bloomberg Cities: You’ve said public water utilities across the U.S. and the world have a failing business model. Why?

George Hawkins:  The customers don’t like us — if they know us at all. Without the customer relationship, nothing else works. We have these unbelievable financial needs. Why would customers want to pay more for something if they don’t know why?

In most places, the bills have nothing to do with the actual cost of getting the customer a gallon of water. It’s just related to what the past water bills have been, and that’s often subsidized because politicians want to keep prices low. We need to be charging what it costs us to deliver the service. Because if we’re not, it means that we’re not investing in the system like we ought to and it’s going to get worse and worse.

Every little community has their own water utility — there are 65,000 of them. I’ve been really impressed with the people I’ve met in the industry, but they’re in a system that is breathtakingly inefficient and in conflict with innovation for reasons that are understandable and rational. The outcome is that water utilities don’t change very much.

How did you tackle this problem?

I became convinced that we had to become as good at customer relations as Nike or anyone who has to fight for a customer. As a monopoly, we don’t  have  to fight for a customer. But our customers have the ultimate power over us. My wish was that if I asked for $5, our customers would say, “How about $10?” because they understood that our service was fundamental to them and that every dollar they invested was directly related to their wellbeing.

[Get the latest news on urban innovation!   Subscribe to SPARK. ]

We completely changed the way we did rate hearings. There used to be like 10 people who would show up. And that was considered a victory because we would get the rate through and nobody knew it. I thought that is  not  a victory. A, you’re not getting the rates that you need, and B, nobody knows. So we did town halls. I did all of them myself, and we would do them in each ward of the city in a place selected by the council member of that ward. Then we invited anybody who’d contacted us for any reason in the prior two years — and people don’t usually contact us to say nice things.

I’d give a presentation and stand in front of our ratepayers and answer any question they had. And, at each rate hearing, we brought our personnel office, our contracting office, our hiring office, our engineering office, our customer-service office, they all were there. It completely changed our relationship. You can come and yell at me — and I did have two police officers with me — but my reaction was, if someone’s out there that’s mad and you don’t hear it, it’s just festering.

What about branding and communications?

We rebranded to DC Water. We didn’t hire anybody, I didn’t have the budget. We just opened it up to the public to propose new logos. And it was hilarious. We got turds, toilets, fire hydrants — 178 entries came in. We ended up with “DC” with the water drop — it’s really simple, with bright blue and green. They’re environmental colors. “Water is life” was my little phrase. We had to connect with people on a fundamental level.

Under Hawkins, D.C. WASA rebranded itself as DC Water.

When the board started seeing the support we were getting in the community, I then hired more external-affairs people — now there’s 13 or 14 of them. Full-time social media. We had a Twitter account and my goal was, if you tweet us with a problem, I will roll in a truck within half an hour. The board saw the direct consequence of that. We got every single rate increase we asked for. People will pay for something they value. And that goes back to building the relationship with the customer.

I went to every major water main break. The media is there. It’s a chance to tell them that the pipe that just broke was put in the ground in 1920. Rather than shy away from it, it’s a chance to show how fast we get there and how quickly we get it fixed. That’s what we’re trying to do with these rate increases — to replace these pipes.

What tone did you set with employees of the department?

The first thing I did after being hired was to walk around the facilities and listen to employees. I said, “How can we make this a better place for you?” We wanted the team to know that change is not happening  to  you, it’s happening  with  and  for  you.

And how did that pay off?

One of our most successful innovations came from one of our older staffers in the machine shop, who has since retired. There’s a thing called a sewer pick used to pick up manhole covers; it’s really long, has a hook on it, and looks like it was invented in 1400 AD. If you wanted to design something that was guaranteed to hurt your back, this is it — and there’s always been complaints about back problems on the team. This guy invented a full-length sewer pick with a bend in it. We patented it. It’s better for the back and reduces injuries. And it was a frontline idea.

We also partnered with local universities and now have about 20 really smart Ph.D.-level research projects underway — at almost no cost. This is where most of our patents have come from.

Tell us more about some of those innovations.

If there’s a leak in your toilet, most water utilities just bill you at the end of the month for the extra use, and then there’s this battle with the customer. For the utility, it’s money in the short run, but to me, it’s the worst money to make because the customer didn’t know they were using the water. So we wrote software for a system that sends customers a text message or email when their usage goes outside the normal amount. It’s the most popular program we’ve ever run.

We are also helping invent a drinking fountain that addresses lead in the water at schools. It has built-in sensors that can send alerts on water quality and filter condition.

I’d say our biggest innovation bet was on a system that takes the 1,200 tons of biosolids we produce every day — the sludge that’s leftover after wastewater treatment — and turns it into a soil conditioner called  Bloom , which we now sell in bulk to landscape companies. It also produces electricity and is the largest clean energy project in the Mid-Atlantic.