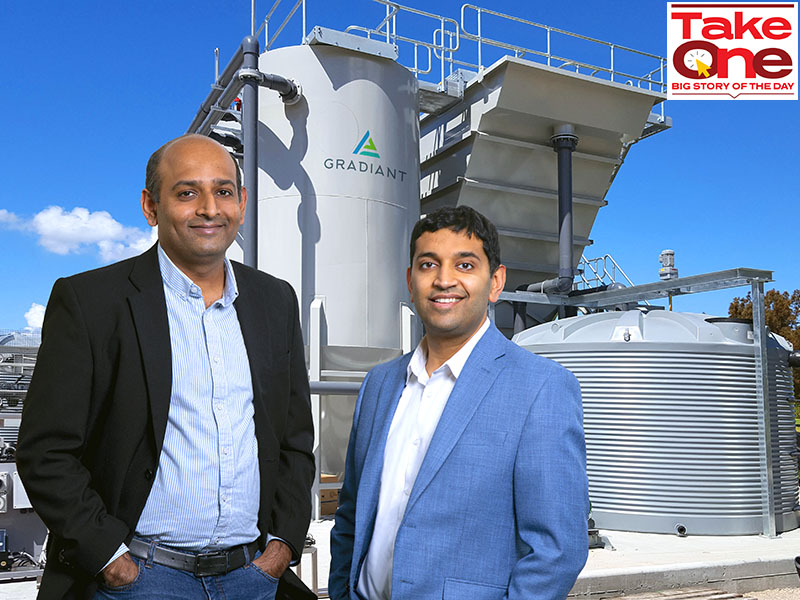 One could say Prakash Govindan’s entrepreneurial journey started when his friend Anurag Bajpayee convinced him to start a company based on his PhD research. They were both at the Massachusetts Institute of Technology. Or one could say it started with hefting bucketsful of water, growing up in Chennai, which gave Govindan the personal experience of how important a resource it is.

Fast forward some 25 years from those days in Chennai, Govindan and Bajpayee’s company, Gradiant Corp., just won $20 million in contracts to provide water treatment technologies to three industrial projects in India. The name is also a play on gradients, of all sorts, which Govindan says play a vital role in many natural and industrial processes.

The Boston-headquartered company the duo built over the last 10 years is poised for rapid growth in providing end-to-end bespoke water treatment solutions to the world’s biggest corporations—in downstream oil and gas, pharmaceuticals, semiconductor companies, and a recent foray into photovoltaic manufacturers, including in India. “Gradiant has evolved from a one-technology startup to an end-to-end water treatment solution provider,” Govindan says.

Consider semiconductors, for example. An average size semiconductor foundry consumes about 10 million gallons (37.85 million litres) of water a day. That is typically withdrawn from groundwater, which could otherwise be used for human consumption.

In the process of making the semiconductor wafers and other products, the foundries contaminate the water they use with minerals, chemicals, and various other toxic contaminants. And they produce various kinds of waste.

What Gradiant does is to treat those waste streams to return as much as 95 percent of fresh water, Govindan says. Therefore, instead of drawing 10 million gallons every day from the ground water source, the foundry needs to draw only 500,000 gallons more each day. The impact of Gradiant’s products is that they can significantly reduce the need to draw precious fresh water for industrial use.

In Taiwan, for example, home to the world’s biggest semiconductor companies, 65 percent of the water withdrawal is by the semiconductor industry. In Chile, in the Atacama province, about 70 percent of all water withdrawal is for mining. And in India, as the economy grows, industrial use, especially water taken up by the power sector, accounts for much of the incremental withdrawal, according to the International Energy Agency.

In the semiconductor foundry example, “If you can recycle 95 percent of that water within the industry, it has a huge impact on the water availability for local consumption. You can imagine the impact that this kind of circular economy can have,” Govindan says.

The lifecycle cost of water includes the cost of sourcing the water, the cost of disposing contaminated waste, and the cost of handling that water in the interim. Compared to that, “when you put a Gradiant treatment system for a chip foundry, we are typically half the cost of the existing cost of water,” he says.

In addition to technology, equipment and project development, Gradiant offers digital solutions for water treatment plants. Over the last three years, and helped by an acquisition, Gradiant has developed a product called Smart Ops, for managing data and optimizing the operations of treatment plants using machine learning and artificial intelligence.

Today, Gradiant has about 250 patents that cover about nine different technologies. About seven of those technologies are commercial, and about five of those are “advanced commercial,” Govindan says.

One innovation that Gradiant commercialised is a way to take reverse osmosis—a 60-70 year old process—and removing some of its critical limitations. They designed their product, called RO Infinity, to include a process called “counter-flow” that allowed them to deal with a natural limitation to extraction of clean water as the process leaves behind higher and higher salt concentrations in the remaining solution.