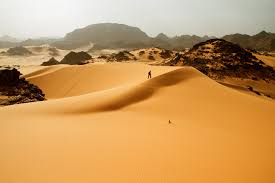 Year after year, the world witnesses the devastating consequences of climate change, and how it is worsening drought. And even though more people are raising awareness about it, there is still a long way to go before we can really combat it. Drought can be a real threat to our survival, especially in regions where water can be scarce. For instance, it is reported that more than 80% of the Arab region is a desert, which makes the Arab World more prone to the detrimental impact of drought.

However, since we live in a time where technology can be a great asset, why not take a look at how it can help in the fight against drought?

Among the arid lands in the Arab region is UAE, which has been in constant war with desertification and drought. The need for an urgent way to tackle desertification has led the UAE to invest even more in technology. The country has already used cloud-seeding, in which clouds produce rain artificially, in order to increase its rainfall. It is said that cloud-seeding has increased rainfall by around 30% in clean skies and 15% in dusty skies, the latter being more common.

And in an attempt to upgrade their game, the UAE is now aiming to use drones to produce rainfall. UAE turned to UK researchers to look into using drones that induce electricity into clouds and thus encourage raindrops to form.

“Equipped with a payload of electric charge emission instruments and customized sensors, these drones will fly at low altitudes and deliver an electric charge to air molecules, which should encourage precipitation,” - Alya Al-Mazroui, Director of UAE’s rain enhancement science research program

Another viable approach is using agri-tech farms to enhance crop yields and reduce water usage. Liquid NanoClay (LNC) was invented by Norwegian start-up, Desert Control, to help make soil arable and thus improving crop yields and reducing the needed water. It was initially tested in the UAE and the results showed a production increase when using half of the water when compared to conventional farming methods. It is reported that after UAE, the start-up aims to move on to Saudi Arabia to help fight the drought there as well.

The UAE is not the only country trying to fight desertification and drought. Saudi Arabia is also known for being wildly covered by desert and is thus also prone to drought. Therefore, the country turned to Spanish water technology company, Hidroconta, to control and monitor water withdrawal in Al Jouf province in Saudi Arabia.

With desert covering most of the Arab world, it is imperative that governments and companies act more aggressively and proactively towards finding ways to combat the drought that can potentially be a major threat to our survival.