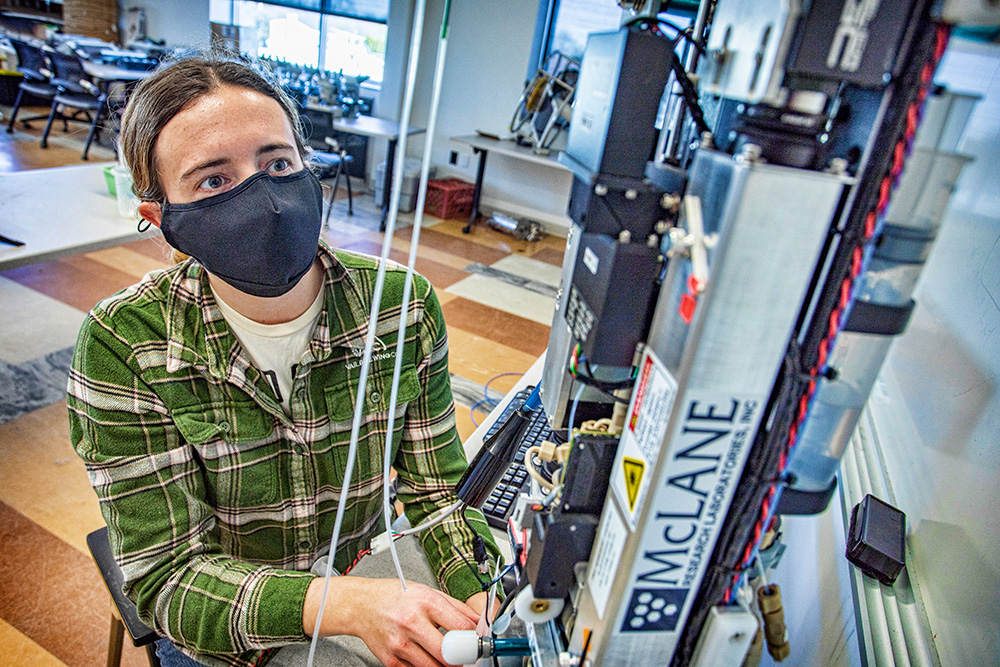 Graduate student Rebecca Rogers with the Imaging FlowCytobot (IFCB) at the Marine Sciences Center in Southampton.

The IFCB is a cutting-edge technology used to aid in the research efforts of marine scientists — an automated submersible imaging flow cytometer that generates images of particles in-flow taken from the aquatic environment.

A graduate student in the School of Marine and Atmospheric Sciences (SoMAS), Rogers works with the IFCB, which provides real-time images and identification of all species and, for the purposes of Rogers’ research, HABS, or harmful algal bloom species. The IFCB takes the picture; its operators use the images and computer programs to teach a classifier to identify the images faster than Rogers and others can collect and identify samples.

Built by McLane Research Laboratories, the IFCB can classify images with great specificity — to the genus or even species level with demonstrated accuracy comparable to that of human experts.

“We can collect images from it 24/7 and in some bays where we know the HABs are annual or frequent, the IFCB will allow us to have early detection of low levels of the HAB species that might not be easily detectable in other monitoring,” said Rogers. “But if you can imagine the number of water bodies on Long Island, it is hard to monitor any of them with the frequency that the IFCB can.  The IFCB will allow us to look at the water even when we don’t sample for HABs.”

Rogers added that the machine’s cost prevents placing one in every body of water around Long Island. “But with this machine, we can hopefully catch some blooms earlier and start more frequent monitoring in other areas or warn shellfish farmers to take any action needed.”

Rogers explained that researchers sample locations once a week, or they get a sample where the water color has changed, which it does for some HAB species. “So unless you have the people power to keep collecting samples every hour of every day, it can be tough to catch a bloom early sometimes,” Rogers said. 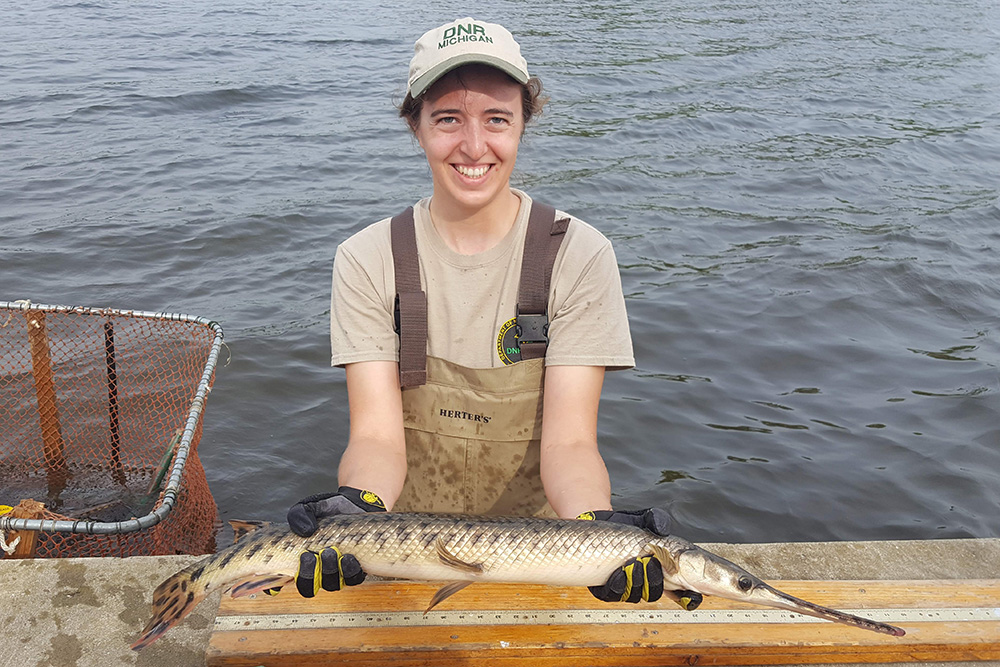 Rebecca Rogers with a longnose gar.

The IFCB takes about a teaspoon every 20 minutes through a syringe and takes pictures of all the plankton with chlorophyll (phytoplankton) within, and uses lasers to distinguish between the chlorophyll and other debris that goes through the syringe. “We can get the pictures off the machine and run them through a program to generate features, ranging from how big it is, how round, to other features that computer scientists have determined are features on phytoplankton and then use image classification to identify the images,” she said.

There are probably about 100 or so IFCB machines around the world, mostly in the U.S., and Stony Brook has two — one deployed in Old Fort Pond in Southampton and one used in the lab.