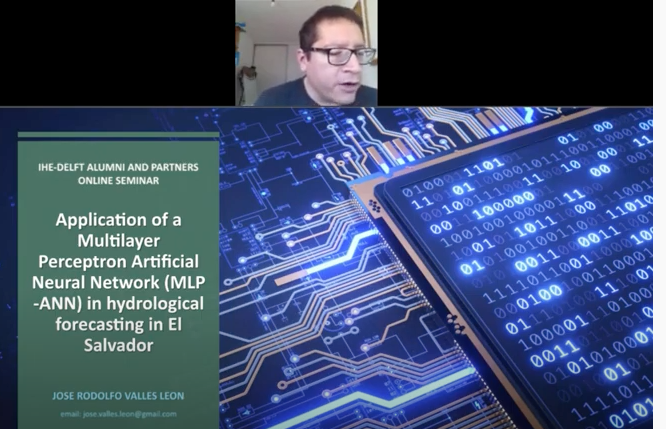 This case study is given by alumnus José Rodolfo Valles León, Hydraulic Engineer at MVOTMA in Uruguay. It is part of the Alumni & Partners Online Seminar on Artificial Intelligence on Water Resources. The introductory video can be viewed here: https://youtu.be/457aiB33kzE

Flood Early Warning System (EWS) has been implemented in the Grande de San Miguel catchment in El Salvador with local inhabitants, governmental sector, and the National Hydro-meteorological Service since 1998. Nevertheless, a rainfall-runoff forecast model has not been implemented in this catchment to predict and anticipate to flood conditions. In Jose Valles’s research work at the Ministry of Environment and Natural Resources of El Salvador (MARN), he proposed the implementation of Multilayer Perceptron Artificial Neural Network (MLP-ANN) model as an operational flood forecast model in Grande de San Miguel catchment to address the short-term flood forecast.

The MLP-ANN is defined by Solomatine and Wagener (2011) as a device that consists of several layers of mutually interconnected neurons, which transform the inputs using a multiparameter nonlinear transformation, so the resulting model is capable of approximate complex input-output relationships. The MLP-ANN models were trained and validated using past observed rainfall and discharge values from MARN to predict future flood conditions with a forecast lead time of twelve hours. The trained MLP-ANN forecast model uses real time observations from the catchment and provides a real time flood guidance for stakeholders and decision makers in El Salvador.

The forecast model output can be seen at the following web address: http://srt.snet.gob.sv/apps/public/pr...

About the speaker MSc Jose Valles is a civil engineer with a Master’s degree in water science and Engineering specialization Hydroinformatics in IHE Delft the Netherlands. He has 9-year experience in Hydrological models, Data-Driven Models, hydrological forecasting, drought analysis, and impact of climate change on water resources in El Salvador and Uruguay. Before joining the National Directorate of Water of Uruguay (DINAGUA, for its acronym in Spanish), he worked as hydrological forecast in El Salvador at the Ministry of Environment and Natural Resources of El Salvador. Currently, he is the manager of the Situation and Forecast Room of DINAGUA Uruguay.