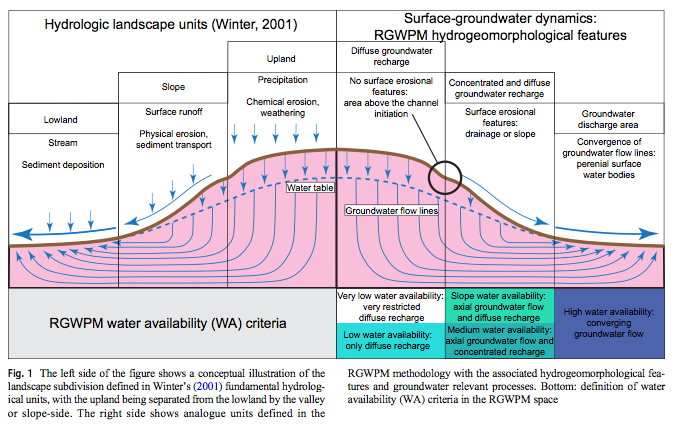 Emergency responses in humanitarian contexts require rapid set-up of water supply. Boreholes are often drilled where the needs are highest and not where hydrogeological conditions are most favourable. The Rapid Groundwater Potential Mapping (RGWPM) methodology was therefore developed as a practical tool to support borehole siting when time is critical, allowing strategic planning of geophysical campaigns.

RGWPM is based on the combined analysis of satellite images, digital elevation models and geological maps, obtained through spatial overlay of the two main hydrogeological variables controlling groundwater potential: water availability (WA) and reservoir capacity (RC). The WA associates hydrogeomorphological features to groundwater dynamic processes, while the RC reflects estimates of the hydraulic conductivity. RGWPM maps are produced through an overlay of WA and RC with the overall groundwater potential (GWP) characterized as ‘very low’, ‘low’, ‘medium’, and ‘high’, with each zone associated to a specific water supply option. The first RGWPM map was elaborated during a drilling campaign in Northern Uganda.

The average yield for the eight boreholes sited ‘with’ RGWPM was 35 m3 /h versus 3 m3 /h for the 92 preexisting boreholes that were sited ‘without’ RGWPM. Statistical comparison of the classified yields of all hundred boreholes with the RGWPM predicted-yield ranges revealed a good correlation for the ‘low’ GWP unit, highlighting areas where well siting for motorised systems should be avoided. A rather poor correlation of 33% was found for the ‘medium’ GWP unit, believed to be artificially induced by the numerous hand pumps (low yields) located in potentially higher yielding areas.