In Latin America, farmers use microfinance to fight climate change 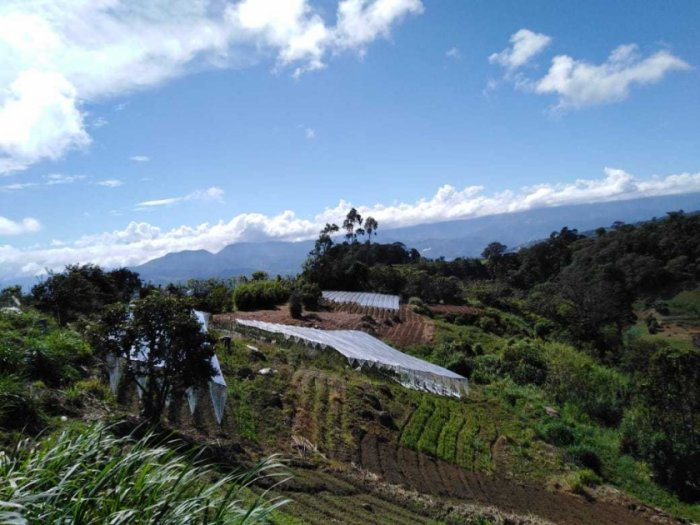 Sonia Gómez has spent her entire life around agriculture. She grew up on her parents’ plantation in the fertile mountains of Costa Rica before opening her own organic farm several years ago. But that experience did little to prepare her for what has become a dire threat to her business: climate change.

Increasingly severe cycles of drought and flooding – which are being driven by global warming – have wreaked havoc on her crops of chilis, tomatoes and carrots.

“We don't know when it will rain or when it will be sunny,” says Gómez, whose farm is in the foothills of Costa Rica’s tallest volcano, Irazú. “It is difficult for us, as farmers, to work like this.”

Globally, more than 1.5 billion people live or work on small farms, like Gomez's. They often cannot afford the advanced technology that could help them contend with the fallout from climate change.

The United Nations Environment Programme (UNEP) and Gomez are hoping to change that. In late November, Gomez's farm became an official test bed for low-cost, environmentally friendly technology designed to help farmers adapt to a changing climate. It now features everything from a seed bank to a high-tech irrigation system.

The effort is part of the Microfinance for Ecosystem-based Adaptation (MEbA) project, spearheaded by UNEP and implemented in Costa Rica along with Fundecooperación, a non-profit group and microfinance bank. Along with supporting the creation of 11 test farms, the initiative has worked with micro-lenders across Latin America to provide 17,000 loans to small-hold farmers looking to invest in eco-friendly solutions.

“Helping small-scale farmers to adapt to climate change is crucial to fighting poverty, ensuring food security and preserving the biodiversity that provides us with vital resources,” says Leo Heileman, UNEP Regional Director in Latin America and the Caribbean. “This move towards more sustainable and resilient agriculture requires the full support of financial institutions.”

While it produces relatively little carbon dioxide itself, Latin America and the Caribbean is vulnerable to extreme weather induced by a changing climate. This is especially true in the so-called Dry Corridor of Central America, which includes El Salvador, Honduras and Nicaragua. More than 2 million people there depend on subsistence farming and by the end of the century, temperatures could rise up to 7 °C, according to some projections. That, say experts, would drastically alter weather patterns.

Since 2012, MEbA has provided technical assistance to financial institutions, helping them disburse more than US$ 29 million in loans to small-scale farmers in Colombia, Costa Rica, Ecuador, El Salvador, Peru and the Dominican Republic.

That financing has allowed farmers to re-invest in their land. Gomez's farm, which she calls La Sanita, Spanish for "healthy", features several innovations designed to safeguard against extreme weather. Those include a rainwater collection system built atop a greenhouse Gomez previously erected through a microloan from Fundecooperación. It funnels water directly to the roots of her plants through drip irrigation, reducing water loss through evaporation.

The farm, located in the province of Cartago, also has an organic fertilizer laboratory to improve soil productivity and a bank to preserve organic-grade seeds. As well, Gomez planted fruit trees and perennial herbs in the steepest areas of her farm to reduce soil erosion.

After months of restrictions due to the COVID-19 pandemic, the farm was formally inaugurated on 25 November during an online event. It wasn't the only 'demonstration plot' -- another one, the Xoloitzcuintle farm, which grows vegetables for the country's famed hot sauces, joined La Sanita in proving the MEbA project's success in Cartago province.

The Xoloitzcuintle farm, led by María Fernanda Masís, is recovering the quality of its soil to cope with extreme weather events. Years of mechanical tillage and agrochemicals resulted in compacted soil, with little organic matter, that erodes easily when heavy rains arrive.

With support from the project, the farm is finding solutions for water management. Some are straightforward, like digging trenches to infiltrate water output, others more complex, like drip irrigation systems. Masís has also turned to organic fertilizers and put in place a silvo-agricultural system that taps into the farm’s timber and fruit trees.

"Teaching by example is our best option,” said Marianella Feoli, Executive Director of Fundecooperación. “Demonstration farms [like La Sanita and Xoloitzcuintle] facilitate exchanges between producers and help them learn from each other’s experiences and invest in similar solutions through specialized credit products."

MEbA is a project implemented by the UNEP Regional Office in Latin America and the Caribbean, financed by the Federal Ministry for the Environment, Nature Protection and Nuclear Safety of Germany.