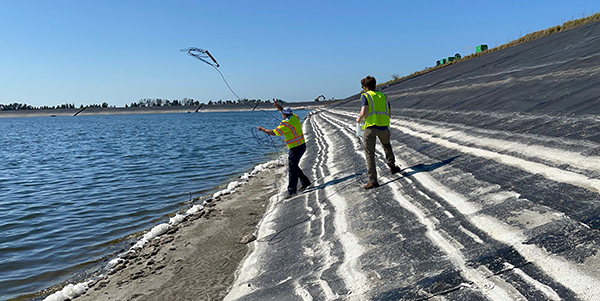 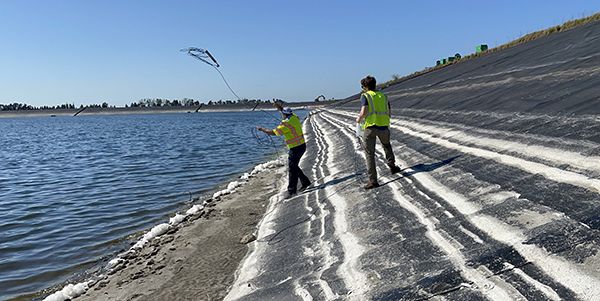 Overview
When Nclear was called in to treat 250 million gallons of wastewater following a breach at the defunct Piney Point phosphate plant, they needed the right tools, including their own technologies for phosphorous and ammonia removal and the Aqua TROLL 500 for easy and accurate water quality monitoring.

Challenge
In March 2021, at the former Piney Point phosphate plant in Manatee County, Florida, what had long been feared came to pass: a phosphogypsum stack containing a reservoir filled to the brim with phosphorous- and ammonia-laden wastewater began to fail.

Fearing a devastating flood, authorities evacuated more than 300 homes over Easter weekend, and more than 20 million gallons of the polluted water were released into Tampa Bay.

As the state worked to patch the breach, it also called in a team from Nclear Inc. to remediate the disaster. The plan was to treat the remaining 250 million gallons of water in the reservoir and release the treated water into the bay.

Time was of the essence, given the real possibility of catastrophic berm failure and the imminent threat to surrounding communities and the environment.

Solution
Nclear was well-suited to the task. The Atlanta-based company specializes in treating nutrient pollution, eutrophication and harmful algal blooms with its non-toxic TPX™ nanocrystal technology. And it had just recently merged with Electrichlor Inc., a company out of Laramie, WY, that uses its proprietary ElectrX™ technology to oxidize ammonia into harmless nitrogen gas.

Nclear CTO and Electrichlor President Dr. Kent Henry was part of the Piney Point team that directed round-the-clock efforts to pull the phosphorous and ammonia from millions of gallons of water and restore its pH balance for release into the bay.

“When you treat water like this, you typically need a holding tank, a settling area and time for the chemistry to occur,” says Henry. “We didn’t have time to buy, design, architect and build all of that, so we worked with what we had, which was a smaller 30-acre pond next to the larger 70-acre pond that had breached.”

The plan was to partition the small pond into several zones and pump the polluted water from the large pond into the small pond, where it would move through an ad hoc treatment process. But first they needed more information about the water and the site.

“We took a little motorboat out onto the smaller pond and used an Aqua TROLL 500 to get details on conductivity, temperature, pH, ORP and ammonia. Then we trolled the pond, dragging the sonde behind us to get a depth profile, and mapped it,” he says.

This was bad water, with a pH of 10, high ammonia and phosphorous, and an alligator to boot, Henry recalls. It was also heavily striated. So, the team profiled it with the Aqua TROLL to understand the gradients of ammonia and pH.

With a clear picture of the small pond, the team was able to validate the timing of the treatment process and, after some brief testing, get started.

Getting rid of the bad stuff

Henry’s job was to control the breakpoint. Treating for ammonia that was 145 parts per million at that point, they dosed concentrated sodium hypochlorite (12.5% bleach) at a consumption rate of 3 to 20 gallons per minute, nominally eight and a half times more chlorine than ammonia, to convert the ammonia to nitrogen gas and establish a minimal level of free chlorine.

Treatment Station 3 was used for chlorine storage. (The project consumed five tanker-truck loads of bleach per day—enough to affect the price of bleach nationally in the time of Covid.) At Treatment Station 4 the water was suitable for discharge and was directed back to the large reservoir where it would go through the process again, treating the water in the large reservoir incrementally until all of it had been recirculated through the treatment processes.

Throughout the project, a team member would regularly throw the cabled Aqua TROLL 500 from the side of the large reservoir and drag it through the water for water quality readings.

“Not only was the Aqua TROLL a convenient size, it was also really easy to use,” says Henry. “I had eight scientists working 24/7, and I was able to train each of them on how to use it in just a few minutes.”

Results
Ultimately the breach in the gypsum stack was repaired, and the months-long treatment process completed. The Nclear team removed the majority of the phosphorous and ammonia from the 250-million-gallon reservoir, but not a single additional gallon was released. After the initial emergency release of untreated water into the bay, there was little appetite for sending more Piney Point water—clean or not—into such a delicate ecosystem.

Instead, the state plans to use deep injection wells to push the water from all of the Piney Point ponds, some of which are still polluted, 7,000 feet underground. Regulators say Piney Point will then be permanently shut down. What happens to more than two dozen other phosphate plants in the state is less certain.

Henry says it’s likely that disasters like the one at Piney Point will become more common, as more aging and neglected infrastructure fails and we see more intense weather events. He expects Nclear, with its proven remediation technologies, will stay busy and says he plans to use the Aqua TROLL in other projects, potentially incorporating In-Situ’s VuLink telemetry for remote data collection.

“The Aqua TROLL did what we needed it to do, and we would definitely use it again,” he says. 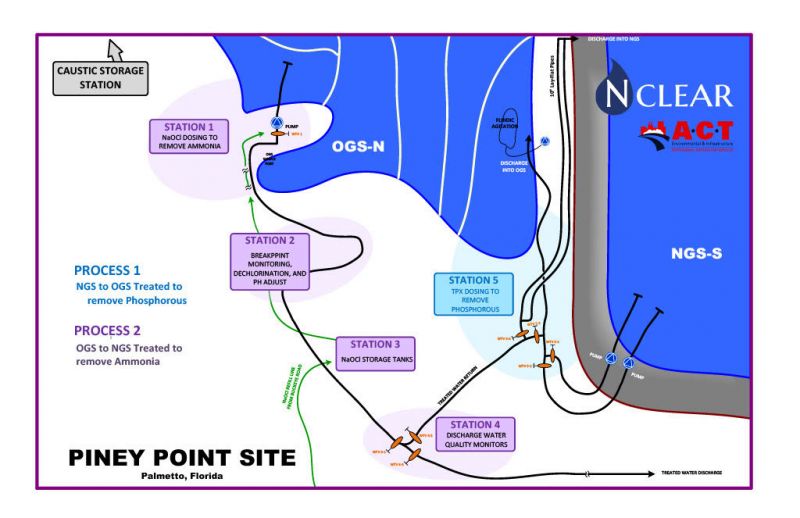