Inspired by the pufferfish, this hydrogel purifies water using nothing but sunlight 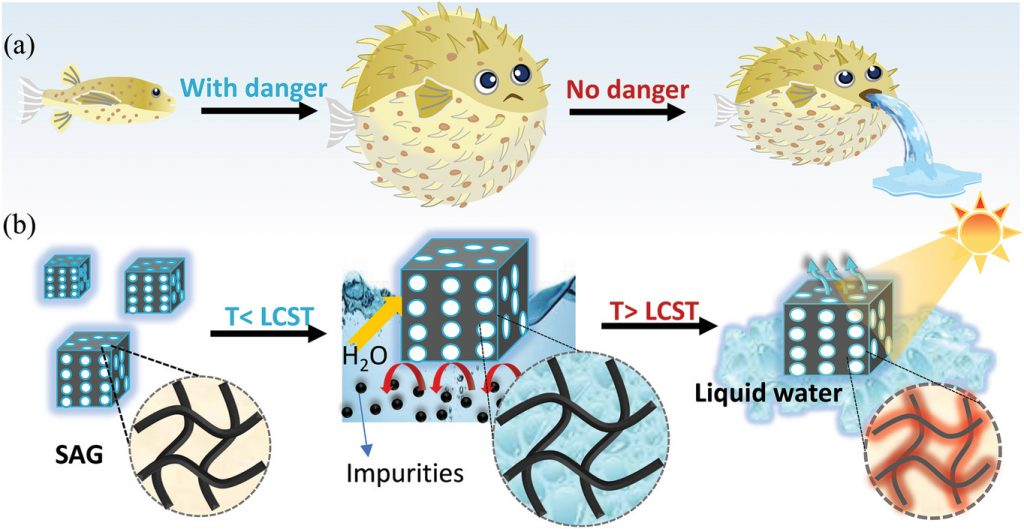 As population growth is expected to continue, with an increase to roughly 9.7 billion people by 2050, the global demand for clean and safe water will grow with it.

Contaminated water poses are serious global health problem, resulting in an estimated 500,000 diarrhoeal deaths each year and contributing to the transmission of diseases such as cholera, malaria, and typhoid. As soon as 2025, half of the world’s population will be living in water-stressed areas, which means solutions to the challenge of providing clean and accessible drinking water, especially in impoverished countries, is of paramount importance.

In a recent study published in  Advanced Materials , a group of researchers led by Professor Rodney Priestley of Princeton University took inspiration from nature when developing their “solar absorber gel” to purify contaminated water using only natural sunlight.

“A solution to the water scarcity problem must be environmentally benign and not result in further strain on clean water availability,” they wrote in their paper. “It is critical to avoid the crippling resource tradeoff between energy and water, that is, the so‐called energy‐water nexus.” Solar‐driven water evaporation, they say, is a promising and sustainable strategy in this regard.

Solar water purification is a developed technology that uses sunlight to drive the evaporation of water — leaving contaminants behind — usually using electricity generated through solar panels or solar heat collectors. While a promising solution to a growing water crisis, limitations in the technology, specifically the water production rate, need to be overcome before it can be made more viable.

This is what Priestley and his co-workers set out to do using their solar absorber gel, which negates the need to heat and evaporate water at all. It is instead modeled off the pufferfish’s ability inflate and deflate itself with water in response to danger, but in this case absorbing contaminated water and spitting out clean drinking water.

Hydrogels, which are water-absorbing materials made up of a network of crosslinked polymers, are perfect pufferfish mimics in this sense. The team used a class of heat-responsive hydrogels that can regulate their ability to absorb or repel water when exposed to a critical switching temperature of ≈33 °C — a temperature readily achieved using natural sunlight.

Hydrogels on their own are not capable of absorbing or responding to sunlight, so the material in this work was fitted with a solar energy harvesting molecule. In the current study, the team used polydopamine (PDA), a melanin‐based polymer that exhibits broadband solar absorption and conversion efficiency of light. This allowed the team to create a hydrogel that when warmed by sunlight, responds to the induced heat change by releasing the water it has absorbed.

“PDA offers additional properties of benefit for water purification: the presence of amino groups and aromatic rings endow PDA with the ability to remove heavy metal ions and organic dyes through chelation and hydrogen bonding,” said the authors. Two birds with one stone.

The final purifier is fabricated by depositing PDA and another polymer called sodium alginate (which helps repel salts) onto a macroporous heat-responsive hydrogel. When immersed in contaminated water, the solar absorber gel, called SAG by the team, absorbed large quantities of water while repelling salts, bacteria, oils, and other pollutants. Then, when exposed to sunlight, the gel heated up, triggering a phase change that resulted in the expulsion of clean, liquid water. No evaporation required!

“This multi‐modal mechanism of pure water production under natural sunlight opens a new paradigm for high‐rate clean water production from contaminated water sources using renewable solar energy,” wrote the authors. “It is our desire that these attractive features may pave the way for SAG to improve the health of many in society by providing access to a vital resource, clean water.”