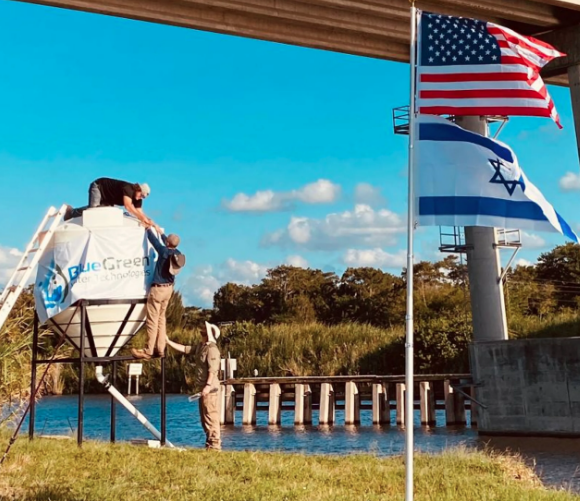 An Israeli company has been given a $945,000 state contract to keep blue-green algae in Lake Okeechobee from getting into the St. Lucie River estuary (East Coast Florida USA).

The company, BlueGreen Water Technologies, deployed at the Port Mayaca Lock and Dam, where discharged lake water enters the C-44 Canal and heads toward the estuary, soon after the Army Corps of Engineers began discharges Oct. 14.

To be clear, there's a lot of blue-green algae in Lake O; it just hasn't made its way out the gates at Port Mayaca — yet.

The most recent satellite images of the lake have been obscured by clouds; but an image taken Thursday shows widespread blue-green algae, with the thickest bloom in the center of the lake.

In the most recent water sampling, taken Oct. 12 on the lake side of the Port Mayaca Lock and Dam, a South Florida Water Management District crew reported no visible algae; and tests by the Florida Department of Environmental Protection found no toxins.

A satellite image taken Thursday, Oct. 15, 2020, shows widespread blue-green algae on Lake Okeechobee, with the thickest bloom in the center of the lake.

Still, a BlueGreen Water crew spread some algicide Monday in the western end of the C-44 Cana "as a dry run," said CEO Eyal Harel.

"We want to see how it moves and how it acts in the flowing water so we'll be ready for a full application. We want to make sure that, if the algae comes into the canal, we can nip it in the bud."

The algicide, called Lake Guard Oxy with hydrogen peroxide as its active ingredient, floats on top of the water "where most of the algae is," Harel said. "So it is flowing along with its target. That allows us to use very small doses."

The algicide not only kills the algae cells it comes in contact with, Harel said, it sends out a biological signal that causes "a chain reaction, like a communal suicide in the other cells around it. The process is quite amazing."

More:  Algae can be killed, but be careful, says UF prof

A common drawback in using algicides is that "they kill algae, but they often kill a lot of other stuff," said Ed Phlips, an algae expert at the University of Florida.

"They're not necessarily a dangerous chemical like DDT," Phlips said, "but they need to be fully tested to make sure there are no unintended consequences. That may not be a big deal if you're wanting to clean out a pond, but it is a big deal when you've got a big project, like Lake Okeechobee or the water coming out of it."

Harel said hydrogen peroxide has proven to be "highly specific," killing only the target algae and not affecting other species in the water.

"And because we apply the product surgically, you might say, we are able to use only very, very small amounts; roughly one pound per acre," he said.

The algicide remains active 4-6 hours before dissolving into water and oxygen "so that it doesn't leave any trace chemicals," Harel said.

Use early, use less

To minimize the amount of algicide needed, he added, "We prefer to use our product like we will here, as a preventative measure at the onset of a bloom. We would have to use more if the bloom is allowed to build up."

The company already had a $1.7 million state contract to clear algae out of Lake Minneola west of Orlando, a project designed to see if the algicide could be used effectively on Lake Okeechobee discharges.

When the discharges started, Harel said, "we were called by DEP to come immediately. We were on the site with our product in 48 hours."

The company has set up shop at Port Mayaca Lock — "under the Israeli flag, which is under a U.S flag," Harel said — and has monitoring points along the C-44 Canal.

The Port Mayaca Lock and Dam stands between a rising Lake Okeechobee and the St. Lucie River

"If we see the water still has algae in it, we can apply more product," Harel said. "The goal is to not have any algae in the water when it reaches the estuary."

The state contract calls for the company to be onsite for another two weeks, Harel said.

In announcing the start of the discharges Oct. 14, Col. Andrew Kelly, Army Corps commander for Florida, said they were expected to last about four weeks.

Asked if the firm gets paid whether algae-laden water is discharged into the canal or not, Harel replied, "We're paid to make sure no algae entering the canal gets into the estuary."

The company is not working on the west side of the lake, where water is being discharged into the Caloosahatchee River.

"There were discussions about deploying on the west side of the lake," Harel said, "but in the short time we had to prepare, we don't have sufficient product to handle it."

The water being discharged to the Caloosahatchee is more than twice as much as that to the St. Lucie.

If the company is successful in stopping algae from reaching the St. Lucie River during this round of discharges, "we absolutely would be interested in working there in the future," Harel said.

Tyler Treadway is an environment reporter who specializes in issues facing the Indian River Lagoon. Support his work on TCPalm.com.  Contact him at 772-221-4219 and tyler.treadway@tcpalm.com.