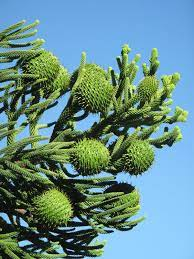 Araucaria Columnaris is a kind of evergreen tree, Araucaria has a particularly dense and stiff petal structure that moves fluids in a peculiar way.

This form of real-life water bending, harnessing the characteristics of this plant could help scientists control the flow of water and other fluids like never before, which Wang tells Inverse could lead to breakthroughs in areas like desalination and electronic cooling.

Such innovation would be crucial in low-resource areas where power and clean water may be limited.

The findings were published Thursday in the journal Science.

WHAT’S NEW — When water drips off leaves, Wang explains that it does so in a way that uses the least amount of energy. Usually, this means succumbing to the weight of gravity and letting water flow downwards. For the individual ratchets of the Araucaria plant, this isn’t always the case.

Instead, this plant uses the shape of its ratchets (the term Wang and colleagues use for the needles) to discriminate between different fluid types based on their surface tension and send them in different directions — either forward along the longitudinal curve or backward along its transverse underside.

“Preliminary studies identified that ethanol spreads along the ratchet-tilting direction whereas water propagates in the opposite direction,” says Wang.

If the Araucaria leaf was a microscopic waterpark ride, then the ratchets act as an automatic sensor to change to rides course accordingly for different passengers.

HOW THEY DID IT — Instead of collecting bunches of Araucaria for their work, the team took what they learned from the plant’s natural design and created a bioinspired surface to mimic it, fittingly called ALIS (Araucaria leaf-inspired surface.)

While the pallid and plastic-y appearance of ALIS doesn’t look very plantlike, the key similarity is the asymmetrical array of 3D ratchets on its surface like tiny hairbrush bristles. Through a number of experiments on different fluids, including water mixed with both ethanol and salt, Wang says the team demonstrated that this design effectively provided directional steering, self-propulsion, and high-velocity fluid flow.