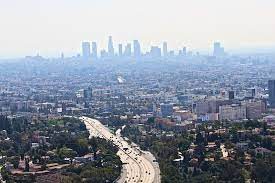 Smog obscures the Los Angeles skyline. The Los Angeles Department of Water and Power is to develop a long-term plan that will remove carbon-emitting sources from its power generation mix by 2035.

A Los Angeles City Council motion declaring that all of the city's electricity come from zero-carbon sources by 2035 will prompt the city-owned utility, the Los Angeles Department of Water and Power, to drastically remake its power generation portfolio.

The council on Sept. 1 by a 12-0 vote, with three members absent, adopted a motion by Councilmembers Paul Krekorian and Mitch O'Farrell that directs the utility, known as the LADWP, to develop a strategic long-term resource plan that includes a 100% fossil-free power generation portfolio by 2035.

The motion is based on a report, the "Los Angeles 100% Renewable Energy Study," known as LA100, completed in March by the U.S. National Renewable Energy Laboratory. Work on the study began in June 2017.

"The study's results show that a reliable, 100% renewable electricity supply is indeed achievable for LA by 2045 or even a decade sooner," the lab's director, Martin Keller, said in a foreword to the 12-chapter report.

"Our city has set a goal of 100% carbon-free energy by 2035 and we're here to tackle the challenge and say, 'LADWP is all in,'" the utility's chief engineer and general manager, Martin Adams, said in a Sept. 1 news release.

"[W]e're ready to take the next steps toward a 100% clean energy future. Most importantly, we will begin a study of how to achieve 100% clean power while ensuring equity of the projects, programs, and services that will be developed as we move forward on this path," Cynthia McClain-Hill, president of the city Board of Water and Power Commissioners, said in the news release.

According to S&P Global Market Intelligence data, the utility has more than 7,900 MW of currently operating owned and contracted generation capacity, with 43% comprised of gas-fired resources and another 10% contracted from a Utah coal plant. The portfolio includes more than 1,900 MW of hydroelectric capacity, though most of that comes from the little-used Castaic pumped storage facility. The LADWP also has a 9.66% ownership interest, equaling 387 MW, in the three-unit Palo Verde nuclear plant in Arizona.

After the Castaic plant, the next-largest resource in the LADWP's portfolio is 803 MW from the 1,800-MW coal-fired Intermountain plant in Utah. A total of 35 municipal and cooperative utilities, six, including the LADWP, in California and the remainder in Utah, purchase portions of the plant's output. By 2025, the plant is to be converted to run on natural gas with up to 30% hydrogen in its fuel mix, scaling up to 100% hydrogen by 2045.

In 2019, the city and LADWP announced plans to shut three of its large gas-fired plants to comply with state requirements to end the practice of using seawater for cooling. Two late 1950s-era units at the Scattergood plant are to be shut by the end of 2024, with two early 1960s units at the Haynes plant and the three-unit Harbor CC plant, operating since 1995, set to be shut by 2029. Prior to that, a previous plan to build new gas-fired plants with air cooling had already been put on hold.

The long-term resource plan required under the motion is where the LADWP is to schedule and plan for additional investments to meet the 100% clean energy goal. The motion directs the utility to include in its long-term plan "no regrets" investments in transmission infrastructure, energy storage, distributed energy and energy efficiency, along with rate structures that encourage electrification.

The utility already has a couple of power generation investments underway, including an expansion of its 20-MW Beacon Energy Storage System, and the 150-MW Pine Canyon Project wind facility, expected to be in operation by the end of 2022.