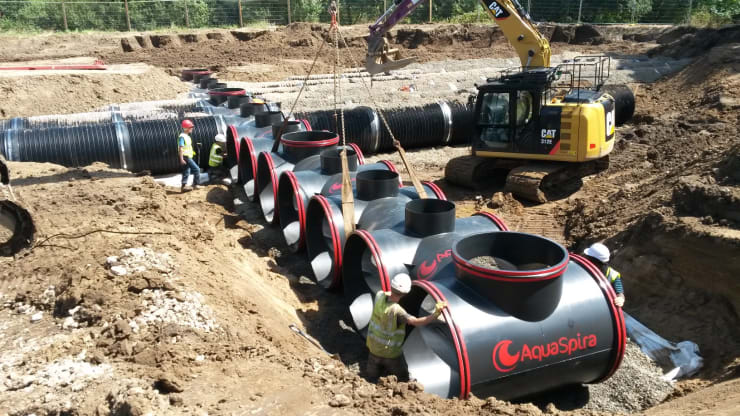 A range of interesting ideas and technologies are being developed to mitigate the construction sector’s environmental footprint.

The types of materials being used in major infrastructure projects are also changing.

A collaboration between academia and business in the U.K. is to work on the development of “low carbon smart pipes” that could be deployed in major infrastructure projects, in another example of how ideas and innovation focused on sustainability could change the construction sector.

In a statement issued November 9, the University of Birmingham said the program would be led by a firm called Aquaspira, which specializes in the production of large diameter drainage pipes. The idea is for the project to “support the development of composite plastic and steel drainage and storm water pipes” which incorporate “high levels of recycled material.”

In addition, sensors will be integrated into the piping. This tech will be used to “detect and report changes in environmental conditions”, which will in turn allow any problematic issues to be quickly identified and remedied.

A team from the University of Birmingham’s School of Engineering is set to work alongside Aquaspira on the development of the sensors. Testing will take place at the National UKCRIC Buried Infrastructure Facility, which is based at the university. The project has received funding from Innovate U.K. and is set to last nine months.

“Not only will the research deliver low-carbon drainage solutions for the construction industry but the new monitoring technologies will be vital for the long-term assessment of climate change impacts on our built environment,” Nigel Cassidy, professor of Geotechnical Infrastructure Engineering at the University of Birmingham, said in a statement.

As concerns about sustainability grow, a number of interesting ideas and technologies are being developed to try to mitigate the environmental footprint of the construction sector.

This includes the deployment of hydrogen fuel cells to provide heat and power to off-grid sites as well as the development of low and zero-emission pieces of machinery. The British firm JCB, for example, has produced an excavator that is powered by hydrogen as well as an electric mini excavator.

When it comes to the materials used to actually build structures, these include LafargeHolcim’s ECOPact, a concrete that comes in a number of iterations. Depending on which one is used, the company claims the product can have “30% to 100% less carbon emissions compared to standard (CEM I) concrete.”

In the U.K., the DB Group has developed Cemfree, which it describes as a “totally cement-free alternative to conventional concrete.”

To date, the material has been used in a number of settings, including part of the M25, a major freeway in the south of England.