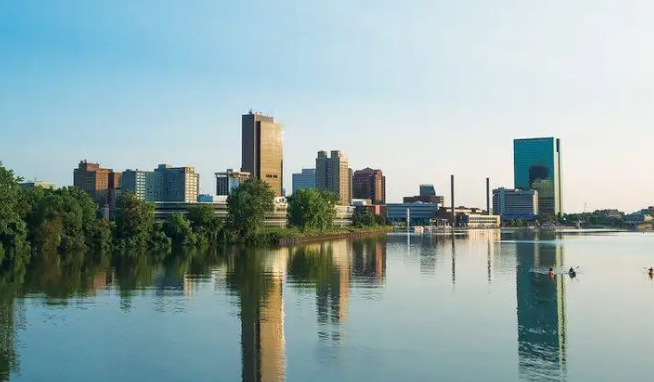 Geospatial technologies enable local governments to build virtual maps of their cities and counties for a wide range of applications, including economic development, roadway safety and improvements and managing storm water utilities. As a result, high-resolution lidar data and orthoimagery have become increasingly important. They are being integrated with geographic information systems (GIS) and machine learning capabilities to help governments improve efficiencies and solve problems.

Impervious surface mapping enables a city to update its equivalent residential unit (ERU) database, which is used to determine how much to charge customers for a storm water utility. In Toledo,Ohio, for example, single-family and residential duplex properties are considered one ERU and are charged a flat rate. Commercial and industrial properties in the city are charged the same rate, but the number of ERUs per commercial site may be higher based on the total amount of impervious surface, which includes pavement, rooftops, buildings and any surface that prevents the natural filtration of storm water into the earth.

Toledo’s storm water utility was created in 2000, and the original GIS data was compiled by interns. That GIS data was manually updated and edited over time, leading to human error and data inconsistencies. In 2015, Toledo contracted with Woolpert to acquire aerial imagery and lidar data to perform impervious surface mapping. Aerial imagery was collected in 2017 and the evaluation of that data began in February 2019.

“The goal of this project is to ensure fair, accurate and consistent billing for property owners,” Haslinger said. “The city previously only measured the impervious surfaces of non-residential customers and did not measure surfaces such as gravel or stone. This project will measure that data. I anticipate that this will lead to internal discussions on how the storm water rate is calculated and will give the city a better representation of the amount and types of impervious surfaces we have.”

The city of Toledo is spread out across approximately 80 square miles on the western edge of Lake Erie in Lucas County, Ohio. A busy port city with a population of about 273,000, Toledo is the fourth most populous city in Ohio. Toledo is bisected by the Maumee River, which empties into Lake Erie and is the city’s primary water source. There is significant commercial boat traffic through Toledo, which is considered the fifth busiest port city among the Great Lakes. It was once considered the glass capital of the world, earning the nickname “The Glass City,” and still maintains strong industrial roots.

Like many other medium-to-large cities, managing storm water runoff is both a priority and challenge for Toledo. The city maintains approximately 986 miles of storm sewers and 64 miles of drainage ditches. A highly developed city, Toledo features older neighborhoods with combined sewer areas and homes built near streams and filled-in natural floodplains. Haslinger said the area has seen a nearly 20% increase in rainfall in recent decades, and some homes are vulnerable to sewage backups in basements during large rain events.

“The storm water system is designed to only handle certain storm events, and intense storms will overload aging infrastructure,” Haslinger said. “More intense storms lead to greater runoff from impervious areas and therefore a greater chance of pollutants being carried into the storm system and receiving stream. Intense rainfall also leads to increased erosion of our stream banks and decreased water quality and habitat within the stream.”

In 2014, water quality became a very public concern in Toledo when a toxic algae bloom on Lake Erie led to a state of emergency. The city was forced to shut off water service to residents and businesses for three days as a safety precaution. Agricultural runoff is believed to be the primary cause of the algae growth, which is very visible and turns the water fluorescent green. Toledo is impacted by the runoff from its rural surroundings as well as urban runoff from its paved industrial and commercial sites.

In addition to measuring impervious surface areas, Haslinger said the maps provided by Woolpert can be used as an educational tool to help generate support for the city’s efforts in combating the environmental impacts of storm water runoff.