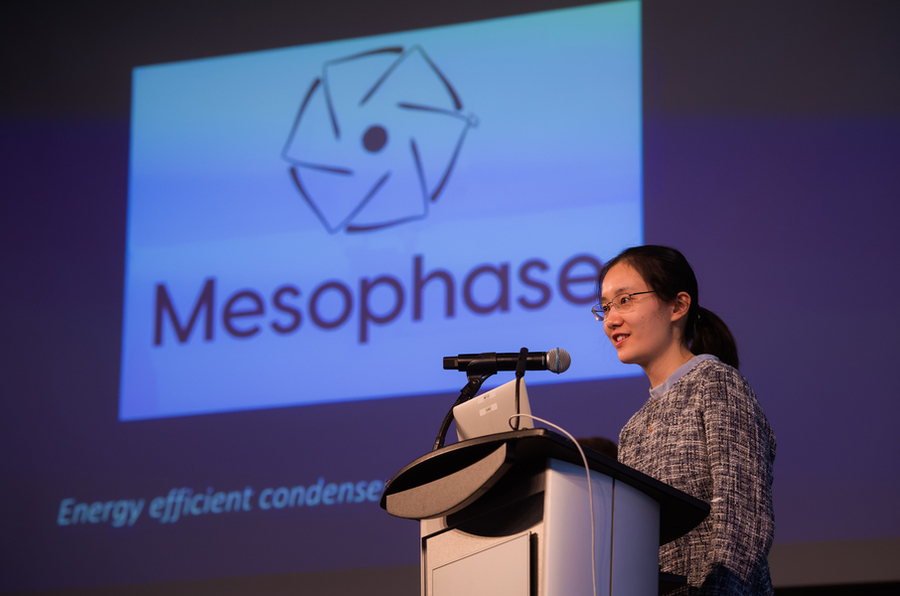 The winner of this year’s MIT Water Innovation Prize, Mesophase, has developed a surface coating designed to improve the efficiency of condensers used in power plants around the world. “When compared to what’s on the market, we believe you’ll see a record performance in terms of both heat transfer and lifetime,” says Yajing Zhao SM’18. 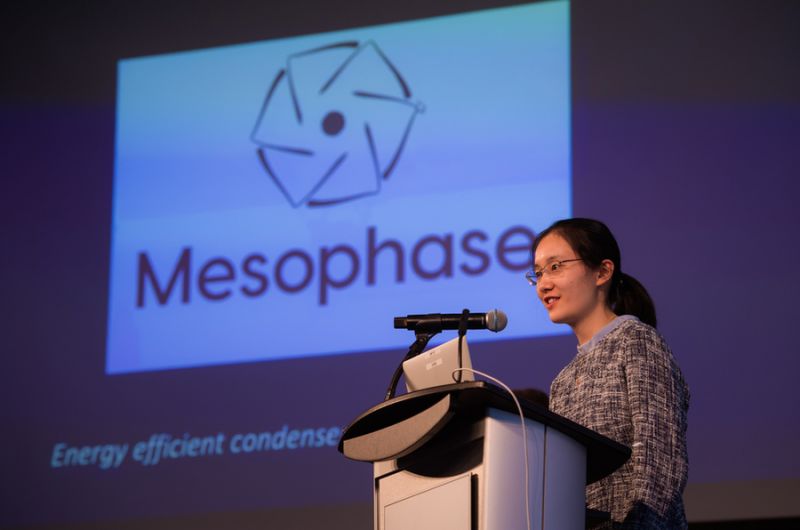 Credits:Photo: Gretchen Ertl
The winning team poses with the check
Caption:Michael Gangemi, left, and Yajing Zhao of Mesophase. In the wining pitch, the company said it believes its coating will improve the cost, performance, and durability of condensers.

The winner of this year’s Water Innovation Prize is a company commercializing a material that could dramatically improve the efficiency of power plants.

The company, Mesophase, is developing a more efficient power plant steam condenser that leverages a surface coating developed in the lab of Evelyn Wang, MIT’s Ford Professor of Engineering and the head of the Department of Mechanical Engineering. Such condensers, which convert steam into water, sit at the heart of the energy extraction process in most of the world’s power plants.

In the winning pitch, company founders said they believe their low-cost, durable coating will improve the heat transfer performance of such condensers.

“What makes us excited about this technology is that in the condenser field, this is the first time we’ve seen a coating that can last long enough for industrial applications and be made with a high potential to scale up,” said Yajing Zhao SM ’18, who is currently a PhD candidate in mechanical engineering at MIT. “When compared to what’s available in academia and industry, we believe you’ll see record performance in terms of both heat transfer and lifetime.”

In most power plants, condensers cool steam to turn it into water. The pressure change caused by that conversion creates a vacuum that pulls steam through a turbine. Mesophase’s patent-pending surface coating improves condensers’ ability to transfer heat, thus allowing operators to extract power more efficiently.

Based on lab tests, the company predicts it can increase power plant output by up to 7 percent using existing infrastructure. Because steam condensers are used around the world, this advance could help increase global electricity production by 500 terawatt hours per year, which is equivalent to the electricity supply for about 1 billion people.

The efficiency gains will also lead to less water use. Water sent from cooling towers is a common means of keeping condensers cool. The company estimates its system could reduce fresh water withdrawals by the equivalent of what is used by 50 million people per year.

After running pilots, the company believes the new material could be installed in power plants during the regularly scheduled maintenance that occurs every two to five years. The company is also planning to work with existing condenser manufacturers to get to market faster.

“This all works because a condenser with our technology in it has significantly more attractive economics than what you find in the market today,” says Mesophase’s Michael Gangemi, an MBA candidate at MIT’s Sloan School of Management.

The company plans to start in the U.S. geothermal space, where Mesophase estimates its technology is worth about $800 million a year.

“Much of the geothermal capacity in the U.S. was built in the ’50s and ’60s,” Gangemi said. “That means most of these plants are operating way below capacity, and they invest frequently in technology like ours just to maintain their power output.”

The company will use the prize money, in part, to begin testing in a real power plant environment.

“We are excited about these developments, but we know that they are only first steps as we move toward broader energy applications,” Gangemi said.

This year’s event, held in a virtual hybrid format in MIT’s Media Lab, included five finalist teams. The second-place $15,000 award was given to Livingwater Systems, which provides portable rainwater collection and filtration systems to displaced and off-grid communities.

The company’s product consists of a low-cost mesh that goes on roofs to collect the water and a collapsible storage unit that incorporates a sediment filter. The water becomes drinkable after applying chlorine tablets to the storage unit.

“Perhaps the single greatest attraction of our units is their elegance and simplicity,” Livingwater CEO Joshua Kao said in the company’s pitch. “Anyone can take advantage of their easy, do-it-yourself setup without any preexisting knowhow.”

The company says the system works on the pitched roofs used in many off-grid settlements, refugee camps, and slums. The entire unit fits inside a backpack.

The team also notes existing collection systems cost thousands of dollars, require expert installation, and can’t be attached to surfaces like tents. Livingwater is aiming to partner with nongovernmental organizations and nonprofit entities to sell its systems for $60 each, which would represent significant cost savings when compared to alternatives like busing water into settlements.

The company will be running a paid pilot with the World Food Program this fall.

“Support from MIT will be crucial for building the core team on the ground,” said Livingwater’s Gabriela Saade, a master’s student in public policy at the University of Chicago. “Let’s begin to realize a new era of water security in Latin America and across the globe.”

The third-place $10,000 prize went to Algeon Materials, which is creating sustainable and environmentally friendly bioplastics from kelp. Algeon also won the $5,000 audience choice award for its system, which doesn’t require water, fertilizer, or land to produce.

The other finalists were:

- Flowless , which uses artificial intelligence and an internet of things (IoT) platform to detect leaks and optimize water-related processes to reduce waste;
- Hydrologistics Africa Ltd, a platform to help consumers and utilities manage their water consumption; and
- Watabot, which is developing autonomous, artificial intelligence-powered systems to monitor harmful algae in real time and predict algae activity.

Each year the Water Innovation Prize, hosted by the MIT Water Club, awards up to $50,000 in grants to teams from around the world. This year’s program received over 50 applications. A group of 20 semifinalist teams spent one month working with mentors to refine their pitches and business plans, and the final field of finalists received another month of mentorship.