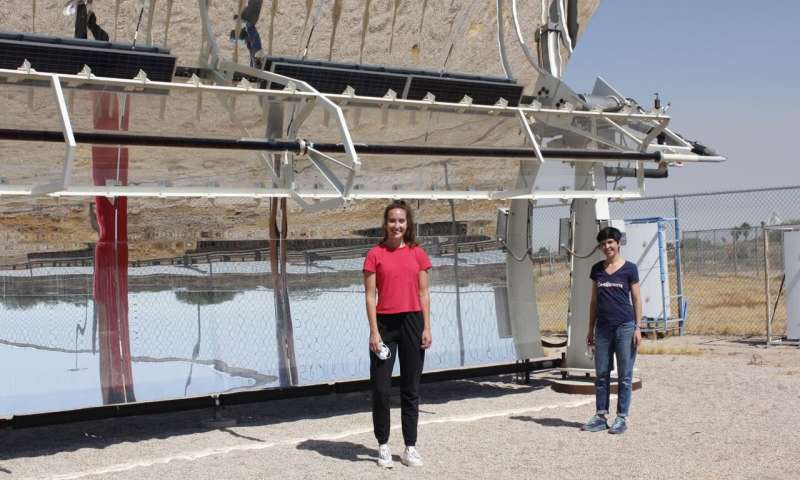 A team of University of Arizona engineers and scientists is developing a solar-powered desalination system that combines several types of technologies—including concentrated solar power, photovoltaics and membrane distillation—to recover water from these concentrated waste streams with maximum efficiency. The process uses less energy at a lower cost, and it could provide more water for resource-scarce inland regions such as Arizona. The work is funded by $500,000 from the Department of Energy's Rapid Advancement in Process Intensification Deployment manufacturing institute.

"The benefit of using both CSP (concentrated solar power) and PV (photovoltaics) is that we can double the energy efficiency compared to existing thermal desalination systems that just use PV or CSP," said Kerri Hickenbottom, assistant professor of chemical and environmental engineering and principal investigator for the project. "This off-grid system will use renewable energy resources to transform the way we manage high-salinity concentrate typically considered as waste streams."

Andrea Achilli, also an assistant professor of chemical and environmental engineering, and Robert Norwood, a professor in the James C. Wyant College of Optical Sciences, are also involved with the project. The project reflects the university's recent designation as No. 1 in the U.S. and No. 2 globally in the area of water resources in the 2020 Academic Ranking of World Universities.

The team is conducting research using the Optical Sciences Center solar testbed. They are also collaborating with the nearby Water and Energy Sustainable Technology Center, or WEST Center, which houses a reverse osmosis system overseen by Achilli. The system produces the concentrate stream the team will use for testing.

The hybrid solar desalination system purifies the concentrate stream using a process called membrane distillation, which involves creating a temperature gradient across a hydrophobic microporous membrane. The concentrated waste stream on the hotter side of the membrane evaporates at the membrane surface, vaporizes through the membrane pores and condenses as purified water on the cooler side of the membrane—leaving the contaminants behind. This specialized membrane is similar to Gore-Tex fabric, which allows sweat to evaporate through the fabric but doesn't allow water or other moisture in. Then, they'll use a novel method to turn the remaining waste stream from liquid to solid.

"We're actually developing a new kind of crystallizer design so we can increase the driving force across the membrane, recover additional resources in the concentrate stream like agricultural fertilizers and road deicers and achieve zero-liquid discharge," Hickenbottom said.

Even if the crystallized materials are not usable for other applications, solidifying them rather than keeping them in a liquid waste stream makes them easier and less expensive to transport.

Concentrated solar power and photovoltaics are both methods for generating electricity from solar energy, but their conversion pathways differ. Photovoltaics, which is the technology used in solar panels, converts the sun's light directly into electricity using semiconductor material. Concentrated solar power is a two-step process that involves concentrating the sun's heat, using mirrors, then converting that heat to electricity, using steam turbines or engines.

"You lose efficiency when you go from one form of energy to another, so using the solar energy to generate electricity and to heat the water directly is how we plan to be about twice as efficient as existing systems that just use PV or CSP," Hickenbottom said. "By using a method called CSP tracking to increase PV's electrical energy production, we can also reduce the overall system footprint and cost."

The researchers have submitted their technology for the American-Made Challenges Solar Desalination Prize, sponsored by the U.S. Department of Energy. The four-phase competition, which offers over $9 million in prizes, is designed to advance the development of solar-driven thermal desalination technologies.