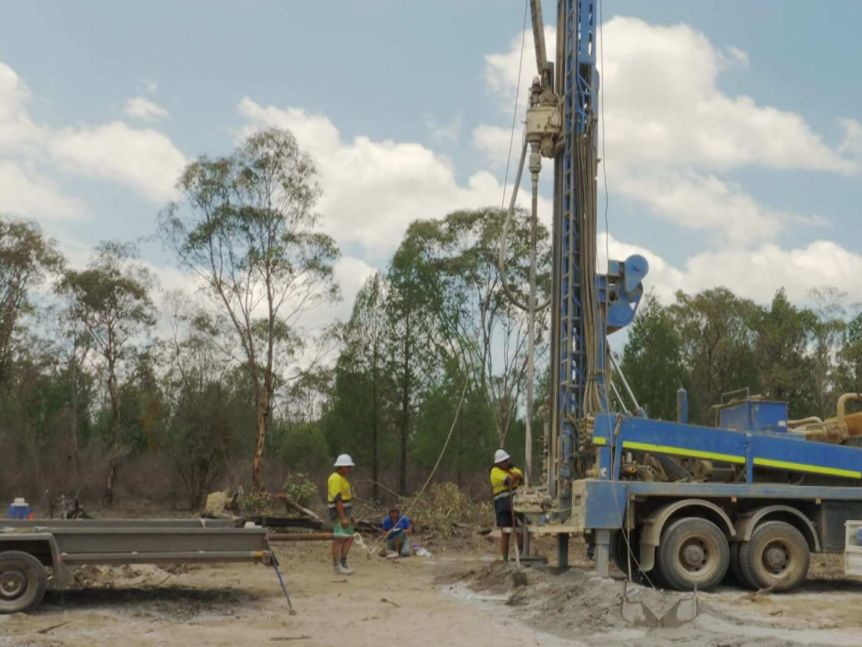 It is an anxious wait for a drought-fatigued Queensland farmer, watching on as a drill rig bores deep into the earth in search of invaluable underground water.

For every metre the drill goes down the bill goes up and there is no guarantee of success.

"Back in the last drought, only five years ago, we drilled seven wells then," said stone fruit grower, Angus Ferrier.

"Ultimately only one turned out to be commercial, so giving us water at a level that we can meaningfully use."

This latest shot at a more productive bore on the Granite Belt orchard is being backed and paid for by a company working to change the way we search for underground water all over Australia.

"There's a thousand bores a day being dug at the moment and half of them, in our view, are not sighted properly," said chief executive of Sustainable Water Solutions, Ross Martiensen.

"Too many farmers drill and hope and spend too much money on dry holes.

"We wanted to bring technology in to provide an insurance policy so that when they do spend that money they've got a much better chance of finding water."

The technology includes measures already in use by mining companies.

Water security is an ongoing struggle for the region. (ABC Landline)

It involves drilling far deeper than usual, which comes at a high cost, but the company is confident it can pay off.

"The initial technology that we're implementing is the ability to use remote sensing data and aerial mapping to find deep underground fractured water coming up under pressure," Mr Martiensen said.

"Most people in this area would only drill until they hit the granite and they're just catching water that has soaked through, through precipitation over the years.

"What we're looking for is the cracks and fractures and fissures in the rock system where water is coming up, so we'll go through the granite into those fractures and we're getting a new resource that's coming up from below the impermeable layer."

Since 2019, the Council has been carting water into Stanthorpe from dams in nearby Warwick.(ABC Landline)

Better than 'randomly picking a spot'

With the field narrowed to a few hundred metres they then carried out 'ground-truthing'; looking for natural indicators of underground water in the landscape.

"You see indicators in the rocks and the geology, also the trees and the plant life and even the insect life," Mr Martiensen said.

"We want the bookends of science — with the mapping and the seismic detection — but also everything in between," Mr Martiensen said.

"If we can take layers of risk off to get to certainty when we put the drill in the ground it's much better than just randomly picking a spot."

It proved successful on the first shot at Mr Ferrier's property, although the water they tapped into did not flow at the rate anticipated.

It was believed the pressure required to drill so deep into hard rock forced rock fragments back into the fracture, blocking the flow.

"History tells us that as you draw water through these deep fracture systems you clear up a lot of those blockages, so we should get back to that higher flow rate," Mr Martiensen said.

Even at the reduced flow, reliable underground water means a great deal for this drought-battered farm.

"As we stand here in mid-July, our orchard has not received anywhere near enough rain to break the drought, and a litre a second is very valuable — we can do a lot with that," Mr Ferrier said.