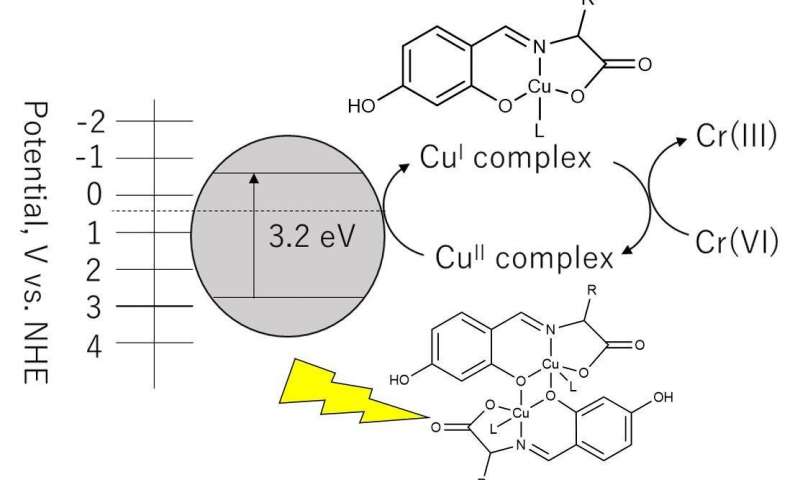 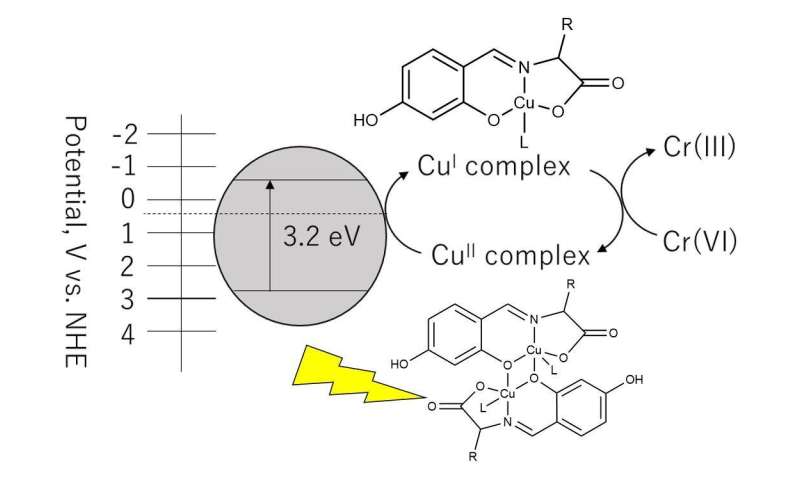 Chromium contamination in wastewater can be mitigated by converting Cr(VI) to Cr(III) through a photochemical reaction involving copper complexes. Credit: Takashiro Akitsu, Tokyo University of Science

The element chromium, despite having various applications, has a bad reputation. This is because exposure to chromium compounds leads to a higher risk of respiratory cancer and other damaging effects on human health. To add to this problem, chromium also happens to be a major contributor to water pollution due to its presence in industrial waste.

There is, however, a silver lining. As chemists have observed, the toxicity of chromium is dependent on its valence state (a state that is dictated by the number of electrons in the outer shell of an atom). Of the two stable states that chromium exhibits, hexavalent chromium or Cr(VI) and trivalent chromium Cr(III), the former is more toxic and soluble. Thus, chromium contamination can be mitigated by simply converting Cr(VI) to Cr(III) via a process called reduction. Unfortunately, most approaches involved in reducing Cr(VI) to Cr(III) are either expensive and hazardous or have high energy requirements.

To this end, researchers have been focusing on the development of photocatalysts, materials that can facilitate the reduction of harmful substances in the presence of light. The trick is to develop such a reaction using water as the solvent (as opposed to previously used organic solvents), such that they can be directly used to treat wastewater.

A team of researchers, led by Prof Takashiro Akitsu of Tokyo University of Science, has successfully done this, in a recent study published in  New Journal of Chemistry . The team also included Yoshito Miyagawa, Tomoyuki Haraguchi (Tokyo University of Science, Japan), Arshak Tsatsuryan (University of Turin, Italy, and Southern Federal University, Russia), and Igor Shcherbakov (Southern Federal University, Russia). Prof Akitsu explains, "In our study, we developed a method to reduce Cr(VI) via light irradiation. We then applied it to an aqueous solvent to make its application easier."

In their study, the team synthesized copper (Cu(II)) complexes from a range of organic compounds. Through further analyses, they confirmed that these complexes, along with a photocatalyst called titanium oxide (TiO2), are involved in a photochemical reaction leading to the reduction of Cr(VI) in both methanol and water. Specifically, the group studied how the photocatalytic activity of the Cu(II) complex in methanol depended on the wavelength of incident light, while that of the Cu(II) complex with TiO2 in aqueous solution depended on the pH of the solution.

The findings revealed that, on one hand, the rate of Cr(VI) reduction in Cu(II)-methanol photochemical reaction is maximum for visible light in the wavelength range 460-495 nm. On the other hand, Cr(VI) reduction by the Cu(II)-TiO2 system under UV light was found to depend on the pH level of the aqueous solution, exhibiting high reduction efficiencies for acidic solutions with pH values <6. Further electrochemical experiments showed that the photocatalysts were reusable, indicating their potential applicability in environment regulation.

The study holds promise for the development of a novel wastewater treatment procedure that is both cost-effective and efficient. As Prof Akitsu puts it, "This is the first study to show the reduction of the toxic Cr(VI) into the relatively harmless Cr(III) in an aqueous solvent, which has direct implications in reducing water contamination."

With such a technology in place, we can certainly hope to reverse the adverse effects of industrial wastes on water bodies.

Filtering out toxic chromium from water

Provided by Tokyo University of Science