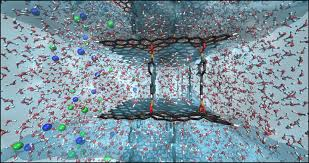 RUSSIAN SCIENTISTS FROM MOSCOW STATE University and the Kurchatov Institute, together with colleagues from Sweden and Germany, have increased the sorption properties of graphene by 15 times, improving its ability to remove radionuclides from water.

The development was carried out by an international group of specialists, who succeeded in synthesising and characterising graphene oxide with specified defects in the molecular structure. These features improve the sorption properties of the material by a factor of 15.

“We studied the mechanism of uranium sorption on graphene oxide to determine which method of its synthesis makes it possible to obtain the most effective material,” Aleksandr Trigub, a researcher at the Kurchatov Institute, told Russian newspaper Izvestia.

The compound was prepared from reduced graphene oxide, using a reaction known as the Hummers method. The authors modified this classical method for producing graphene oxide using an explosive thermal delamination process. As a result, defects appear in the graphene’s carbon structure, which ‘trap’ heavy metal cations (ie those with a positive electric charge).

In conventional graphene oxide, the carbon atoms are structured in flat (two dimensional) ‘sheet’ of connected hexagons, with the oxygen on the surfaces. In a ‘defective’ oxide like the one described above, oxygen acts on graphene in such a way that it creates many irregularities. The sorption of uranium cations occurs due to the fact that carboxyl groups are placed on the oxygen atoms located at the edge of the voids in the structure of defective graphene oxide. Active oxidation of graphene oxide increases the number of carboxyl groups, which increases its sorption properties.

The new material was developed specifically to increase the number of defects. Scientists have studied its structure in detail using powerful microscopes, x-rays and spectroscopic methods.

Two-dimensional carbon materials, which include graphene oxide, are increasingly used in industry. Now this topic is one of the most fast-developing in science, and researchers are looking for new applications of such materials, says Pavel Postnikov, associate professor at the Research School of Chemical and Biomedical Technologies of Tomsk Polytechnic University.

“Unlike graphene, which is expensive to produce, graphene oxide can be synthesised quite simply,” said Pavel Sorokin, a leading researcher from the Inorganic Nanomaterials Research Laboratory at Russia’s National University of Science and Technology (NUST MISIS).

The proposed method for obtaining the substance is easily scalable and can be applied for mass production of graphene oxide for water purification, said associate professor Anton Konakov, senior researcher at the Department of Theoretical Physics at the Faculty of Physics of Lobachevsky University.

The new work is a logical continuation of the authors’ works on the study of the sorption capacity of graphene oxide, in which a high sorption of ions containing radionuclides on edge carboxyl groups was found, said Vyacheslav Almyashev, associate professor of the Department of Physical Chemistry at the St Petersburg Electrotechnical University. “The researchers have developed a technology for creating highly defective graphene oxide to increase the number of sorbing centres, and their previous assumptions were confirmed,” he said.