Reimagining infrastructure in the United States: How to build better 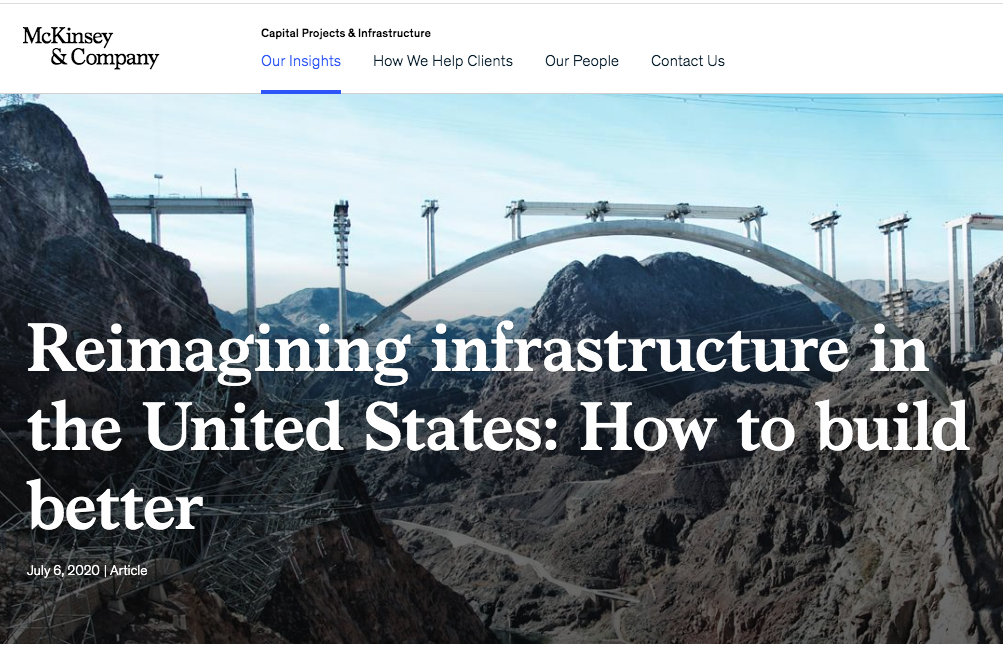 US infrastructure agencies  have kept the country’s trains running, water flowing, and government buildings functioning during the coronavirus crisis. Now that operations are stabilizing, they can reconsider their capital-expenditure plans. What that entails will vary dramatically depending on whether the federal government provides substantial infrastructure funding as part of an economic-stimulus package. If it does, agencies will need to determine how best to spend their share. And if there is no such funding, they will need to prepare to be more efficient with potentially lower budgets.

There is little doubt about the value of investing in good infrastructure. In 2015, the nonpartisan Congressional Budget Office estimated that every dollar spent on infrastructure brought an economic benefit of up to $2.20.1 The US Council of Economic Advisers has calculated that $1 billion of transportation-infrastructure investment supports 13,000 jobs for a year.2 Beyond the numbers, infrastructure is critical to the health and well-being of the country: the United States could not function without the roads, bridges, sewers, clean water, and airports previous generations paid for.

The need for more and better infrastructure is acute. A partial shutdown of the 111-year-old Hudson River rail tunnel in New York, for example, could cost the economy $16 billion and 33,000 jobs, according to the Regional Plan Association.3 In 2016, the American Society of Civil Engineers estimated that the United States had an unfunded infrastructure gap of more than $2 trillion (Exhibit 1).4 And that figure may now be an underestimate: public-infrastructure federal, state, and local spending was only 2.3 percent of GDP in 2017 (the latest year for which figures are available)—a record low. In 2019, the McKinsey Global Institute (MGI) estimated that fully closing the infrastructure gap could translate into 1.2 percent more jobs across the economy.

Infrastructure spending was a key part of the 2009 American Recovery and Reinvestment Act (ARRA). The legislation, passed in response to the financial crisis, gave priority to “shovel ready” projects—those that could be completed within three years. While that helped clear out maintenance backlogs (thus improving existing assets and extending their life spans), it did not greatly expand US capital stock or build the kind of projects that could durably strengthen economic competitiveness, as the interstate-highway system, the California State Water Project, and the Washington, DC, Metrorail system did. As Congress considers further infrastructure spending, it should seek to balance the short-term need to maintain employment and activity—the role of shovel-ready projects—with the large-scale ambition to build such transformative projects.

Congress has passed three separate relief packages, totaling more than $2 trillion, to address the economic consequences of the COVID-19 crisis. Despite significant allocations earmarked for transit agencies, airports, and Amtrak in the Coronavirus Aid, Relief, and Economic Security (CARES) Act,5 no funding has been specifically designated for capital projects. As it relates to funding for infrastructure agencies, legislation has focused on maintaining current staffing levels (although some local governments are asking for exemptions to use CARES Act funding for capital needs, despite US Department of the Treasury guidance to the contrary). By contrast, China, the European Union, and Japan have all announced stimulus programs in which infrastructure investment is a key component; like these markets, the United States could take advantage of low interest rates and available labor to rebuild and renew the nation’s physical assets.

The United States could take advantage of low interest rates and available labor to rebuild and renew the nation’s physical assets.

Depending on federal action, US infrastructure agencies will face one of two scenarios. In the first, federal stimulus materializes, which would bolster budgets and could unleash a rapid surge of capital deployment. In the second, there is little or no dedicated infrastructure-stimulus spending from the federal government. In that case, capital budgets would come under economic pressure, forcing a reevaluation of priorities.

In this article, we suggest how infrastructure agencies can reimagine their future—whether they get stimulus funding or have to do without. We also set out ways that they could respond in the near term to improve capital allocation in six specific areas: airports, mass transit, roads, water and wastewater, broadband, and publicly owned buildings.