Reweighing the Sustainability of DAMS 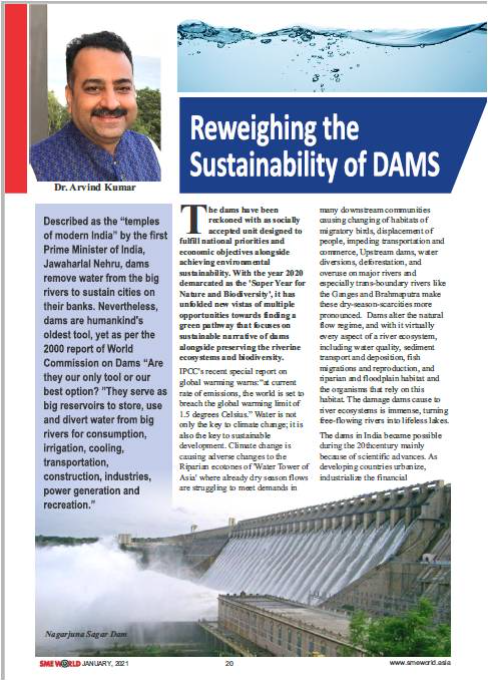 Described as the “temples of modern India” by the first Prime Minister of India, Jawaharlal Nehru, dams remove water from the big rivers to sustain cities on their banks. Nevertheless, dams are humankind's oldest tool, yet as per the 2000 report of World Commission on Dams “Are they our only tool or our best option? ”They serve as big reservoirs to store, use and divert water from big rivers for consumption, irrigation, cooling, transportation, construction, industries, power generation and recreation.”

The dams have been reckoned with as socially accepted unit designed to fulfill national priorities and economic objectives alongside achieving environmental sustainability. With the year 2020 demarcated as the 'Super Year for Nature and Biodiversity', it has unfolded new vistas of multiple opportunities towards finding a green pathway that focuses on sustainable narrative of dams alongside preserving the riverine ecosystems and biodiversity.

IPCC's recent special report on global warming warns:“at current rate of emissions, the world is set to breach the global warming limit of 1.5 degrees Celsius.” Water is not only the key to climate change; it is also the key to sustainable development. Climate change is causing adverse changes to the Riparian ecotones of 'Water Tower of Asia' where already dry season flows are struggling to meet demands in many downstream communities causing changing of habitats of migratory birds, displacement of people, impeding transportation and commerce, Upstream dams, water diversions, deforestation, and overuse on major rivers and especially trans-boundary rivers like the Ganges and Brahmaputra make these dry-season-scarcities more pronounced.  Dams alter the natural flow regime, and with it virtually every aspect of a river ecosystem, including water quality, sediment transport and deposition, fish migrations and reproduction, and riparian and floodplain habitat and the organisms that rely on this habitat. The damage dams cause to river ecosystems is immense, turning free-flowing rivers into lifeless lakes.

The dams in India became possible during the 20thcentury mainly because of scientific advances. As developing countries urbanize, industrialize the financial consequences of flood damage will increase, and the demand for flood protection will intensify, leading to the need to construct more dams. Indian cities are expected to add 440 million more people by 2050while atpresent, India's total installed capacity from hydropower projects is 45,699.22 MW. According to the Central Water Commission's data, as of June 2019, there are about 5,745 constructed/under construction large dams in India. Given that India has a population of 1.37 billion, and growing, Can India manage its water needs with its water availability of mere 1869 BCM?

Do Dams affect the sanctity of rivers?

Dams are not climate-neutral and particularly in the tropics, eutrophication emits greenhouse gas leading to increased Biological Oxygen Demand (BoD) levels, leading to global warming and eventually climate change. It is estimated that large water reservoirs account for 4% of all human-made climate change, equivalent to the climate impact of aviation and livestock. The floods and droughts caused by climate change in turn make dams less safe and less economic.

But Dams have a multi-faceted significance of their own. Dams were built to store water, irrigate crops, provide flood management, generate electricity, provide recreation or ease navigation. Dams generate 16% of the world's electricity and irrigate food crops for 12-15% of the world's population  and 80% of the water they store is used for hydropower. Dams can also have significant prospects to the surrounding community and society such as biological diversity, livelihoods and sustenance, source of community's cultural or spiritual life. Considering the case of India – having a unique riparian status, is the only regional country that falls in all three categories — upper, middle and lower riparian entailing a direct stake in all the important river basins of the region.

India is home to more than 5200 large dams and another 400 that are under construction having a total storage capacity of more than 300 billion cubic meters and as many as 92 per cent of dams in the country are situated in inter-state river basins.

The positive impact that reservoirs have on vegetation, has been studied by the Department of Earth Sciences, University of Roorkee, mentioning that reservoirs created due to construction of dams induced groundwater recharge and hence, is better for the supply of water for irrigation, which directly enhanced the growth of overall vegetation in the downstream areas. The construction of the irrigation canals, along with the construction of reservoirs, also directly provided a better water supply for agricultural purposes and indirectly also recharged groundwater regime.

India is the third largest dam owning country after China and USA. There are around 5,745 reservoirs in the country of which 293 are more than 100 years old. The age of 25% of dams is between 50 to 100 years and 80% are over 25 years old. In 2014, Chile cancelled five dams in the Patagonia region under strong public pressure and approved 700 megawatts of new solar and wind farms. According to report by American Rivers & International Rivers Network, the consensus among river ecologists is that dams are the single greatest cause of the decline of river ecosystems. While other experts opine that relocating communities out of the floodplain is not always feasible, but strategic use of alternatives such as setting back levees, restoring river meanders and flood proofing can reduce flood risk or protect against flood damage. In the United States, roughly 900 dams were removed between 1990 and 2015, with another 50 to 60 more every year and have spent over $49 million on enhancing their regulatory programs with respect to dam's safety. Given a better scenario, Africa shows the way with 90 percent of water in Africa falling within 63 international river basin catchments crossed by multiple borders, water management in the region is inherently an international and cooperative endeavor.

The subject of sustainability of development has been extensively debated over the last two decades. Sustainability has become the cornerstone for development effort since Agenda 21 was adopted at the Rio Conference in 1992. Post-COP 21, the increased use of renewable energies is a necessity, reinforced by the Paris Agreement. The most economical of all renewable energies is hydroelectricity: it is competitive without costly subsidies, and without posing problems of storage or intermittent supply for electricity network operators.Dams as storage reservoirs provide insurance against uncertainty due to climatic variability, aid reduction of variability in season's lean flows in rivers and basically save societies from socio-economic upheavals and losses due to flood or drought.

Today, there are multi-faceted options for generating electricity but limited options to generate water as a resource and preserve its natural capital. Employment opportunities have been generated, reducing poverty and migration of rural unemployed population, a key priority for the country since independence. When dams are well managed, their net benefits are strongly positive. However, it is important to remember that replacing something such as a large water supply dam may require implementing a number of environmentally-sustainable alternatives to “make up the difference.” Suggesting natural solutions to handle the water crisis, the UN World Water Development Report, 2018, rightly lays emphasis on the importance of "nature-based solutions" to meet the crisis and calls for ancestral and indigenous solutions. The Nam Theun project, a dam in Laos that supplies power to Thailand is a stark example of a successful project: creating local wealth while preserving natural resources, providing access to water, and regulating the course of the river while reducing greenhouse gas emissions alongside an?exemplary program been put in place to resettle local communities.

Integration of Choices: An imperative

In Meghalaya, a North-East state of India, small multipurpose reservoirs were constructed to meet the various water use requirements such as upstream reservoir could be used for water supply for drinking and irrigation purposes and downstream reservoirs for fish farming. The creation of multipurpose reservoirs, micro-hydel projects have enhanced the water use efficiency by making the water available throughout the year thereby allowing use of improved irrigation methods. Also, by using the same water for different purposes in a cascading manner; for example, water, micro-hydel projects have been used to meet power requirements of state, irrigation purposes and so on. Given the relevance of dams in contemporary times, sustainable alternatives must show the way forward.

Perhaps most importantly, countries need to assess the potential impacts of climate change on rainfall and on the performance of flood-related infrastructure and begin planning for the necessary adaptation to the changing climate to tackle its dam related management. As communities face increasingly stressed water supplies, decision-makers must continue to seek out sustainable water sources and methods of use that can meet both human and environmental needs. If development plans, especially those of erecting new dams or increasing the existing height of the dams, are undertaken by thoroughly reviewing pros and cons of such contemplated moves, along with putting in place adequate mechanism to redress the grievances of the affected people, then such moves can prove a boon and neglect of one or some related aspects can turn the same into a bane. While working on the maxim of “benefits for the majority not at the expense of loss to minority; but equitable sharing of benefits and loss for all”, all development plans can yield desired results for the benefit of all segments of the society. Besides, ecological science can inform equitable distribution of river-dependent benefits toward achieving social-ecological sustainability in complex and contested river ecosystems.