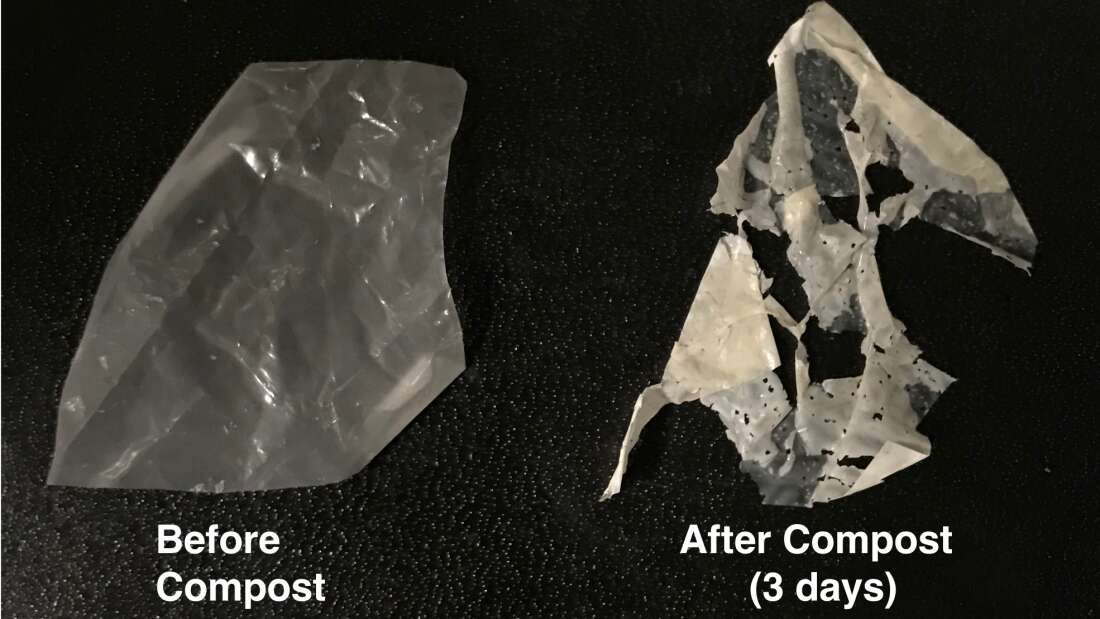 THE PROCESSED PLASTIC BEFORE AND AFTER JUST THREE DAYS OF COMPOST.

Curbing plastic pollution is one of the crucial environmental challenges that humanity is facing. Over the last several years, more focus has been given to compostable and biodegradable plastics but these require specific processes to break down. Researchers have now announced a new approach to plastic that can almost completely biodegrade under conditions that can be much more easily achieved.

Reporting in Nature, scientists have embedded special molecules in plastic made of polylactic acid, or PLA, and polycaprolactone, or PCL. These are already commonly used in compostable plastic. The special molecules used are enzymes that have the ability to degrade the plastic and turn it into lactic acid (which can feed microbes in the soil) when the right conditions are met.

The enzymes are enveloped in polymers and then placed inside the plastic fibers. They did not change the fabric of the material, which can be employed as a normal polyester plastic. The magic happens when the plastic is exposed to both water and heat.

Under industrial composting conditions, the team's special PLA degraded within six days at 50°C (122°F). For the PCL, being around 40°C (104°F) for two days was enough to do the trick. As it currently stands, this method can biodegrade up to 98 percent of the plastic into small molecules and, importantly, doesn’t leave behind any microplastics.

"People are now prepared to move into biodegradable polymers for single-use plastics, but if it turns out that it creates more problems than it's worth, then the policy might revert back," senior author Professor Ting Xu said in a statement. "We are basically saying that we are on the right track. We can solve this continuing problem of single-use plastics not being biodegradable."

The team also verified that the modified polyester doesn’t degrade at low temperatures or during brief periods of dampness. That means that you could have a shirt made of this material and it won't be affected by washing on a cool temperature or sweat. They actually kept some plastic at room temperature for three months without degradation.

Slightly warmer water did begin the process. This is not a drawback, however. It means a water-based compost approach for domestic composts.

"It turns out that composting is not enough – people want to compost in their home without getting their hands dirty, they want to compost in water," Xu added. "So, that is what we tried to see. We used warm tap water. Just warm it up to the right temperature, then put it in, and we see in a few days it disappears."

Xu and her team are now investigating applying this method to other types of plastics as well as having more control on the level of biodegradability so that the plastic can partly biodegrade and the rest can be recycled into new plastic.

"It is good for millennials to think about this and start a conversation that will change the way we interface with Earth," Xu said. "Look at all the wasted stuff we throw away: clothing, shoes, electronics like cellphones and computers. We are taking things from the Earth at a faster rate than we can return them. Don't go back to Earth to mine for these materials, but mine whatever you have, and then convert it to something else."