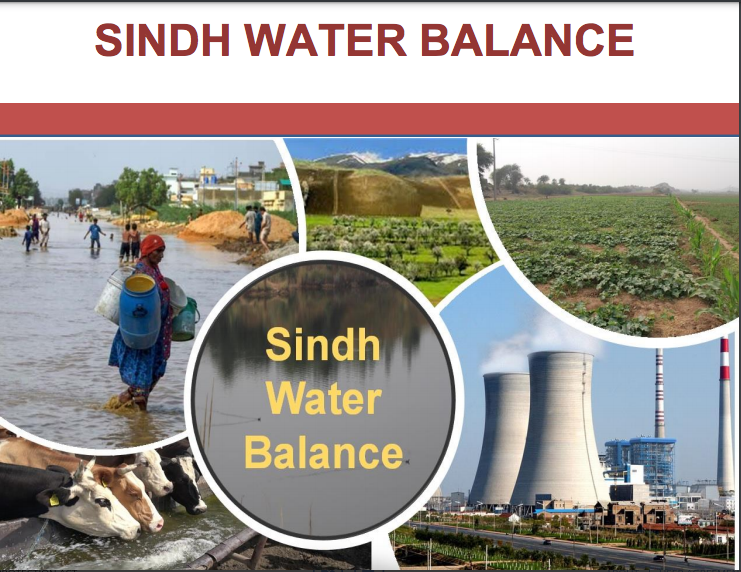 This study was conducted by the US Pakistan Center for Advanced Studies in Water (USPCASW) in collaboration with the Sindh Water Sector Improvement Project (WSIP), Pakistan.  The purpose of this study was to assess the water resources of Sindh using secondary data and give policy recommendations that will help in efficiently managing the municipal, industrial, irrigation/agriculture, and environmental needs. The goal of this study is to have policy reforms in the Sindh water sector for sustainable and equitable water distribution among various users. The key findings of the study, including satellite-based crop water use, provide mathematically sound data essential for developing knowledge-based policies and recommendations for efficient water use to manage available water resources.

Reports of previous studies were consulted to comprehend the current state of water resources in the province. Information regarding water availability from different sources and use by various stakeholders was summarized in this report. For annual and seasonal ( Kharif and Rabi ) river flow availability and variability, 21 years of historical flows (1998-1999 to 2018-2019) were analyzed and presented using time-series inflow data. Based on annual inflows at the Guddu Barrage, three flow scenarios—minimum (2001-2002), maximum (2010-2011), and average (2017-2018)—were developed considering them to be the representative of dry, wet, and average years’ weather conditions, respectively. The annual runoff (based on a 21-year record) has an average of 65.19 MAF, with 70-85 % of flows occurring in the Kharif season. During the Kharif season, the water availability was found to be sufficient, but conveyance losses were also more. The losses were calculated by comparing the quantum of water at upstream and downstream ends of a reach during a particular season. Besides high flows during the Kharif season, the canal withdrawals need to be checked and managed to ensure the availability of water at the farm levels.  The conveyance losses in the Sukkur-Kotri reach during the study period were found to be more (1.3 times) than in the Guddu-Sukkur reach, which need to be managed since they may cause shortfalls in the environmental flows down the Kotri barrage especially during the low flow periods.

For crop water use and requirement, a more precise assessment was carried out for the 2017-2019 period using high-resolution time-series satellite images, water inflows, and weather data for major crops at canal command levels.  Literature-based water demand estimates indicated 93-95%, 2%–3%, 2% utilization in agriculture, domestic, and industrial use, respectively, whereas, water requirement for ecology and environmental flows was unaccounted for. However, our analysis for the recent year (2018-2019) estimated lower consumption by all types of vegetation grown in the area—around 80% of the total water available at the canal command level, including canal diversions and total precipitation. The remaining amount may presumably be lost during the delivery to the farms or at the farm level.

The consumptive water use of the Rohri canal (originating from Sukkur Barrage) command area was found to be more than the authorized flows.  In addition to the authorized flows, 2.49 MAF water was consumed to fulfill the agricultural demand under current cropping patterns and intensities.  As advocated in the national water policy, the current water productivity and means to further raise it needs to be investigated to address this gap. The Kalri Baghar (KB) Feeder canal (Kotri Barrage) had maximum surplus water, i.e. 1.0 MAF more than the agricultural and municipal demands, during all three growing seasons of Rabi 2017-2018, Kharif 2018, and Rabi 2018-2019. The inflows and outflows of the Beghari canal (Guddu Barrage) CCA were balanced well where only 0.07 MAF inflows remained as surplus.Water management and planning is needed for balanced flows to meet the consumptive water demands of all 14 canals culturable command areas (CCAs) by redistributing water between and within CCAs.  Within CCAs, head-tail inequities are a significant issue.

Sindh water balance study for an average water year (2018-2019) revealed consumptions of 33.8 MAF, 1.19 MAF, 0.45 MAF, and 0.22 MAF by agriculture, domestic users, industries, and livestock, respectively. Down Kotri water availability was 1.76 MAF. The conveyance losses along the river reaches were 6.69 MAF, whereas, a considerable amount of 5.69 MAF was attributed to unaccounted losses.

The domestic water demand in 2050 will rise to 2.66 MAF, with urban need almost three times the rural demand. Projected water demands for crops are not easy to ascertain. There is a need for decision-makers to come up with the most preferred policy environment to improve incomes to farmers, raise productivity, etc. All within the boundaries of what are key physical limits to growth: available land and available water (including water that may be somewhat reclaimed through conservation measures; i.e., reducing losses). Reliable projections regarding industrial water use were not available, and therefore, the future industrial need could not be precisely estimated.

Many studies have predicted a shortfall of water by 32% in 2025 in the Indus River (Qureshi, 2011). This shortage causing food insecurity and other water-related issues in the country will affect the Sindh province more due to its location at the river’s tail end.  Population rise, rapid urbanization, poor socio-economic conditions, ineffective water management, and climate change will increase pressure on the available water resources (Planning Commission Report, 2013). The rising population will demand more food, but at the same time, agricultural water share will be under pressure due to the rising demand of other competing users. To combat this situation, there is an urgent need to adopt integrated water resource management (IWRM) as a basis for decision-makers to make informed political decisions by recognizing all the competing uses. Since agriculture is the largest user of water among all sectors, effective water management in this sector will have the most significant impact.

Based on the review of literature, secondary data analysis, and satellite data-derived information, three categories of actions are identified— 1) planning, research and development actions, 2) corrective actions, and 3) preventive actions. The recommendations presented under these categories will form the basis for discussions to develop policy reforms for the water sector.