Solving the mysteries of water and air underground 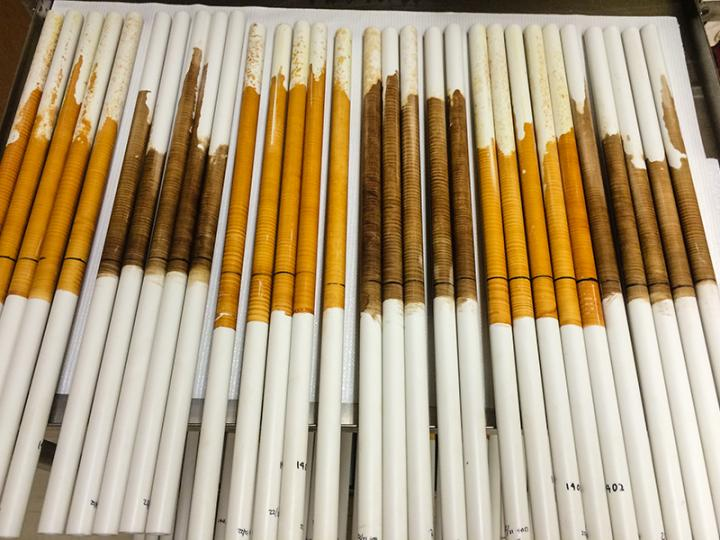 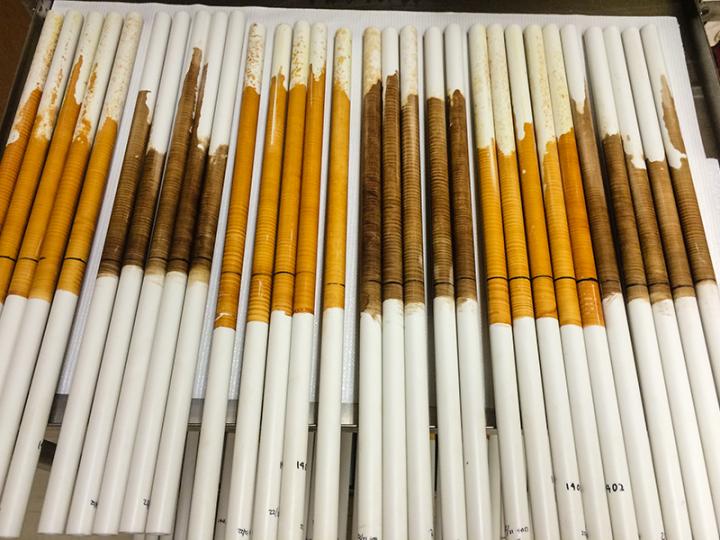 IMAGE:  PVC pipes painted with rust, known as IRIS tubes, help track how much oxygen is in the soil. When there isn't enough oxygen, microbes will turn the rust into regular iron, which washes away. These tubes are drying after being extracted from the experiments and rinsed. CREDIT: J.C. FIOLA

Stand outside and look underneath your feet. There, perhaps under some grass, is the soil. On a dry day, all the spaces in the soil are filled with air. And some distance further down, those spaces are entirely water. So, what's in between?

That's the capillary fringe. And it might just be the most important -- and mysterious -- thing you've never heard of.

Like a paper towel wicking up water from a surface, water rises above its natural level in soils through capillary action. A lot of chemical and microbial activity in the soil varies based on how much water or air is around. So, the capillary fringe controls many important functions in the soil.

"Important processes like contaminant breakdown and carbon storage depend on the amount of water and oxygen available," says Jaclyn Fiola, now a graduate student at Virginia Tech. "Understanding the conditions in the capillary fringe will help us predict where certain soil processes will occur."

Fiola and her team set out to better understand this strange region. But that's no easy feat. With the entire fringe underground, it's invisible. And even scientists have a hard time agreeing on where the fringe begins and ends. That's where lab experiments come in handy.

The team gathered two kinds of soil, one sandy and one loamy. The scientists packed this soil into five-gallon buckets with holes near the bottom to allow water to enter.

To track the key events in the capillary fringe, Fiola turned to cleverly simple systems. To study how much oxygen was in the soil, the researchers painted PVC pipes with rust-embedded paint. They inserted these pipes into the soil.

Wherever there wasn't enough oxygen, microbes would "breathe" rust instead. That would turn the rust into a different form of iron, which washes away. By measuring how much rust was left, the team could get a glimpse beneath the soil.

The researchers were surprised to find that the water rose the entire height of the buckets in both types of soils. That means the capillary fringe extended at least 9 inches, more than they were expecting.

Wetlands are defined by the government as soils that are saturated near the surface. But if soils act like they're saturated even above the water table, that means more areas might act like wetlands and deserve protection.

Scientists also wanted to better understand how water and air in the capillary fringe can affect other soil processes. To track decomposition, they inserted wooden sticks into the soil. Researchers found that microbes eating the wooden sticks were finnicky.

"Our results suggest that the microbes that carry out decomposition require ideal conditions - not too wet and not too dry," says Fiola. The wood was most eaten away in the middle of the buckets where it was moist.

"The capillary fringe is far too complicated to define based on one single measurement," says Fiola. Even though her team measured many different aspects of the fringe, those measurements didn't always agree with one another.

Soils are complex, especially outside of the lab. So now the researchers are planning to study the capillary fringe in more realistic conditions and in the field.

That future work might give us a better understanding of -- and appreciation for -- the fuzzy, complex, and vital in-between spaces beneath our feet.

Read more about this work in  Soil Science Society of America Journal . This research was funded by the Department of Environmental Science & Technology of the University of Maryland.