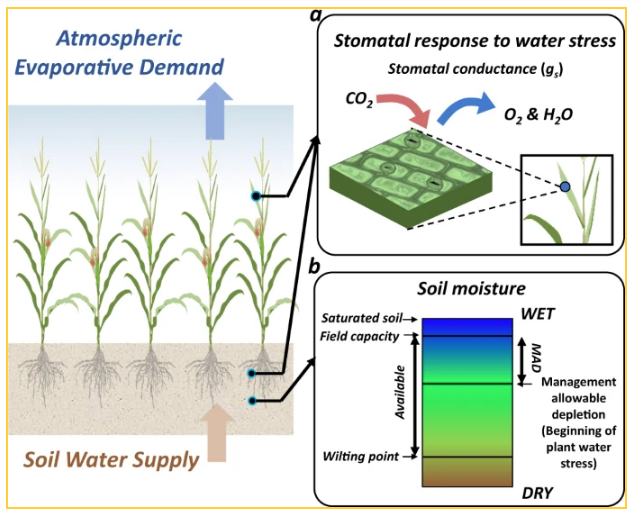 Irrigated agriculture accounts for ~72% of the total water withdrawals from surface water and groundwater globally, while contributing 40% of total food production1,2,3. At the same time, agricultural irrigation has led to severe water scarcity issues at regional to global scales due to the expansion of irrigated areas and increase of irrigation amount4,5. For example, the U.S. used an estimated 162.8 km3 of water to irrigate 25.7 million ha in 2015, accounting for 42% of total freshwater withdrawals6. Increasing areas of croplands with intensified irrigation have caused groundwater depletion in High Plains, Central Valley, and Mississippi Embayment aquifers in the U.S., which highlights the urgency of more sustainable water use for irrigation, especially, under climate change7,8,9.

Understanding plant water relations10 is the prerequisite for sustainable water use for irrigation (Fig. 1). Plant growth is regulated by the balance of water supply and demand in the soil-plant-atmosphere-continuum (SPAC). Water supply is represented by available water in the soil for plant uptake, while water demand is controlled by atmospheric aridity that passively drives water to move from plants into the atmosphere11,12,13. The atmospheric aridity is quantified by vapor pressure deficit (VPD), i.e., the difference between the saturated and actual vapor pressures at a given air temperature. Current irrigation practices have primarily focused on the soil water supply side, though we acknowledge that to calculate soil water balance to get soil moisture, evapotranspiration (ET) based on different methods is usually used in most methods14. Here we argue that the plant-centric irrigation schemes are crucial for sustainable irrigation based on the interplay between soil water supply and atmospheric evaporative demand via plant physiological regulations15 (i.e., plant hydraulics and stomatal response). 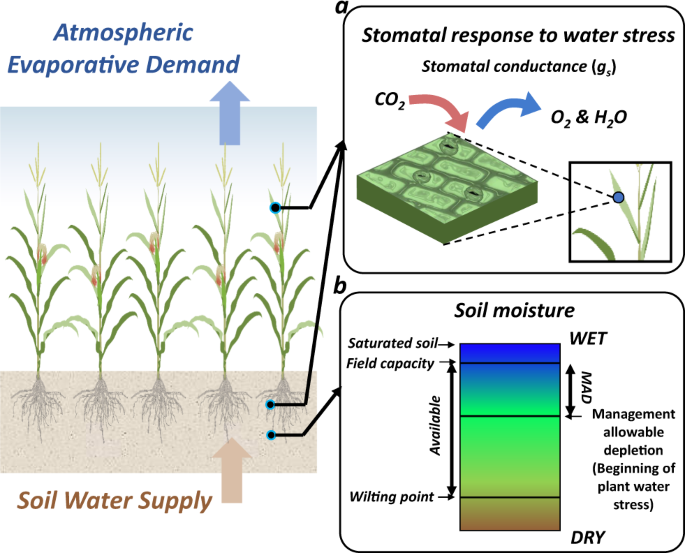 Soil water deficit and high VPD both can reduce terrestrial ecosystem productivity16,17,18,19,20,21,22,23. In the SPAC, low soil moisture and high VPD can lead to plant water stress which drives plants to close their stomata to prevent excessive water loss11,12,18,23,24,25 (Fig. 1a). At the same time, reduced stomatal conductance, reflecting the physiological regulation of the uptake of atmospheric carbon dioxide for photosynthesis, and water loss through transpiration11,20,26,27 also limits carbon assimilation and increases the risks of crop yield loss13. A long-term increasing trend of VPD16,28 and high probability of concurrent soil water deficit with atmospheric aridity21,29 have been projected globally under the climate change, further underscoring the need of including the physiological impact of high VPD in irrigation management.

The co-regulation of soil moisture and VPD on stomatal conductance