The battle over fish farming in the open ocean heats up, as EPA OKs permit 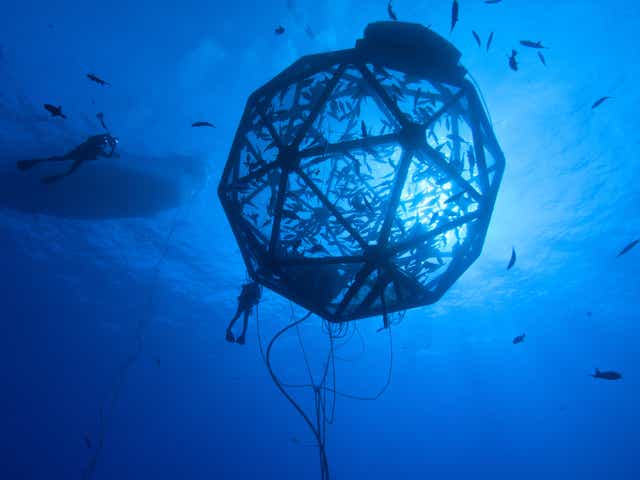 A diver approaches a demonstration of a commercial fishing net pen by Ocean Era in Kona, Hawaii. The company has received a federal permit to conduct a demonstration of the technology in the Gulf of Mexico about 45 miles southwest of Sarasota.

The Environmental Protection Agency has authorized a permit to discharge 80,000 pounds of fish waste into the Gulf of Mexico from the first finfish farm ever authorized in federal waters, a key hurdle in making American offshore aquaculture a reality.

“This project hopes to demonstrate to the Florida fishing and boating community that offshore aquaculture – when done properly – will be something that they can embrace,” said Neil Anthony Sims, a marine biologist and CEO of Ocean Era.

The project – dubbed Velella Epsilon – is still awaiting a construction permit from the U.S. Army Corps of Engineers before it can proceed.

The EPA’s discharge permit comes at a key moment for an aquaculture industry that has long looked to expand.

It also comes just a week after U.S. Sen. Marco Rubio co-sponsored a bill that would open the Gulf and other federal waters to offshore fish farming, a controversial idea backed by President Donald Trump’s administration.

However, opponents say offshore fish farms will create pollution in the form of fish waste, spread diseases to wild fish populations and increase competition with fishing companies that depend on wild catches.

The EPA’s assessment has indicated that there would be no significant environmental impacts associated with Ocean Era's project – the only offshore fish farm proposed in the Gulf to date.

Demonstrators against a proposed offshore fish farm at the corner of Ken Thompson Parkway and John Ringling Parkway in January. THOMAS BENDER/HERALD-TRIBUNE

Still, environmental groups were quick to criticize the EPA’s assessment and have made strong indications that they will challenge the federal agency’s decision.

“The EPA has not adequately addressed concerns about impacts to human health, the environment and imperiled wildlife,” said Jaclyn Lopez, the Florida director at the Center for Biological Diversity. “We are also concerned about this project’s influence on red tide and Ocean Era’s ability to maintain the security of its fish farm during a severe storm.”

The Velella Epsilon project would rear up 88,000 pounds of almaco jack in public waters off the coast of Sarasota for up to 12 to 18 months.

Almaco jack is native and common to the Gulf. The fingerlings will be sourced from brood stock that are located at Mote Marine Aquaculture Research Park and were caught in the Gulf near Madeira Beach in Pinellas County.

The actual demonstration pen where the farmed fish will be held will measure 20 feet deep and 50 feet across. It is able to be submerged about 20 feet.

The copper mesh cage to be used is impact-resistant and designed to survive storm events while submerged. The EPA believes that the cage design will make it unlikely that fish will escape.

Issues of structural integrity and anchoring of the cage system pertain to the Army Corps permit application. The structural permit authorization will include permit conditions to ensure the facility is being operated and maintained to mitigate environmental impacts during any disaster.

The day the EPA issued the permit, residents and environmental activists testified online as part of two 90-minute public meetings. During the hearings, much of the concern also centered on this and future fish farms potentially exacerbating the harmful algal blooms such as red tide that have impacted the state’s coastal economy in recent years.

Sims told the Herald-Tribune when asked about those concerns that the small cohort of fish required for this project is about 1% of the amount that would be grown offshore at a commercial farm.

Sims also noted that the United Nations High Level Panel on the Oceans and Climate Change recommended that humanity needs to start to transition to more marine-based agricultural systems.

“The Conservation International and The Nature Conservancy are all aligned with the need for expanding responsible aquaculture production in the ocean,” Sims said.

“I am not surprised but very disappointed that the EPA has approved the permit,” said Marianne Cufone, an environmental attorney and executive director of Recirculating Farms, one of the groups that is considering challenging the EPA’s assessment. “The EPA is tasked with environmental oversight, and this is them failing to do their job.”

This did not, Cufone said. The only alternatives were to issue or not to issue the permit.

The EPA’s assessment noted Florida’s red tides and acknowledged that excess nutrients from fish farms can promote growth, but says “(the) permit is being issued with conditions to monitor the discharge and protect water quality.”

The EPA also believes that a single cage demonstration project will not contribute significantly to nutrient availability, red tides or other environmental impacts to Gulf currents.

Cufone said that isn’t enough to keep pollution from the pen at bay.

“It’s well accepted that delusion is not the solution to pollution,” Cufone said. “It all goes somewhere, whether on Sarasota beaches or somewhere else. We’re talking about fish eating, excreting and growing in one cage.”