The IBDLP in the state of Meghalaya envisaged rejuvenating the local water capacity & empowering .. 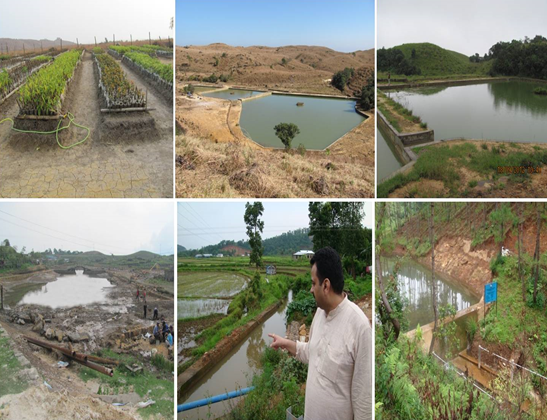 The Integrated Basin Development and Livelihood Promotion (IBDLP) Programme was launched by the Government of Meghalaya as its flagship programme in 2012 to create a institutional ecosystem for ecologically sustainable and inclusive development in Meghalaya. It aimed to put Meghalaya on higher growth trajectory. It seeked to redefine the relationship between the citizen and state and bring a paradigm shift by moving towards a demand driven partnership model of development. It was not prescriptive but created space for the choices regarding planning and implementation of by the people. IBDLP focused on building an inclusive framework which was sustainable and people-centered.

Objective of the practice

Meghalaya is rich in important minerals such as coal, limestone and has large forest cover, rich biodiversity and numerous water bodies. However, despite such natural abundance, almost half the population of the state lives below poverty line (BPL).
IBDLP’s primary objective was to ensure 11% growth during 2012-2017 through an inclusive and sustainable entrepreneur-led model implemented in convergence mode. The programme also seeked to promote knowledge-centric development through capacity building, particularly in natural resource management and entrepreneurship. It also promoted the creation of the required physical infrastructure in a convergent and participatory manner and set up efficient, adaptive and responsive governance systems for facilitating the process.

Implementation of the Project/Activity

The IBDLP is a unique programme that involved every department in the Government of Meghalaya. To ensure unity of purpose and convergence, the programme was steered by the MBDC. The programme had identified nine sectors for entrepreneur-led development. These were i) apiculture; ii) aquaculture; iii) forestry and plantation crops; iv) horticulture; v) livestock; vi) rural energy; vii) sericulture; viii) tourism; and ix) water. These nine focus sectors are approached in a mission mode, with specified, precise targets to be achieved within specified deadlines. Mission Green Meghalaya is another mission with its primary focus is on environment conservation. These nine missions, while dealing with different sectors, nevertheless had certain common, cross-cutting requirements. To address these, a series of ‘accompanying measures’ were devised and formed another major component of the programme which includes financial inclusion, market access and climate change adaptation.

Recognising the need for addressing the common requirements of the nine sectors, the IBDLP implementation was based on four pillars of knowledge management, natural resource management, entrepreneurship development and good governance, with convergence as the underlying strategy. The rationale behind a convergent strategy was two-fold – optimizing resources by harnessing departmental synergies and improving planning and implementation. Under Mission Green Meghalaya, which aimed to rejuvenate the environment and stop further environmental degradation, a cadre of community-selected volunteers has been created at village and micro watershed levels to generate awareness of Natural Resource Management (NRM) and resource conservation.