This New Fish-Friendly Technology Was Designed With Fish In Mind 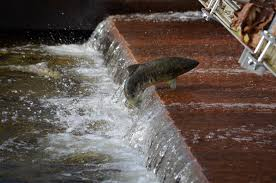 Researchers from Cornell University published a study (see attached) in Nature on the adverse ecological effects of hydropower dams. The study examines how these dams block the flow of water, creating large inundated reservoirs of water conducive to the production of methane gas, a key factor of climate change among the greenhouse gases.

But hydropower plants also affect the migration of fish. According to NOAA Fisheries, in the US, more than two million dams and other obstacles block fish from migrating each year. Reduced fish populations affect the entire ecosystem in rivers and streams.

In reservoirs created by large, channel-spanning dams, it can be nearly impossible for certain types of fish like juvenile salmon, which rely on actively flowing water to drift downstream to the ocean to make the journey successfully. According to NOAA Fisheries, the last remaining populations of Atlantic salmon in US waters exist in a few rivers and streams in central and eastern Maine.

A California-based renewable energy company that makes sustainable hydropower solutions, Natal Energy says that it has created technology that eliminates the need for large, channel-spanning dams. Natel Energy has raised $45.8M to date.

The female CEO and co-founder Gia Schneider says their technology works with low drops - five to 30 feet instead of the high dams - 100-900 feet - needed for conventional turbines.

Schneider says the company's restoration hydro turbine technology is fish-safe in several ways because it enables river restoration elements to be incorporated into the hydropower plant design and the blade design is designed with fish in mind.