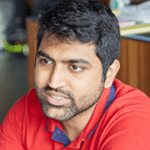 Sanitation is often the conversation left behind when we address the problems related to water. In 2017, globally while 71 percent of the population had access to safe drinking water at a household level, only 45 percent of the population had access to safely managed sanitation (WHO 2019). This situation is a lot worse in schools and health care facilities (JMP 2020).  The case of urban sanitation is particularly interesting as the overall numbers seem to show that the cities often fare much better than their rural counterparts. Figure 2 shows that baring few exceptions, most countries have higher coverage in urban areas, compared to rural areas as indicated by the points above the median line. However, the situation in the former is more challenging to handle due to the issues of population density, migration, urbanization, and sheer urban poverty. These challenges make providing sanitation solutions more complex, since the planning and implementation of sanitation programs in cities are difficult. Therefore, conventional sanitation approaches of the past decades have not solved this problem.

Urban vs Rural sanitation in 2015. Refer to:  www.ourworldindata.com

That is perhaps a reason for the emergence of the new paradigm that is Citywide Inclusive Sanitation (Lüthi et al., 2020). CWIS in short moves away from conventional approaches while incorporating six key principles – 1) Equity 2) Public and Environmental Health 3) Mix of Technologies 4) Comprehensive Planning 5) Monitoring and Accountability 6) Mix of Business models (Narayan et al., 2020). This implies that programming sanitation according to these CWIS principles just got even more complex, especially since all these principles require contextualized planning. Such planning has to be comprehensive, stakeholder driven, suited to local conditions, and with consideration to social and cultural norms.

The Case of India

The “Swachh Barat” or Clean India mission for the first time put sanitation at the center stage drawing political priority from the highest level. Backed by a cumulative funding of 20 Billion USD over 5 years (2014-19) and a well thought behavior change campaign driven by narratives from all social levels, the mission was achieved in making the country open defecation free (Iyer 2019). However, there two major things that Swachh Barat Mission (SBM) did not fully focus on is the urban component and rest of the sanitation value chain. SBM was largely rural focused, building 110 million toilets lifting 600 million people from practicing open defecation. Similarly, the focus was on toilet provision, and not on managing the entire value chain from source to treatment. This results in that fact that only 33% of urban wastewater in India is treated.

On the other hand, older policies such as the National Urban Sanitation Policy (NUSP) and newer schemes such as the ‘AMRUT’, focus on dealing with the same challenge of providing 100% safely managed urban sanitation. The NUSP from 2008, is a policy that is well aligned with the CWIS principles, and in fact puts urban sanitation planning in the limelight. The City Sanitation Plan (CSP) that NUSP recommends is a comprehensive planning approach that is cross-sectoral and aims to be the go-to document for city managers in all aspects covering sanitation (including water supply, solid waste and storm water drainage). Despite of CSP being the core instrument of implementing the vision of the NUSP, the support of international agencies such as GIZ and World Bank in implementation and in developing a practitioner’s framework in operationalzing the CSP, it is still considered at large a failure in delivering the impact it promised.

Where the CSP fits in the larger context of urban sanitation policy in India. Refer to:  GIZ Support Program for NUSP

Few reasons for the failure of the CSP approach in India were analyzed (Narayan et al., 2020b) through a detailed mixed-methods study. They are in no particular order as follows:

With the advent of CWIS, planning for urban sanitation is all the more important, and conventional planning approaches will not meet the required level of comprehensiveness. From the case of India, we can understand that even with the backing of a good policy, a disabling environment for planning could result in a failure of the policy itself. Therefore, a holistic new approach to planning citywide inclusive sanitation is the need of the hour.

Abishek Narayan is a doctoral researcher at the Swiss Federal Institute of Aquatic Science (Eawag). His interests are in Urban Water, Sanitation and Solid Waste for Development. He is an alumnus of the Oxford water program (WSPM) from 2016.