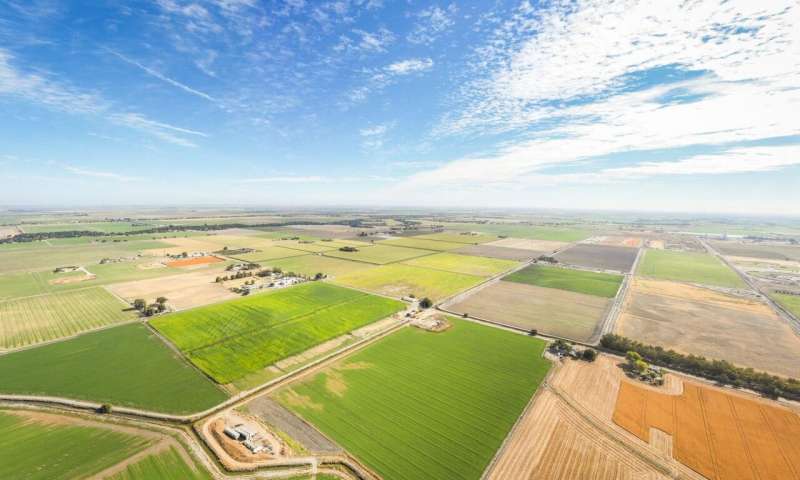 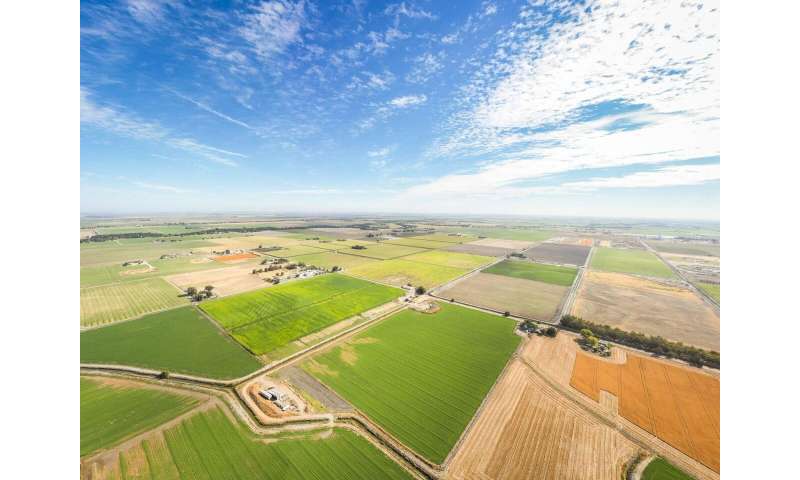 New work from UC San Diego could be revolutionary for managing groundwater use in agricultural regions around the world, as groundwater monitoring and management have been notoriously difficult to carry out due to lack of reliable data. Credit: adamkaz

Researchers at the University of California San Diego report in a new study a way to improve groundwater monitoring by using a remote sensing technology (known as InSAR), in conjunction with climate and land cover data, to bridge gaps in the understanding of sustainable groundwater in California's San Joaquin Valley.

Their work could be revolutionary for managing groundwater use in agricultural regions around the world, as groundwater monitoring and management have been notoriously difficult to carry out due to lack of reliable data.

The satellite-based InSAR (interferometric synthetic aperture radar) is used to make high-resolution maps of land surface motion in space and time, including measurement of subsidence (or sinking). Subsidence can occur when large amounts of groundwater are removed from underground stores, called aquifers.

The study, published in the journal  Environmental Research Letters , took advantage of the incredibly fine-scale resolution of InSAR to evaluate subsidence patterns according to crop type, revealing surprising results. For example, despite reports of high water consumption by fruit and nut crops in California, the crop types with the greatest rates of subsidence, and by association the greatest rates of groundwater use, were field crops such as corn and soy, followed by pasture crops like alfalfa, truck crops like tomatoes, and lastly, fruit and nut crops like almonds and grapes.

"Our initial hypothesis was that fruit and nut crops would be associated with some of the highest rates of subsidence, but we found the opposite," said study lead author, Morgan Levy, an assistant professor with a joint appointment with UC San Diego's Scripps Institution of Oceanography and School of Global Policy and Strategy.

Because displacement is a response to groundwater storage change in locations with varying geology, soils and vegetation, the interpretation of InSAR varies across locations, unlike satellite measurements of climate that have the same interpretation in any location. Therefore, InSAR must be combined with other sources of geophysical data to achieve location-specific insight into groundwater use. 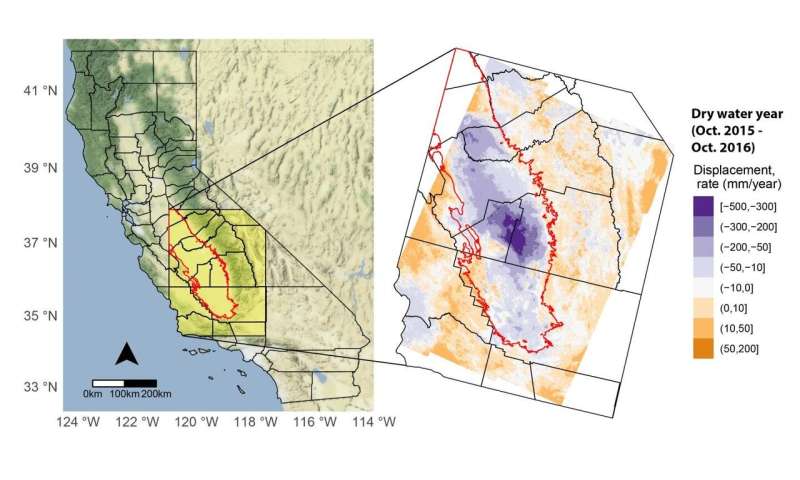 By combining InSAR with other land surface datasets including land cover, potential evapotranspiration (a measure of plant water demand), and the location of surface water supply networks, UC San Diego researchers found that between 2015 and 2017, subsidence occurred at much higher rates in irrigated cultivated land compared to undeveloped land, and in dry surface water-limited years relative to wet years.

"The outcome might be explained by two things. First, on average fruits and nuts require less water physiologically, compared to field and pasture crops. Second, field and pasture crops tend to use irrigation methods that are less efficient and higher-volume than those used by fruit and nut crops," Levy said. "However, fruits and nuts may still consume greater total volumes of water because they occupy more land area, even if their groundwater use intensity is less."

Methods and findings from this research could be used to support the state's ongoing effort to prevent overdraft of groundwater aquifers. Groundwater is a critical resource both nationally and globally: In the U.S., groundwater is a source of drinking water for roughly half of the population, and constitutes the largest source of irrigation water for agriculture. Irrigation accounts for approximately 70 percent of total U.S. groundwater withdrawals, and California has the highest rates of groundwater pumping in the nation.

"Our findings indicate that in the Central Valley, the costs and benefits of transitions away from field crops and towards fruit and nut crops in recent years are more complex than typically assumed," Levy added. "Our results suggest the possibility that transitions to fruit and nut cultivation might be desirable, at least from a groundwater sustainability perspective, although more research is needed to confirm this." 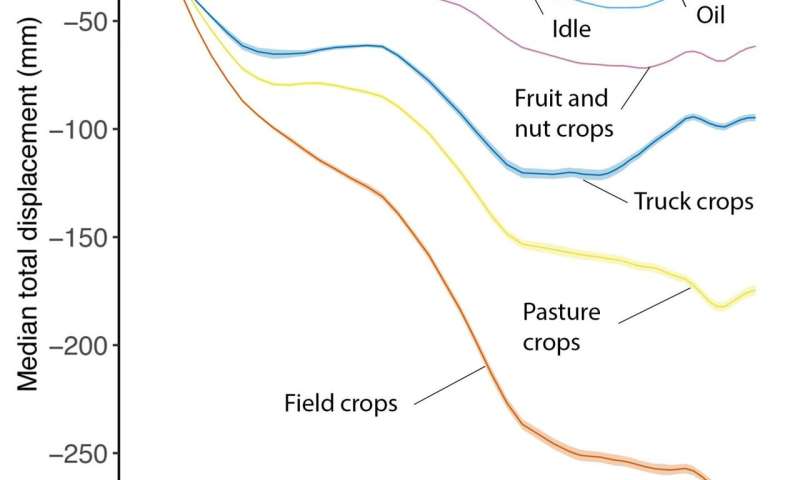 California is an example of a semi-arid and irrigation-dependent climate for agriculture. Coordinated efforts from the UC San Diego team of climate scientists and geophysicists to link subsidence, groundwater and surface water use, and crop production data across comparable time and space scales has tremendous potential to advance groundwater monitoring and management in agricultural regions in other parts of the world, said the authors.

In the San Joaquin Valley during wet years, farmers may receive up to 100 percent of their surface water allocations, while in extremely dry years, they may receive none. When surface water supplies are unavailable, farmers mine groundwater. Thus, groundwater has become increasingly important under climate change, as California and many parts of the world have experienced surface water shortages. However, excessive pumping does occur, even in relatively wet years. And, aquifers can run out.

In 2014, California passed legislation mandating a gradual, locally led shift towards sustainable use of groundwater—the resource on which 85 percent of its population and much of its $50-billon agriculture industry rely. The data from InSAR can be critical to the state's efforts to perform effective monitoring and management in response to climate change.

While the legislation has encouraged local agencies to begin to use InSAR for documenting land subsidence, uses of InSAR for direct monitoring of groundwater use are early in their development. The UC San Diego research efforts provide an example of how water managers might use satellite data sources, including InSAR, to directly monitor local relationships between subsidence, groundwater pumping and crop portfolios.

"The promise of InSAR lies in our ability to combine it with other sources of geophysical and social data to answer water policy-relevant questions," Levy and co-authors wrote. "We provide a preview of the power of such a synthesis, demonstrating that spatial patterns of subsidence and their relationship to agricultural cultivation and associated water demand are clear and robust."

They concluded, "Our findings suggest that policy levers supporting sustainable groundwater management might benefit from consideration of the groundwater use intensity of crop selection, not only the difficult-to-define sustainability of groundwater extraction volumes over groundwater aquifer boundaries that remain uncertain and that are costly to delineate."