Defying gravity
We have come a long way from using “egg” cans filled with a sterilized soil- or sand-based “U.C. Soil Mix.” Container production using blow or injection molded plastic containers, bark-based media, and controlled-release fertilizers has eased production stresses and increased crop quality for many growers. Specialized media and fertility blends have broadened the number of species produced and sold year-round. There is now less disease pressure thanks to media with good drainage and higher air space, and the process of harvesting has been streamlined. The norm has been static for almost four decades though, with only small advances in container design, micro-irrigation, and agrichemical delivery technologies. We propose reimagining the media, and believe that stratifying soilless substrates is an inexpensive, non-invasive technology that can save water and agrichemicals while maintaining or improving crop growth, quality, and time to sale. This begins by utilizing specifically engineered substrates that are stratified within a container.

What is stratification?
Stratification is the layering of multiple media (synonymous with substrates) in a single container to beneficially manipulate the system. This approach mimics natural soil horizons and has also been used effectively in many industrial and environmental applications. Unlike prior research of using “mulch” in containers, the layers are within the normal rooting volume. Two major stratification techniques are currently being evaluated throughout the U.S.: 1) placing a fine or fiber amended pine bark above a coarse substrate to manage water and fertility; and 2) placing a coarse substrate above conventional substrate (C. Marble at UFL in collaboration with J. Altland) to manage weeds. This article will focus on the first described technique of substrate stratification.

Fig. 1 Conceptual visualization of moisture distribution post irrigation in a conventional and stratified substrate in relation to container height.
Why stratify?
Because we believe the solution is in the container. In the last decade, new technologies that promised greater nutrient and water use efficiency, such as clay amendments or in situ moisture sensors, have yet to be adopted due to complexity, costs, commercial availability, or lack of robustness for industry application. These approaches have focused on unfamiliar substrate amendments or reliance on computer algorithms to control irrigation using remote sensor networks. We propose that the simplest and most direct solution is keeping resources in the container by utilizing conventional substrate components, modified by layering two or more substrates within a single container. Since the inception of stratification in containers, by placing fine or fibrous, fertilizer amended substrate above an unfertilized, coarse, well drained substrate, our goal was to improve retention of water and fertilizer in the container. 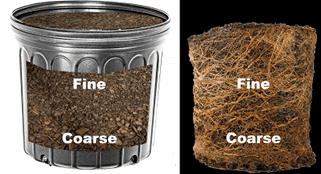 Fig. 2 Illustration of a fallow (left) and image of a rooted (right) stratified substrate in which a fine bark substrate was placed atop coarse substrate. The right image is of a rooted, saleable #15 maple that received a 20% reduction in water and controlled release fertilizer applied as a top-dress.

This approach allows us to overcome the issue of water channeling, in which water moves directly through the pot when irrigated, as if in a straw. This phenomena and lack of root development also results in leaching, causing unused fertilizer to be wasted from the bottom of the container during crop establishment. In addition, stratifying the substrate can address the undesirable moisture gradient (dry on top and wet on bottom) and potentially lessen or eliminate the “perched water table,” a result of container shape and a uniform fill of unlayered substrate. Adoption of this technology is made possible by the fact that individual substrate components can be selected, modified, and blended to create specific physical and chemical properties. Many producers already fill containers in two stages to ease potting and ensure correct liner placement or height: filling the bottom of the container first, placing the liner, and then adding the substrate around the liner in the top portion of the container. Thus, three primary topics informed our decisions when engineering stratified substrates to enhance production of containerized crops: the substrate itself, fertility practices, and irrigation type and scheduling.

Substrate: The substrate profile of any given container has a water gradient, being wettest on the bottom and driest on top. Currently, a substrate or blend is chosen to hold enough water to quickly establish liners while minimizing disease pressure (approximately 25% to 30% minimum airspace); often receiving frequent and excessive water to ensure the shallow planted plug or liner does not dry out. This leads to prolonged waterlogging or saturation of the substrate at the bottom of the container; many times, this problem becomes evident as a sour, rotten egg smell which indicates hypoxic (i.e., lacking oxygen) conditions. The layering of fine bark (< ¼ inch) or fiber amended (i.e., 25% peat or coir by vol.) bark (approximately < ½ inch) above a coarse bark (> ¼ inch) can alleviate the zone of saturation at the container bottom and result in more even water distribution, “defying gravity” throughout the container profile. This in turn ensures available water in the top portion of the substrate and adequate oxygen throughout the container profile for rapid root exploration and development. As roots grow, the water holding capacity of the lower, coarse strata will increase ensuring that water does not become limiting. 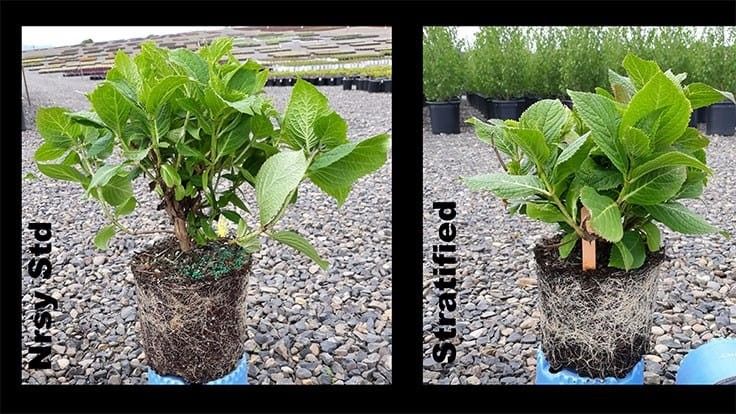 Irrigation: When irrigating, water enters the dry substrate, channeling (i.e., preferential flow) directly through the profile, and leaching from the bottom of the container throughout the irrigation event. This is worsened with the use of single versus cyclic irrigation (i.e., water is divided into multiple sets per day), as well as with the use of spray stakes in which a large amount of water is applied quickly (e.g., second or minutes). The ability to add a finer texture substrate, amended with peat or coir, on the top half of the container to encourage the development of smaller, not entirely dry substrate pores, decreases the rate at which water enters the substrate (i.e., infiltration rate) and subsequently slows water movement throughout the profile. The slowing of water movement through the substrate enhances water capture and reduces leaching of water and subsequent agrichemicals.