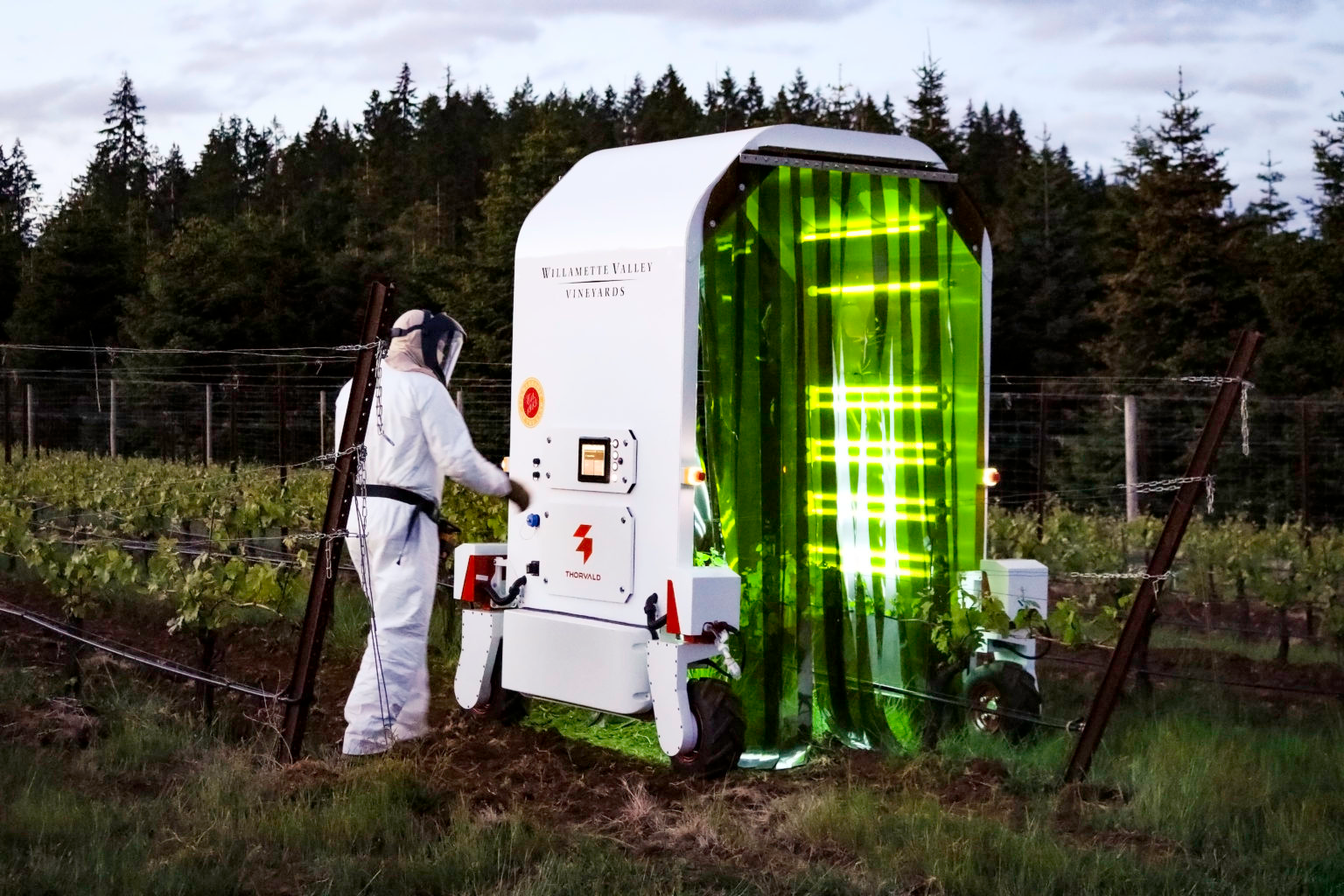 The wine industry has been slower than others when it comes to normalizing the use of technology. Tech seems antithesis to the romance, poetry and culture, that’s fueled wine business for centuries. Further, mechanization—especially in terms of viticulture—is often associated by many with high-yielding, poor quality grapes producing masses of lower quality wines.

But recent innovations now allow wine growers to utilize technology without negatively affecting grape or wine quality. In fact, many result in grapes growing to full potential— despite climate-change challenges.

“I first learned about the existence of the electric tractor through Carlo Mondavi,” Boberg says, adding that the notion appealed to him “immediately.”

Boberg reached out to Monarch Tractor, based in Livermore, Calif., and signed up as their first client in Oregon.

“We’re hoping to get them in January or February,” Boberg says. “Right now, they’re being hand-built, and they’re testing out prototypes to work out the kinks. The manufacturing line will gear up in November. I see them as a game-changer because they’re autonomous; they remove weeds and they also provide crop data.”

The one Boberg is eyeing is competitively priced at about $50,000. Comparatively, Diesel tractors typically retail for between $35,000-$70,000. But, according to Monarch’s findings, an electric tractor can save about 53 metric tons of carbon dioxide annually. And the fact that the electrical engine can simply recharge in any standard electrical outlet, saves on the cost of fuel as well.

“By using an autonomous robot to apply ultraviolet light, UV-C, to the vines, it allows us to protect wine grapes, without using fungicide,” says Jim Bernau, founder and CEO of Willamette Valley Vineyards. “Powdery mildew can devastate a crop, increasing acidity and reducing anthocyanins. Deploying a robot to fight mildew is remarkable opportunity to stop using fungicide, which has effects on all forms of life.”

Willamette Valley Vineyards CEO & Founder Jim Bernau with UV-C Robot
Indeed, fungicide has been linked to everything from deformities and acute toxicity in aquatic life to brain degeneration in humans.

In the U.S. alone, about 100 million pounds of chemical fungicides are deployed each year, with many developing resistances to the fungicides, and counter-intuitively increasing their use.

Bernau says they bought Will-e for $75,000, and hope that it will quickly pay for itself. “It’s autonomous, so you have reduced labor costs, you don’t have to pay for the chemicals. And not using a tractor to spray chemicals will further reduce the carbon footprint and reduce soil compression in the vineyard,” he notes. His robot is an experimental model, but Bernau says they should be ready to hit the market at some point in 2022.

Bouchaine Vineyards, in the Napa Valley, has teamed up with Cisco Systems to track temperature, light, humidity and water availability, block by block, across its 100-acres estate. The technology also offers insight into tannin development by measuring the amount of light hitting individual grapevines.

The motivation for installing Cisco Industrial Asset Vision, Bouchaine’s winemaker and GM Chris Kajani says, is to not just figure out when grapes in certain sections are primed for harvest, but to reduce their dependence on water. A drought emergency has been declared in more than 40 counties in the Golden State, including Napa, Sonoma, and Mendocino.

“We began cutting our irrigation dramatically in 2015,” says Kajani. “These sensors allow us to further dial in irrigation based on data, not solely visual cues.”

Bouchaine hopes to save up to 20 gallons of water per vine with Cisco’s monitoring system.

“We started with a few neutron probes, but now we have 14 different ones to match soil profiles across the vineyards,” Becker says. “They measure water availability in the soil, and allow us to track the history of each vintage year over year, allowing us to minimize water use based on current and historical needs.”

This is Becker’s second year working with VineView. The mapping system provides insight on irrigation, variability in soil moisture and vine growth across parcels—and precise grape-ripeness measurements, so Becker knows “where fruit needs more hang time or more water to improve the quality.”