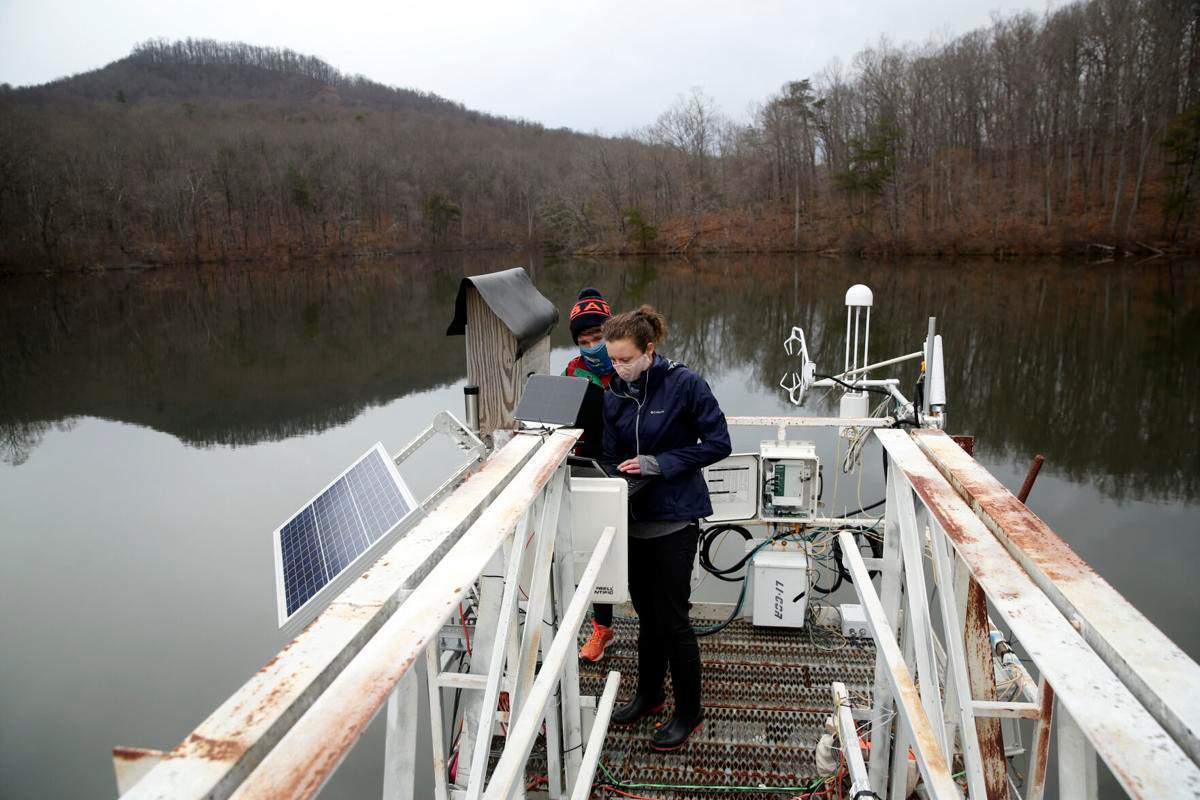 There are smart phones, smart cars and smart homes. And now, a team led by Virginia Tech professor Cayelan Carey continues to pursue what’s believed to be a first: a smart reservoir.

In 2018 Carey and her colleagues partnered with the Western Virginia Water Authority to develop and test their technology in Falling Creek Reservoir, the smallest of four reservoirs that distribute water to the city of Roanoke.

At different depths of the lake, levels of progressing darkness and density within the body of water, Carey’s team has set up sensors to take precise measurements. They are reading the temperature, the levels of oxygen, concentrations of carbon, nitrogen, phosphorous, the growth of algae, the presence of metals: factors that allow them to predict how the lake is going to behave over the next several days.

“We call it FLARE, which stands for forecasting lakes and reservoir ecosystems,” Carey said. “Probably the best way of describing it would be a water quality forecasting system.”

FLARE collects key pieces of data and generates a forecast. Once a day, the Western Virginia Water Authority receives that updated feed and looks ahead 16 days, which gives the treatment plant the advantage of knowing what to expect when it comes to water quality management.

Carey recalls her experience at the start, nearly a decade ago: “You make observations about what is going on in the water in terms of water quality, but it’s almost not useful at that point because you needed that information a few days ago if you were actually going to make a change or some type of management intervention.”

So, Carey said, she decided to improve the system. She conceived her water quality forecasting technology and proposed it to the water authority for development and implementation. The project started after Carey’s team received a $1 million grant from the National Science Foundation.

Carey’s team has installed 18 electronic sensors in Falling Creek reservoir, which feed data digitally to the modeling program which develops their forecasts.

Equipped with a FLARE forecast, water managers can be proactive about treatment and prevent problems from developing in the lake rather than dealing with them in the treatment plant.

Jamie Morris, the authority’s water production manager, said he has already had success working with the system. The forecasts help him monitor and regulate oxygen levels in the lake. An aeration system reaches into the lower levels of the reservoirs he manages to pump in oxygen where it is most scarce.

“When your oxygen gets depleted, a couple things happen. Any metals sort of settled out [such as iron and manganese] can get back in the solution and those are easily transferred into the process through the raw water. And those are very problematic,” Morris said.

He also holds the opinion that adding oxygen has helped to dissipate high algae levels.

Another event the water authority has to deal with every year is temperature changes. In the summer the top of a lake warms up and the bottom stays cold which means that the chemistry of the top and bottom stay separated, with heavy sediment at the bottom. But as the temperature gets colder outside, the top cools, and the two levels get closer. Eventually, the lake “turns over,” as the mixing event is called, and sediment containing nutrients and metals from the bottom comes up to the top. Knowing exactly when and where this event will occur allows the water authority to draw water from an undisturbed part of the lake or another source entirely.

A FLARE forecast helps Morris to steer the treatment he needs.

“We’re seeing it improve to the point where it can be a very practical tool for a lot of municipalities,” he said.

FLARE has been successful in making temperature forecasts that are accurate within fractions of degrees and is fine-tuning the oxygen forecasts. Plans are under way to expand the project to Carvins Cove, Roanoke’s largest reservoir, next year.

Roanoke doesn’t have a lot of water quality issues, according to Morris, but other areas of the country where the temperature is warmer or where more organics leach into the water have had major problems that FLARE could be instrumental in anticipating and diffusing.

In 2014, for example, Lake Erie had a major algal bloom which threatened the water supply; the Chesapeake Bay also experiences algal blooms annually. These blooms can umbrella over huge portions of a lake, blocking sunlight, sucking oxygen out of the water and pumping toxins into it. As temperatures rise, scientists only expect algal blooms to increase, said Madeline Grupper, a graduate student working with Carey.

Identifying trends such as these and developing predictive models, the way that Carey’s team is doing for reservoirs, has been a major subject of research in the ecological sciences.

Local water utilities, private companies, and independent scientists have all reached out to Carey with interest in utilizing FLARE. She has already started conversations with cities across the U.S., in Canada, Ireland, and Sweden who are excited to implement the forecasting system she and her team are developing.

“Our forecasts for drinking water fit really nicely within the larger scope of making ecology and the environmental sciences more predictive in nature,” Carey said.

“People have been looking at forecasts of the presidential race, forecasts of COVID, forecasts of weather,” said Quinn Thomas, a co-leader of the Smart Reservoir project who designed the mathematical modeling system that generates the forecasts.

“We’ve been thinking a lot about weather forecasting for decades, but now we’re transferring that thinking to many aspects of nature,” Thomas said.

Particularly, as scientists expect temperatures to rise and anticipate unprecedented climatic changes in the near future, many ecologists are looking to ecological forecasting to provide a map of that process and a way to navigate it.