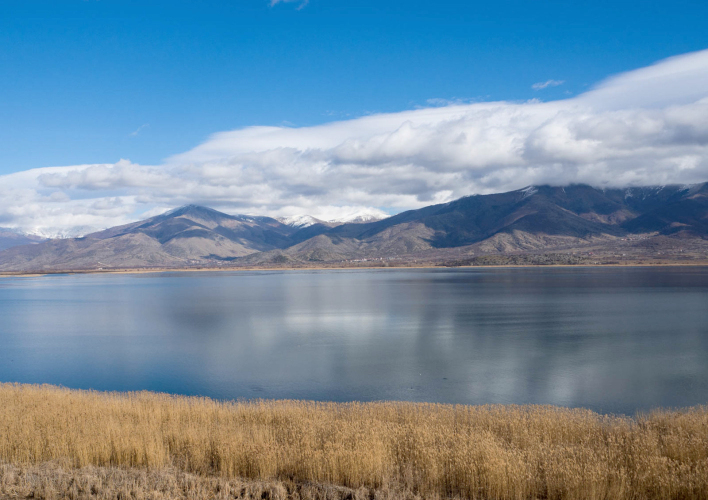 Last week communities around the world celebrated World Wetlands Day, an event held to raise global awareness about the vital role of wetlands in supporting biodiversity and human wellbeing.

During online conversations around the event we discovered a fascinating short film titled  ‘Wetlands: Havens of Life’ . The film, made by author Julian Hoffman in collaboration with The Wetlands Initiative, documents the rich cultural and ecological diversity of the Prespa Lakes in Southern Europe.

Julian is an award-winning landscape writer who has lived in the Prespa Lakes region since 2000. His most recent book  Irreplaceable: The Fight to Save our Wild Places  explores vital conservation and restoration projects in imperilled ecosystems across the world. We spoke to Julian to find out more about his film, the Prespa Lakes, and the value of wetlands.

Tell us a little about the Prespa Lakes – what makes them special?

The enduring image of Greece will always be of islands, seas, whitewashed villages and ancient ruins, but there is a whole other country of diverse landscapes beyond that iconic picture, which includes a place like Prespa. The Prespa Lakes – Great and Lesser – sit encircled by high mountains in the far north-west corner of Greece. Not only are they ancient lakes, and amongst the oldest in the world, but they are also shared by three countries – Greece, Albania and North Macedonia. And it’s this being at a crossroads – both culturally and geographically, as they’re a connecting point between Mediterranean and Balkan alpine ecosystems – that lends them such a distinctive quality.

Along with supporting varied human communities around their shores, they host a remarkable range of wildlife. Large numbers of waterbirds, including night herons, little bitterns and squacco herons, nest in the vast reedbeds of Lesser Prespa Lake. Of the 23 species of fish found in Prespa’s lakes and rivers, 9 of them are endemic to the region. And Prespa is home to around 1,400 pairs of Dalmatian pelicans, making it the world’s largest colony of a species officially listed as Near Threatened, where these remarkable birds nest alongside some 600 pairs of white pelicans too. The Prespa lakes are a place of unique ecological and cultural richness.

What is your connection with the lakes and the wider region?

My wife and I moved to a small mountain village above the lakes in the Greek part of Prespa back in 2000 after reading Giorgos Catsadorakis’ excellent and evocative book  Prespa: A Story of Man and Nature  while we were living in London. Two decades later and we’re still here, partially because the place has such a compelling ability to continually fascinate and surprise. It’s a very rural place, yet at the same time it’s beautifully cosmopolitan too, being a gathering place for different cultures, languages, histories, habitats and species.

Much of my writing about the natural world and our human connection to place has emerged out of a relationship with the lakes region, and my wife works for the Society for the Protection of Prespa, a local environmental organisation that has been instrumental in protecting the lakes’ natural and cultural values for the past three decades. They work closely with the local community, and part of my wife’s work involves a transboundary network called PrespaNet, which brings together environmental organisations from the three countries that share this watershed. While these countries have long had their political and historic differences, seeing the cross-border engagement between organisations and ecologists around common issues of water, climate and biodiversity is profoundly positive, reminding us of the many commonalities that borders tend to obscure.

How did you become involved with The Wetlands Initiative? What work does the organisation do, and why is it important?

I came to know about The Wetlands Initiative (TWI) when I spent some time at the Midewin National Tallgrass Prairie just outside of Chicago while researching my recent book,  Irreplaceable . This prairie – which is now a beautiful and beguiling blend of grasslands and wetlands – had been restored from a sprawling military ammunition depot, where the US government manufactured and stored extraordinary amounts of ordnance over the course of several decades. As a result, the land was largely ruined. But there was a vision to heal it, and when the government officially passed the land into the care of the US Forest Service, TWI was at the heart of the ensuring actions, making possible an extraordinary transformation.

It was the first time I’d ever witnessed a large-scale ecological restoration project and I was overwhelmed by the dramatic changes. The songs of chorus frogs pulsed from the marshes and bison grazed the grasslands as they would have done in the past. It had the feel of a world being remade. Midewin is a stunning and inspiring testament to what is possible when we channel our energies towards a respectful relationship with the natural world. And TWI’s overarching mission to restore wetlands in both Illinois and Indiana, including on the South Side of Chicago, where local communities have lacked access to green spaces because of industrial and residential sprawl, means there’s a greater chance that a positive future for both humans and wildlife can unfold in those places.

Tell us about making your  ‘Wetlands: Havens of Life’  film at Prespa – what was the catalyst for its production, and what did you want to communicate with it?

Last year I was supposed to give a talk for TWI in Chicago as part of their 25th anniversary festivities. The event was naturally cancelled because of the pandemic, but we still had this deep desire to honour and recognise this achievement and to find some way of celebrating it and the larger meaning of wetland protection and restoration. It was then that TWI asked me whether I’d be interested in making a film about wetlands here in Prespa. As my focus for the talk would originally have been on the work of TWI, it meant suddenly recalibrating my attention back to my home place. But in a way that made complete sense, because while in some respects this terrible pandemic has emphasised the distance between us, it has also revealed a greater sense of solidarity, too. And while the wetlands I live beside in Greece are a very long way from the ones TWI works with in the American Midwest, we share a love for them that acts as a bridge.

I think with the film we wanted to communicate the idea that no matter where in the world wetlands are found, they are part of a much larger network of waters that nourishes a wide spectrum of wildlife, habitats and human communities. It’s these many complex connections, in a sense, that make us all tributaries when it comes to the greater meaning of wetlands, linking us together through water.

Following the insights of your  Irreplaceable: The Fight to Save our Wild Places  book, what might wetland conservation and restoration tell us about environmental management and ethics in an Anthropocene age?

A few years ago, I traced autumn bird migration from the south of Spain to Morocco to see what traditional salt pans meant for journeying birds. My final destination was a set of salt pans being restored near the Moroccan town of Larache. The pans and lagoons had been closed a number of years earlier by their owner, effectively shutting down an important staging post for migratory birds, which, according to the ecologist I spent time with there, had a record of hosting 15,000 glossy ibises in a single day. Since they’d shut, however, he said that almost no birds stopped there anymore. But on the day we arrived, as water was beginning to flow once more, providing vital jobs for the local community and restoring a relationship between that place and migratory birds that had been severed as soon as the waters evaporated, the wetland was thriving with birds again. Avocets, storks and godwits. Ospreys, redshanks and herons. Egrets, spoonbills and glossy ibises, too. It was an extraordinary spectacle of life and movement to see, especially given the description and photos the ecologist had given me that depicted the place only a few years earlier when it was dry. And what it made we realise is how actions that might seem small in the larger scale of things can have profoundly transformative effects.

For the poor community of labourers that lived by the lagoons, a vital opportunity for livelihood was viable once more. For the thousands of birds feeding there that day, their safe journey across the Sahara or survival over winter on the African coast was made more likely. Neither the wellbeing of humans nor the wellbeing of wildlife needs be to the exclusion of the other. I think it’s imperative that we enlarge our sense of home so that it includes the more-than-human in its embrace. And wetlands are good examples of the possibilities that arise when we do, whether that’s here beside two ancient lakes in the Southern Balkans or on a set of small restored salt pans in Morocco. It’s the intention at the heart of the gesture that matters.

Julian Hoffman website.
‘Restoring Wetlands: a path into the future’  essay for the 25th anniversary of the Wetlands Initiative in 2020.