What are the reason and problems of over utilisation of water. 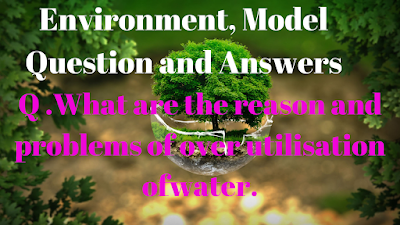 Following are the reason of over utilisation of water.   (

i) Careless attitude : Many water problems have arises because the careless and wasteful attitude of the people. Persons living on the banks of rivers and streams dump untreated sewage and other wastes into rivers and takes and pollute the water. Some persons so careless that they do not bother to close their water tapes after use and do not get their making tapes repaired.

(ii) Lowering of water tables : Due to excessive pumping of ground water, the water table has gone down in different states of India like Punjab, Haryana, UP and Tamilnaidu

(ii) Lowering of water tables :  Due to excessive pumping of ground water, the water table has gone down in different states of India like Punjab, Haryana, UP and Tamil Naidu.

(iii) Water in agriculture :  Lot of water is being wasted throughevaporation and seepage in open irrigation channels. Poor water management like use of exces water for irrigation leads to many problems.

(vii) Water pollution :  Pollution of ground water by the use of fertilisers, pesticides etc. in agriculture and toxic chemical in different industries is very common these days. Moreover, rivers and other water bodies are being polluted by dumping huge quantities of industrial efficient, sewage and domestic waste.

(i) Sinking of overlaying land surface

(ii) Structural damages to nearby buildings

(iv) Reversing the flow of sewers and canals and

2. Lowering the water table :  About 40% of the world's population likes in arid or semiarid regions. These people leave to spend a substantial amount of time, energy and effort in obtaining water for their domestic and agricultural requirements. It is not advisable to do excessive mining and ground water as it would cause lowering of water table in the region, within would decrease the agricultural production in future.

3. Salinity  problems :  In the coastal regions, the continuous depletion of ground water may lead to the movement of saline sea water into fresh water wells. It spoils the quality of water which becomes saline. Irigation with saline water causes salt accumulation in the soil, which reduce crop productivity. Estuaries also become more saline and less productive when surface water is overdown.

4. Soil Erosion :  Surface water from pounds, lakes, rivers etc. is overdrawn to meet the requirement of huge population. It result into drying up of the nearby wet land. Heavy rain runoff causing soil erosion and flooding. Thus, the residents of low land areas are put to the risks of destruction due to flowing. Soil erosion may result in sedimentation of water ways which would harm aquatic life also.