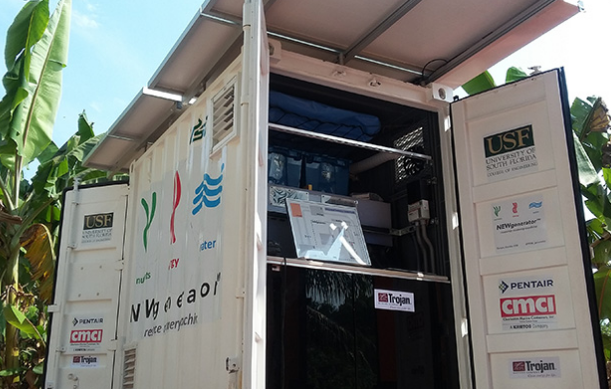 Rapid, unplanned urbanization is becoming a serious threat across the world, because it puts major stress on critical infrastructure such as water and sewer lines.

Building on his team’s success in India, Daniel Yeh, PhD, associate professor of Civil and Environmental Engineering at the University of South Florida College of Engineering, is the principal investigator of a two-year, $1.14 million grant from the Bill & Melinda Gates Foundation to install a new and improved version of his NEWgenerator in Durban, South Africa.

The USF-developed NEWgenerator will soon be installed in Durban, South Africa. It generates nutrients, energy and water by safely recovering them from wastewater.

The NEWgenerator generates nutrients, energy and water by safely recovering them from wastewater containing fecal organic matter and urine. It will accompany a Community Ablution Block (CAB), which is a modified shipping container that has toilets, showers and sinks.

The South African government has provided the CABs to informal settlements that lack such amenities. But with these populations growing rapidly in the urban fringe, CABs are putting a major strain on sewer systems. The NEWgenerator will aim to allow CABs to operate, without being hooked up to sewer lines.

The NEWgenerator mimics a miniature wastewater treatment plant without the usual energy-intensive aeration tank that blows air to break down pollutants and the plethora of chemicals. By harnessing an army of anaerobic microorganisms, the process eliminates the need for oxygen, causing organic material to turn into biogas.

Biogas is a renewable form of energy, allowing the NEWgenerator to generate electricity and run completely on its own when coupled with solar panels.

The NEWgenerator has a multistage disinfection process. First, a fine-pore microscopic membrane filter traps bacteria and viruses. Then, the clean water that passes through is disinfected with chlorine, similar to municipal drinking water. The recycled water can be used for toilet flushing in the CABs, thereby drastically cutting down on water demand, especially during times of drought. The water can also be used for irrigation.